Hi, Kate Messner! Welcome back to Watch. Connect. Read.! It is always a good day when you drop by to celebrate books and reading. Thank you for sharing Breakout’s cover and for finishing my sentences.

Kate Messner: Hi, Mr. Schu! Thanks so much for inviting me to help share the new cover art! Breakout is different from anything I’ve ever written, so it’s exciting (and a little scary!) to know that it’ll be out in the world soon.

Breakout’s cover illustration is from illustrator Christopher Silas Neal, which is such a gift. Chris and I have done several picture books together with Chronicle Books, and I’ve always admired the art he’s done for novels as well. He’s the cover artist for Laurie Halse Anderson’s Seeds of America Trilogy and so many other books that have caught my eye. I especially love what Chris can do with light and darkness on a book cover, so when my Bloomsbury editor asked if I had any ideas for Breakout’s cover art, I asked – okay, begged – for her to reach out to Chris. Happily, he was available and interested! 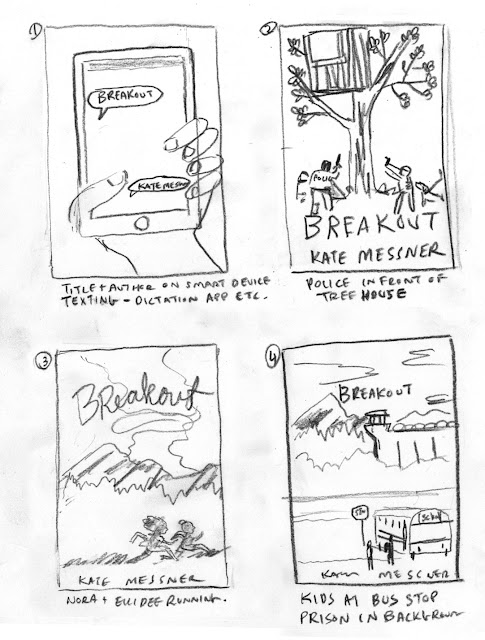 We had some great discussions about these ideas. It’s important for a novel’s cover to make the right kind of promise about what readers will find inside. Ultimately, we wanted to make sure this one telegraphed that Breakout is a book for older elementary & middle school readers, with mystery, suspense, and also some big ideas to think about Here’s one of Chris’s early cover concepts, fleshed out. 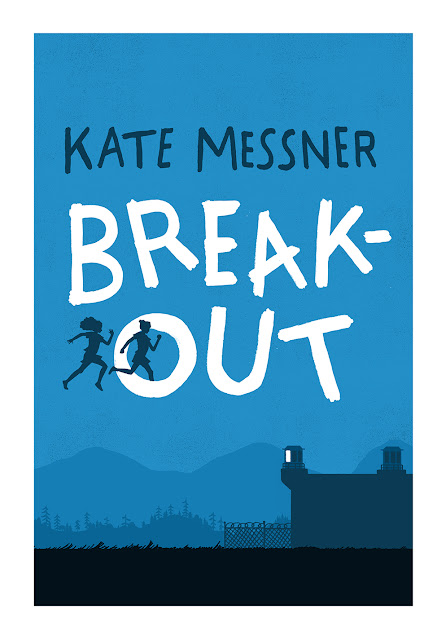 Editor Mary Kate Castellani and I loved the look of this one but were a little worried about showing the two girls running, even though the book culminates with a race. Would readers get the impression that the girls were the ones who’d broken out of prison? Around the time we were having these conversations, Chris and I were both speaking at the Gaithersburg Book Festival in Maryland. It’s not typical for authors and illustrators to collaborate directly on cover art – usually editors and art directors facilitate those conversations – but Chris and I got talking on a shuttle bus back to the hotel from the festival’s author-illustrator reception. In that fifteen-minute ride, we tossed around a whole bunch of ideas.

What if there’s a helicopter on the cover?

And a search light that illuminates the scene below?
Maybe it lights up Owen’s tree fort!

That conversation ultimately led to the final cover, which I really love, because I do think it makes the right promise to readers. This is a story with a lot of tension, where things that are supposed to be familiar and safe, suddenly look different in the glare of a search light. 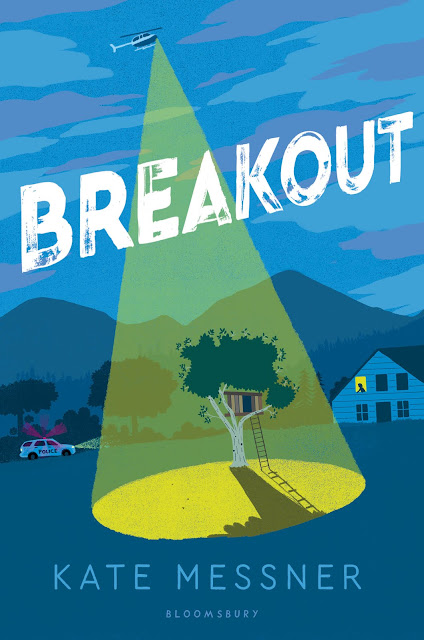 Breakout tells the story of a small-town prison break. The three main characters are Nora Tucker, whose Dad is the prison superintendent, her best friend Lizzie Bruno, whose grandmother is a civilian worker there, and Elidee Jones, who’s just moved to town with her mom to be closer to her brother, who is an inmate. Here’s the official jacket description from Bloomsbury:

Nora Tucker is looking forward to summer vacation in Wolf Creek – two months of swimming, popsicles, and brushing up on her journalism skills for the school paper. But when two inmates break out of the town’s maximum security prison, everything changes. Doors are locked, helicopters fly over the woods, and police patrol the school grounds. Worst of all, everyone is on edge, and fear brings out the worst in some people Nora’s known her whole life. Even if the inmates are caught, she worries that home might never feel the same.  Told in letters, poems, text messages, news stories, and comics – a series of documents Nora’s collected for the Wolf Creek Community Time Capsule Project – BREAKOUT is a thrilling story that will leave readers thinking about who’s really welcome in the places we call home.

I wrote Breakout while a thousand law enforcement officers were scouring the woods and mountains near my house, searching for two convicted murderers who escaped from Clinton Correctional Facility in June of 2015.

I live fourteen miles from the prison, so helicopters circled over practically every night during the 23-day manhunt. Before my careers in teaching and writing, I was a TV news reporter, and whenever something big is going on, I still feel that tug to go see what’s happening for myself. So I drove to Dannemora and hung out at the coffee shop and market across from the prison.

For three days, I sat at a table with my coffee and my notebook, and I listened to people’s stories. A cashier told me how her son wouldn’t sleep in his own room at night. The manager told me they were so busy she’d run out of bottled water and had to call the Pepsi guy to bring more. State police who had come from downstate talked about what they were missing at home, now that they were here, searching our woods. A little boy came in wearing rubber boots with his Halloween firefighter costume and announced that he was going to help. New York City reporters from the Times and the Daily News wondered how we survived up here with such crummy cell service. And inmates’ families told me they were scared. They worried that all the inmates would end up suffering because of those two who’d escaped.

Breakout is a fictional story, set in a fictional town, but it was inspired by many of the stories I heard in the coffee shop that week.

On June 5, 2018, I’ll be out on book tour, sharing this story with readers, and I couldn’t be more excited about that. We’re going to talk about how a ripped-from-the-headlines story like this comes together, through research, brainstorming, drafting, and revising. I’m looking forward to showing kids all the different drafts and sharing how I discovered that a novel-in-documents was the way this story wanted to be told. We’re going to play around with some writing, too -- telling a story through different points of view. I love the way stories like this can help kids understand how other people’s perspectives might be different from their own. My greatest hope is that Breakout is one of those stories that builds empathy and challenges kids to ask questions about privilege and perspective. 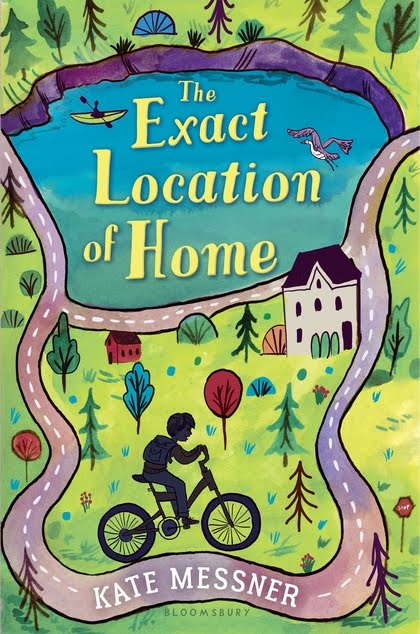 Reading is sometimes a great comfort and sometimes the opposite. The most important books in my life fall in both of those categories, I think. Some are dog-eared childhood favorites that always filled me with magic and made me believe that everything would be all right. But some books that have had the biggest impact on me are stories that made me uncomfortable. Those stories pushed me out of my comfort zone, and I think Breakout may fall into that category for many readers, too. 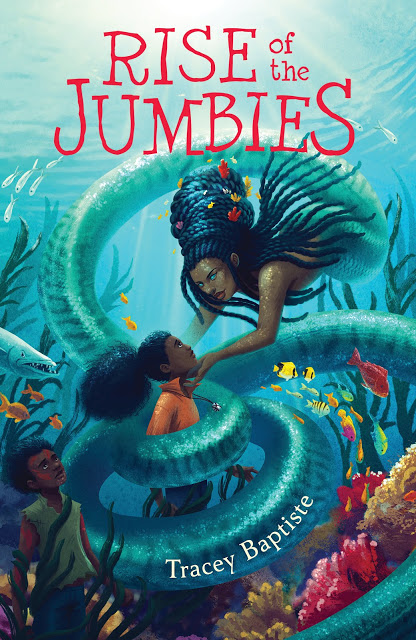 Mr. Schu, you should have asked me what I’ve been reading lately (because I always love to talk about that!)  There are some amazing books coming out this school year, and I’ve had the chance to read some of those a bit early. Tracey Baptiste’s RISE OF THE JUMBIES is an amazing sequel to THE JUMBIES. Jumbies are these terrifying creatures from Trinidad’s folklore. They’re featured in RISE, too, along with a sparkling team of black mermaids. Loree Griffin Burns has a new Scientists in the Field book called LIFE ON SURTSEY: ICELAND’S UPSTART ISLAND, which is my favorite of all of Loree’s books so far. And right now I’m halfway through Justina Ireland’s YA novel DREAD NATION, which is an alternate history of Post-Reconstruction America where special schools train black and Native girls to fight zombies that rose from the dead at the end of the Civil War. Personally, I think this is the alternative history HBO should be doing instead of Confederacy. It’s an incredible page-turner and I think it’ll be a powerful conversation starter in classrooms, too.
Email Post