After you finish admiring the cover for the paperback edition of Raymie Nightingale, please read about Kate DiCamillo's forthcoming novel. Oh, my goodness! My HEART IS SMILING! Congratulations, Kate! 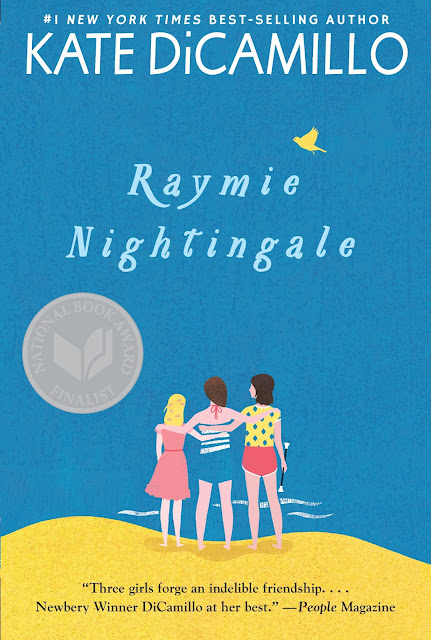 September 19, 2017 – SOMERVILLE, MA – In 2016 two-time Newbery Medal winner Kate DiCamillo’s seventh novel, Raymie Nightingale, was published to overwhelming critical acclaim and debuted as a #1 New York Times bestseller. The deeply moving book about a summer of discovery and friendship went on to be a finalist for the National Book Award for Young People’s Literature. Publisher Candlewick Press is pleased to announce plans to release the novel with a new cover treatment for the first time in paperback on April 10, 2018, ahead of a very exciting eighth novel release by the author.

While fans often ask DiCamillo to write more about their favorite characters, she has never been compelled to revisit the world of a previous novel — until now. In October 2018, for the first time ever, DiCamillo will return to unravel the story of Raymie’s friend and beloved ranchero, Louisiana Elefante. In its 2016 review of Raymie Nightingale, the New York Times noted that Louisiana “is one of DiCamillo’s most singular and arresting creations” and that she “delights on every page.” Fans of Louisiana can look forward to reading the as-yet-untitled book when it releases next fall. The companion novel was acquired by Candlewick president and publisher Karen Lotz in a major deal for world rights from Holly McGhee at Pippin Properties, with senior editor Andrea Tompa to edit.

About the new book, author Kate DiCamillo says: “I was getting ready to start on a project, going through my notebooks and all the phrases and images that I had written down that I thought might turn into a story. This phrase, ‘I am going to write it all down, so that you will know what happened to me . . .’ showed up again and again. And next to it, I had written ‘Louisiana?’ And it was Louisiana. It was her voice. While I had no intention of writing another novel about those rancheros, Louisiana’s voice was so strong and insistent, and her need to tell her story was so profound, that I gave in. And boy, am I ever glad that I did. I loved spending time with her again.”
As previously announced, DiCamillo is also partnering on a Candlewick illustrated book with cartoonist and illustrator Harry Bliss for another new Fall 2018 release, Good Rosie. The story will explore what it means to be both a dog and a friend.

“Kate’s novels feature such appealing settings and lovable characters that it’s always hard to say goodbye, so we were overjoyed to learn that it wasn’t yet time to say goodbye to Louisiana. For readers who already know and love her, Louisiana’s story will feel like a gift, and those who don’t know her yet are in for a treat. There’s so much for Kate fans to look forward to in 2018 — it’s going to be a huge year for her, and we couldn’t be more excited!” said senior editor Andrea Tompa.
Email Post