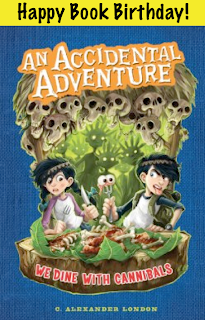 C. Alexander London created a special video to celebrate the book birthday of We Dine With Cannibals (An Accidental Adventure #2). Thank you, C. Alexander, for creating another edge-of-your-seat adventure. I predict it will leave readers clamoring for book three. Happy watching!

C. Alexander London is an award-winning author of nonfiction for grown-ups (under a slightly different not very secret name) and, as his official biography says, he really is an accomplished skeet-shooter, having once won a 12-gauge tournament because no one else had signed up in his age group. He's also a Master SCUBA diver, and, most excitingly (to him) a fully licensed and accredited librarian. He used to know the Dewey Decimal System from memory. He doesn't anymore. While traveling as a journalist, he did indeed watch television in 23 countries (Burmese soap operas were the most confusing; Cuban news reports were the most dull). He survived an erupting volcano in the Democratic Republic of Congo, a hurricane on small island in the Caribbean, 4 civil wars (one of them was over by the time he got there, thankfully), and a mysterious bite on his little toe in the jungles of Thailand. The bite got infected and swollen and gross and gave him a deep mistrust of lizards. Although he has had many adventures, he really does prefer curling up on the couch and watching some good reality television or reading a book. Like Oliver and Celia Navel, he enjoys danger and intrigue far more when it's happening to somebody else. (Bio taken from here.)

Do you live in the New York City area? Attend the We Dine With Cannibals launch party.
Date: Tuesday, November 15, 2011 - 6:00 pm - 8:00 pm
Location: Books of Wonder (18 West 18th Street New York, NY)
Watch the book trailer for We Are Not Eaten by Yaks (An Accidental Adventure #1). It is an exciting adventure with tv-addicted twins, explorers, and humor. A very satisfying read. 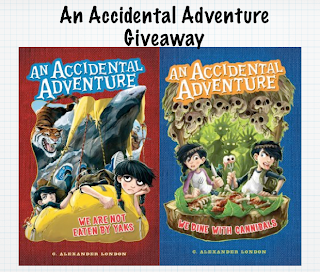 I am giving away We Are Not Eaten by Yaks and We Dine With Cannibals.
Rules for the Giveaway
* The contest runs from November 15 to 11:59 PM on November 18.

* You can fill out the entry form or retweet the link. Please include @MrSchuReads in the tweet.

* If you win We Dine With Cannibals OR We Are Not Eaten by Yaks, I will send you an email or a direct message.

* You must be at least 13 to participate.