Yesterday I shared trailers and resources for half of the 2012 Children's Choice Book Awards finalists. Thank you for returning for part two.

Launched in 2008 by the Children's Book Council andEvery Child A Reader (The CBC Foundation), The Children’s Choice Book Awards program was created to provide young readers with an opportunity to voice their opinions about the books being written for them and to help develop a reading list that will motivate children to read more and cultivate a love of reading. 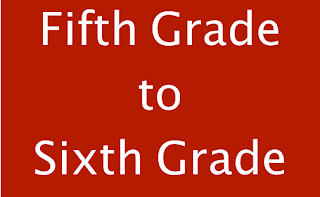 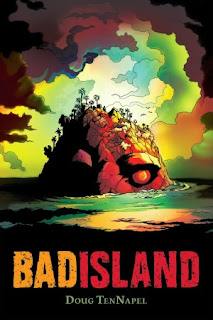 Bad Island . Written and illustrated by Doug TenNapel. Scholastic, 2011.
About the book:
Something on this island is up to no good?

When Reese is forced to go on a boating trip with his family, the last thing he expects is to be shipwrecked on an island-especially one teeming with weird plants and animals. But what starts out as simply a bad vacation turns into a terrible one, as the castaways must find a way to escape while dodging the island's dangerous inhabitants. With few resources and a mysterious entity on the hunt, each secret unlocked could save them...or spell their doom. One thing Reese knows for sure: This is one Bad Island. 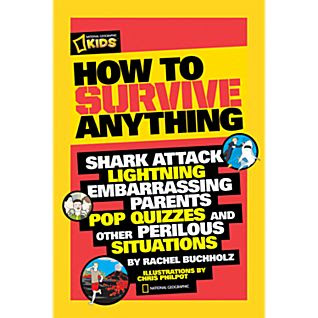 How to Survive Anything. By Rachel Buchholz. National Geographic, 2011.
Let's face it. With school pressures, social pressures, parental pressures, the teenage years are tough. Your best friend is with you one day, dating your crush the next. But it could be worse! You could be face-to-face with an angry grizzly, or chest-deep in quicksand. Never fear, National Geographic has the solution! In this hilariously informative take on surviving the trials of middle school and the jungles of South America, we combine our expertise on nature and adventure with the fun-and-learning approach of our Nat Geo style—and voila,the perfect advice to conquer any obstacle, whether it threatens life or social status or both. Edgy, young, authoritative, and amusingly illustrated, this title will grab the attention of young teens.
************* 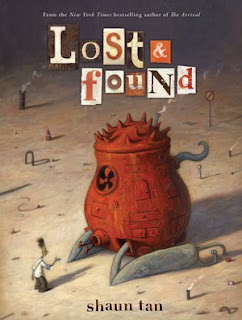 Lost & Found. Written and illustrated by Shaun Tan. Arthur A. Levine, 2011.
About the book:

A collection of three jaw-dropping stories: THE RED TREE, THE LOST THING, and THE RABBITS, by New York Times bestselling author and illustrator Shaun Tan

A girl finds a bright spot in a dark world. A boy leads a strange, lost creature home. And a group of peaceful creatures loses their home to cruel invaders. Three stories, written and illustrated by Shaun Tan, about how we lose and find what matters most to us. 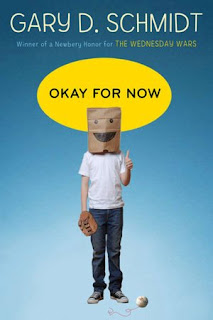 No other 2011 release has been more dissected and discussed, disputed and adored than Gary D. Schmidt's return to the world of Doug Swieteck. This companion to TheWednesday Wars places a skinny-thug Doug in a new town with no friends to speak of. Throw the turmoil of his abusive home life into the mix and you get a book where things could explode at any moment. Doug's refuge comes if the form of two new loves: drawing to match the wildlife paintings of John James Audubon, and for a girl who sees the best in him. The highs are more moving, the lows are more jarring than anything else you'll read in 2011. -Travis Jonker 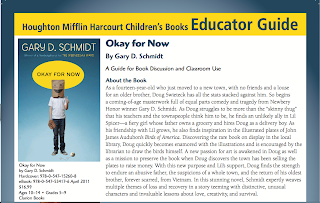 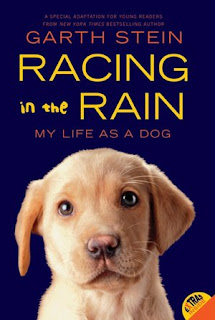 Racing in the Rain: My Life as a Dog. By Garth Stein. HarperCollins, 2011.
About the Book:
Have you ever wondered what your dog is thinking?

Meet one funny dog—-Enzo, the lovable mutt who tells this story. Enzo knows he is different from other dogs. Every dog loves to chase cars, but Enzo longs to race them. He learns by watching TV and by listening to his best friend, Denny, an up-and-coming race-car driver, and his daughter, Zoe, his constant companion. Enzo finds that life just like being on the racetrack. For he sees that life, like racing, isn’t simply about going fast. And, by learning the tricks of racing against all odds, he takes on his family’s challenges and emerges a hero. Enzo holds in his heart the dream that Denny will go on to be a racing champion with his daughter right by his side. For theirs is an extraordinary friendship—one that reminds us all to celebrate the triumph of the human (and canine) spirit. 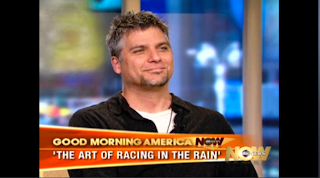 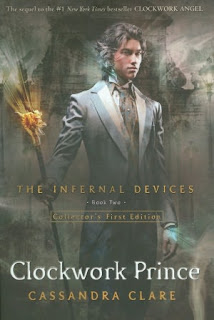 In the magical underworld of Victorian London, Tessa Gray has at last found safety with the Shadowhunters. But that safety proves fleeting when rogue forces in the Clave plot to see her protector, Charlotte, replaced as head of the Institute. If Charlotte loses her position, Tessa will be out on the street and easy prey for the mysterious Magister, who wants to use Tessa's powers for his own dark ends.

With the help of the handsome, self-destructive Will and the fiercely devoted Jem, Tessa discovers that the Magister's war on the Shadowhunters is deeply personal. He blames them for a long-ago tragedy that shattered his life. To unravel the secrets of the past, the trio journeys from mist-shrouded Yorkshire to a manor house that holds untold horrors, from the slums of London to an enchanted ballroom where Tessa discovers that the truth of her parentage is more sinister than she had imagined. When they encounter a clockwork demon bearing a warning for Will, they realize that the Magister himself knows their every move and that one of their own has betrayed them.

Tessa finds her heart drawn more and more to Jem, though her longing for Will, despite his dark moods, continues to unsettle her. But something is changing in Will; the wall he has built around himself is crumbling. Could finding the Magister free Will from his secrets and give Tessa the answers about who she is and what she was born
to do?
Cassandra Clare provides background information about Clockwork Prince.
How cool! Holly Black interviews Cassandra Clare.
************** 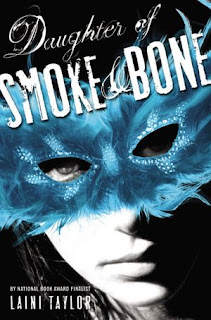 Daughter of Smoke and Bone. By Laini Taylor. Little, Brown, 2011.

About the book:
Around the world, black handprints are appearing on doorways, scorched there by winged strangers who have crept through a slit in the sky.

In a dark and dusty shop, a devil's supply of human teeth grown dangerously low.

And in the tangled lanes of Prague, a young art student is about to be caught up in a brutal otherwordly war.

Meet Karou. She fills her sketchbooks with monsters that may or may not be real; she's prone to disappearing on mysterious "errands"; she speaks many languages--not all of them human; and her bright blue hair actually grows out of her head that color. Who is she? That is the question that haunts her, and she's about to find out.

When one of the strangers--beautiful, haunted Akiva--fixes his fire-colored eyes on her in an alley in Marrakesh, the result is blood and starlight, secrets unveiled, and a star-crossed love whose roots drink deep of a violent past. But will Karou live to regret learning the truth about herself?

Laini Taylor talks about the inspiration for Daughter of Smoke and Bone. 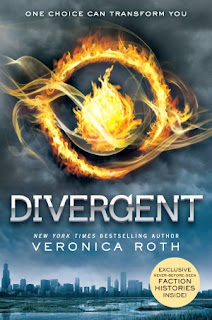 Divergent. By Veronica Roth. Katherine Tegen Books, 2011.
About the book:
One choice can transform you . . . or it can destroy you. But every choice has consequences, and as unrest surges in the factions all around her, Tris Prior must continue trying to save those she loves—and herself—while grappling with haunting questions of grief and forgiveness, identity and loyalty, politics and love.
"My favorite character is Tris, the protagonist." -Veronica Roth. 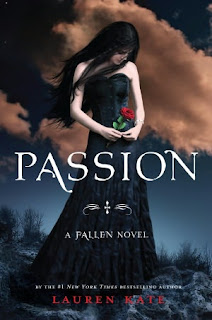 About the book:
Luce would die for Daniel.

And she has. Over and over again. Throughout time, Luce and Daniel have found each other, only to be painfully torn apart: Luce dead, Daniel left broken and alone. But perhaps it doesn’t need to be that way. . . .

Luce is certain that something—or someone—in a past life can help her in her present one. So she begins the most important journey of this lifetime . . . going back eternities to witness firsthand her romances with Daniel . . . and finally unlock the key to making their love last.

Cam and the legions of angels and Outcasts are desperate to catch Luce, but none are as frantic as Daniel. He chases Luce through their shared pasts, terrified of what might happen if she rewrites history. 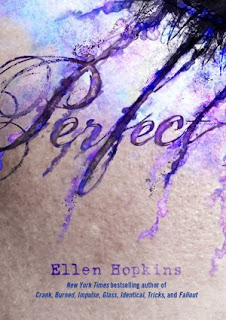 Everyone has something, someone, somewhere else that they’d rather be. For four high-school seniors, their goals of perfection are just as different as the paths they take to get there.

Cara’s parents’ unrealistic expectations have already sent her twin brother Conner spiraling toward suicide. For her, perfect means rejecting their ideals to take a chance on a new kind of love. Kendra covets the perfect face and body—no matter what surgeries and drugs she needs to get there. To score his perfect home run—on the field and off—Sean will sacrifice more than he can ever win back. And Andre realizes that to follow his heart and achieve his perfect performance, he’ll be living a life his ancestors would never have understood.

*******************
I hope your students will vote for their favorite books and authors. I'm working on a Children's Choice Book Awards display and will promote the titles geared toward my audience. Happy reading and voting!
Email Post