The Monarch Award is a K-3 readers' choice book award.

The name Monarch was chosen because of its familiarity to K-3 children and to symbolize the growth, change and freedom that becoming a reader brings. The Monarch is designed to encourage children to read critically and become familiar with children's books, authors and illustrators. The program is open to all K-3 age children in Illinois.

Past winners include Rhyming Dust Bunnies, Scaredy Squirrel, Once Upon a Cool Motorcycle Dude, and If I Built a Car. The 2013 master list was released earlier today. 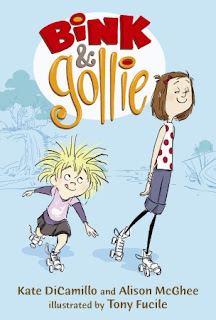 It is only three chapters – three short stories – but over the course of those pages readers will come to love Bink and Gollie. These spunky gals turn even the most mundane tasks, such as sock shopping, into amusing experiences. The book itself mirrors the characters. The refined Gollie would approve of the sophisticated vocabulary and depth of emotion on display. Boisterous Bink would give a hearty thumbs-up to the subtle rule-breaking of the format, which is longer than most easy readers, yet more picture book-like in layout. Don't be fooled – although it may appear short, Bink and Gollie's banter keeps even the advanced reader engaged and entertained. Tony Fucile's expressive illustrations depict a quiet, whimscal world, while providing humor when the story calls for it. Students, children, grandchildren, nieces, mail carriers, and, most importantly, YOU, need to read Bink & Gollie – our top title of 2010.

Tony Fucile reads an excerpt from Bink and Gollie. 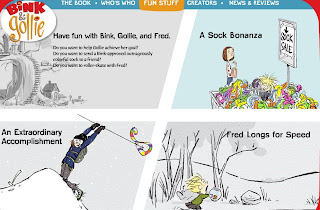 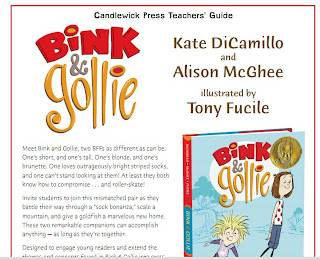 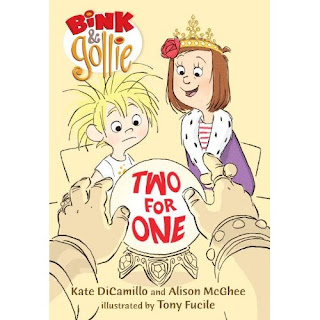 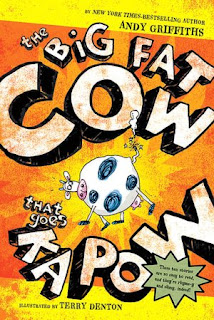 With a mouse and his house,

And a mole in a hole,

And a bike with a spike, 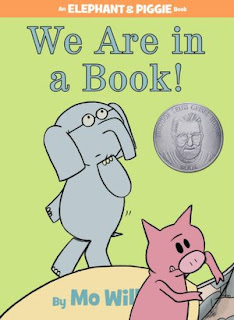 Gerald is careful. Piggie is not. Piggie cannot help smiling. Gerald can.

Gerald and Piggie are best friends.

In We Are in a Book! Gerald and Piggie discover the joy of being read. But what will happen when the book ends?

Mo makes sure all of his characters are simple enough for children to draw.

Like most kids, Frankie Pickle hates cleaning his room. But what happens when his mom says he never has to clean it again? For Frankie and his unstoppable imagination, it means he and his sidekick, Argyle, can become explorers swinging on vines, forging paths through piles of clothes, and scooting past lava pits. They can perform flawless surgery on a broken action figure. They can spend time in the big house. They can even become superheroes. But when junk piles grow too high, will all this imagining be enough to conquer . . . the closet of DOOM?

Eric demonstrates how to draw Frankie Pickle and Arygle.

Eric spent a summer as a caricature artist. 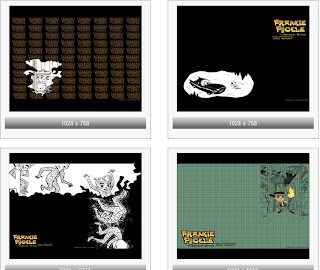 Promote Frankie Pickle with wallpapers for your desktop.

I took Frankie Pickle and Argyle on a road trip. Lulu and the Brontosaurus by Judith Viorst, illustrations by Lane Smith [Simon and Schuster | 2010]

It's Lulu's birthday and she's decided she'd like a pet brontosaurus as a present. When Lulu's parents tell her that's not possible, Lulu gets very upset. She does not like it when things don't go her way. So she takes matters into her own hands and storms off into the forest to find herself a new pet, all the way singing: I'm gonna, I'm gonna, I'm gonna, gonna, get
a bronto-bronto-bronto-bronto-saurus for a pet! In the forest Lulu encounters a number of animals; a snake, a tiger, a bear, all of whom don't particularly impress her. And then she finds him...a beautiful, long-necked, gentle, graceful brontosaurus. And he completely agrees with Lulu that having a pet would be a wonderful thing, indeed! Lulu thinks she's gotten her birthday wish at last. Until she realizes that Mr. Brontosaurus thinks that she would make an ideal pet for him! How will Lulu ever get out of this sticky situation without throwing a fit (Mr. B does not respond well to those), or using force (Mr. B is much to tall to bonk on the head with her suitcase), or smushing her pickle sandwich?

Judith Viorst talks about the importance of libraries. 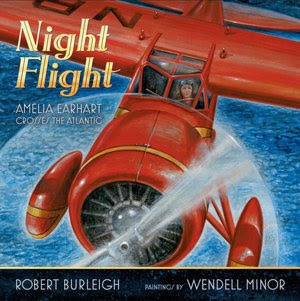 Award-winning author Robert Burleigh has captured Amelia Earhart's first solo flight across the Atlantic in 1932. She was only the second person to do this – and the first woman. Rich in detail, feeling and incident this is nonfiction with edge and action, a you-are-there experience made more dramatic and real by Wendell Minor's vivid paintings. 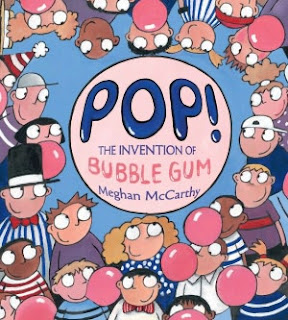 Pop! The Invention of Bubble Gum by Meghan McCarthy [Simon and Schuster | 2010]

Gum. It’s been around for centuries—from the ancient Greeks to the American Indians, everyone’s chewed it. But the best kind of gum—bubble gum!—wasn’t invented until 1928, when an enterprising young accountant at Fleer Gum and Candy used his spare time to experiment with different recipes. Bubble-blowing kids everywhere will be delighted with Megan McCarthy’s entertaining pictures and engaging fun facts as they learn the history behind the pink perfection of Dubble Bubble. 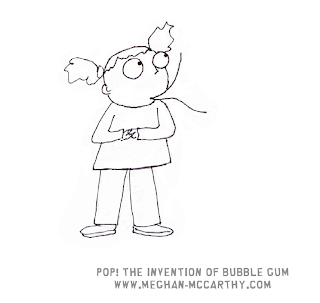 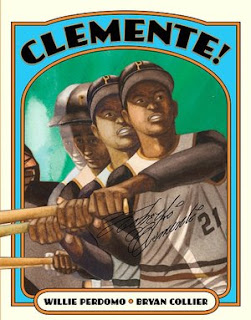 Born in Puerto Rico, Roberto Clemente was the first Latin American player to be inducted into the Baseball Hall of Fame, and the only player for whom the five-year initiation period was waived. Known not only for his exceptional baseball skills but also for his extensive charity work in Latin America, Clemente was well-loved during his eighteen years playing for the Pittsburgh Pirates. He died in a plane crash while bringing aid supplies to earthquake victims in Nicaragua. 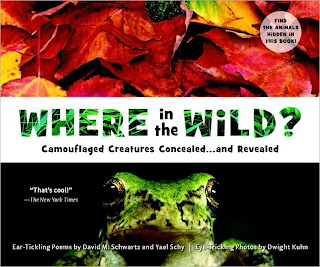 Ten creatures await, camouflaged in artful, full-page photographs, while playful poems offer clues about each animal's identity and whereabouts. Think you've spotted one? Lift one of ten gatefolds to find out. A full page of fascinating information accompanies each animal so readers can learn how nature's camouflage serves hunter and hunted alike. Why do fawns have spots during their first year of life? How did killdeer birds get their name? What makes a crab spider so good at ambushing its prey? 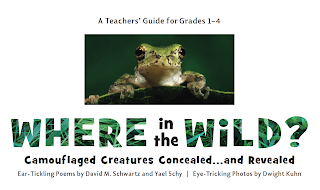 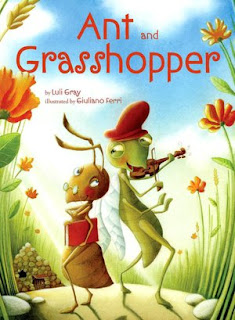 Ant and Grasshopper by Luli Gray, illustrated by Ferri Giuliano [Simon and Schuster | 2011]

Listen to an interview with Luli Gray. She did not like Aesop's version of The Ant and the Grasshopper.
Description:

When Ant spies a carefree Grasshopper playing a fiddle outside on the lawn, Ant immediately harrumphs at the insect's foolishness and continues to go about his very serious business of gathering and counting his food for the winter. But Ant finds Grasshopper's music and whimsy more catchy than he'd like, and soon he's distracted by his own rhyming and doodling! When the harsh winter hits and Ant finds Grasshopper cold and hungry in the snow, he can't help but bring him inside. Only after opening his home to Grasshopper does Ant realize that music, dancing, and laughter have their place in his life, too. 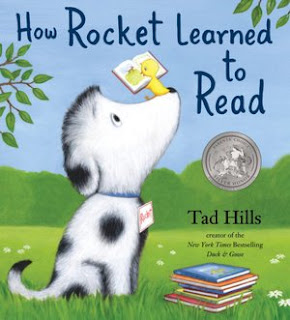 How Rocket Learned to Read by Tad Hills [Random House | 2010]

Learn to read with this New York Times-bestselling picture book, starring an irresistible dog named Rocket and his teacher, a little yellow bird. Follow along as Rocket masters the alphabet, sounds out words, and finally . . . learns to read all on his own! Rocket has one of the BEST iPad storybook apps. 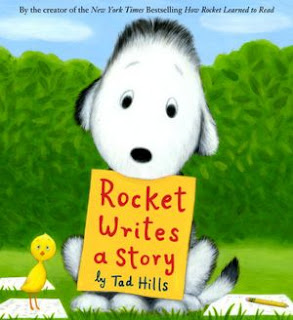 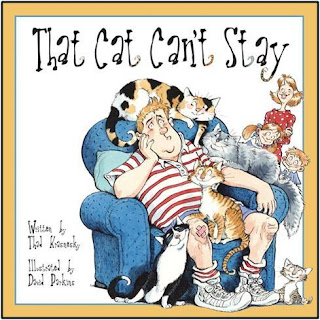 That Cat Can't Stay by Thad Krasnesky, illustrated by David Parkins
Description:
Cats. You either love 'em or hate 'em. But what happens when Mom loves cats and Dad detests them?