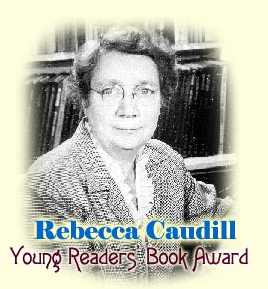 Schools and libraries in Illinois promote the Rebecca Caudill Young Readers' Book Award. It is a children's choice program for readers in grades four through eight. The 2013 Rebecca Caudill master list was unveiled on Monday.
The purposes of the Rebecca Caudill Young Readers' Book Award are
To encourage children and young adults to read for personal satisfaction.
To develop a statewide awareness of outstanding literature for children and young people and to promote a desire for literacy.
To encourage cooperation among Illinois agencies providing educational and library service to young people. (http://www.rcyrba.org/) 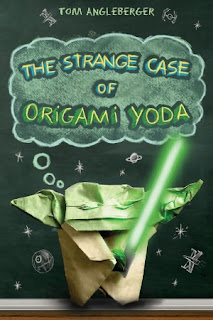 The Strange Case of Origami Yoda by Tom Angleberger [Amulet | 2010]
Travis Jonker and I named Origami Yoda a top children's book of 2010.
Few 2010 releases made as memorable a first impression as The Strange Case of Origami Yoda. The cover, featuring the iconic Star Wars character in paper form, brandishing his lightsaber is the definition of shelf appeal. But what makes this book truly stand out as one of the year's best is its uniquely authentic portrayal of the humor, awkwardness, and first crushes of 6th grade life. –Travis Jonker 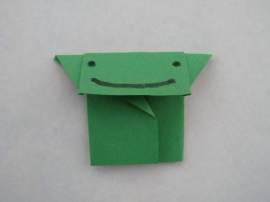 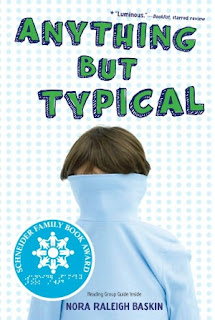 Anything but Typical by Nora Raleigh Baskin [Simon and Schuster | 2009]
About the book:
Jason Blake is anything but typical. He tells his story in his own language, that of an autistic twelve-year-old boy. He is intelligent and sensitive, with many special gifts, and he is different. We learn of his sensitivity and "differentness" as he writes about his life and describes his world. Through his writing, which he posts on a writing website, he meets another young writer, Rebecca, who responds to the post of his story. Jason is intrigued with this girl in his life and fantasizes about her being his girlfriend. Jason's challenges in school, socially, and at home all portray his difficulty in navigating normal life situations. Complicating his life is his desire to have a girlfriend, and his fear of meeting Rebecca and of her rejection becomes almost too much for Jason. By facing his fear and meeting Rebecca, he is able to grow and ultimately accept himself.
*************************** 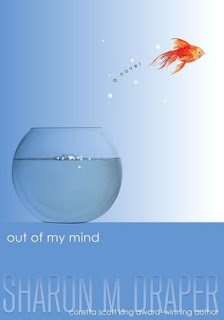 Out of My Mind by Sharon Draper [Atheneum | 2010]
Travis Jonker and I named Out of My Mind a best book of 2010.
Out of my Mind gives a voice to those who otherwise lack one. Sharon Draper highlights Melody's struggle and allows the reader to focus on her abilities, rather than her disabilities. You Â cannot help but pause and consider how you have unintentionally treated those who may face a similar struggle. Out of My Mind is difficult to get out of your mind. It changes the way you think about those differently-abled. 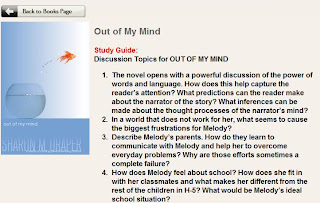 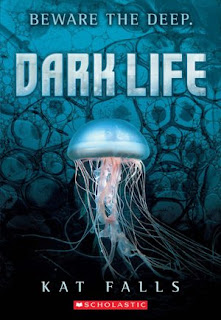 Ty has lived his whole life on the ocean floor, helping farm his family's sub–sea homestead. But when outlaws' attacks threaten to destroy the underwater territory, Ty finds himself in a fight to stop the outlaws and save the only home he has ever known.

Joined by a girl from the Topside who has come sub–sea to look for her prospector brother, Ty ventures into the frontier's rough underworld and begins to discover some dark secrets to Dark Life.

As Ty gets closer to the truth, he discovers that the outlaws may not be the bloodthirsty criminals the government has portrayed them as. And that the government abandoning the territory might be the best thing for everyone, especially for someone like Ty, someone with a Dark Gift. 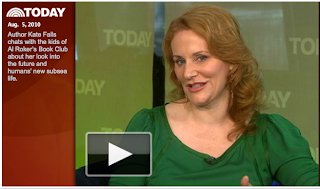 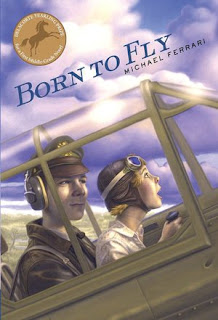 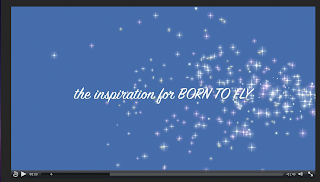 About the book:
Ever since she can remember, Bird has loved flying in small propeller airplanes with her mechanic dad. When the local airstrip is turned into a military flight school, Bird is in heaven—and she manages to turn one young airman's interest in her older sister into some personal flight lessons. Then a young Japanese American student named Kenji Fujita joins Bird's class, and the entire school seems to be convinced that he's a spy, a secret agent, or at the very least, that he and his uncle want the Japs to win. But through a class project, Bird and Kenji befriend each other and accidentally discover real spy activity in the area. So begins an adventure that will shake the town and may even change the future of the United States.
*************************** 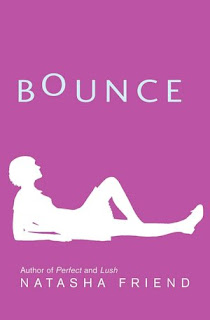 Bounce by Natasha Friend [Scholastic | 2007]
About the book:
Evyn's had enough problems in her life, starting with her mother's death when she was young. But now her father's thrown a whole new batch her way. Not only is he marrying a woman Evyn hardly knows, but he's uprooting Evyn and her brother to go live with this woman and her children. It's a lot of adjustment to make at once. And, quite frankly, Evyn has no desire to adjust. She wants her old life, her old friends, and her old house. She knows she's supposed to bounce along with the changes, but what happens if she doesn't? 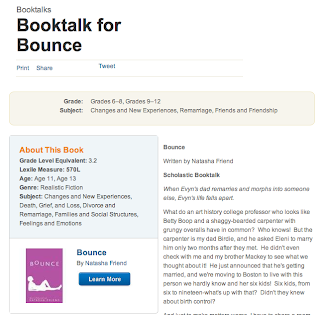 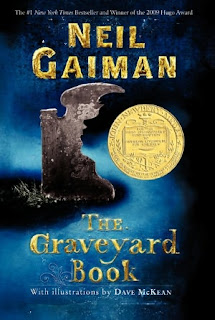 The Graveyard Book by Neil Gaiman [HaperCollins | 2008]
About the book:

Nobody Owens, known to his friends as Bod, is a normal boy.

He would be completely normal if he didn't live in a sprawling graveyard, being raised and educated by ghosts, with a solitary guardian who belongs to neither the world of the living nor of the dead.

There are dangers and adventures in the graveyard for a boy-an ancient Indigo Man beneath the hill, a gateway to a desert leading to an abandoned city of ghouls, the strange and terrible menace of the Sleer. 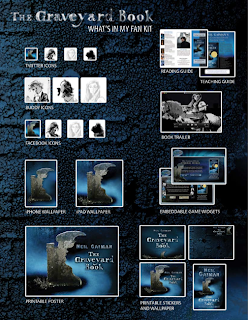 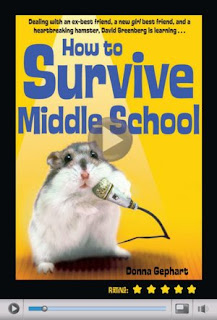 How to Survive Middle School by Donna Gephart [Delacorte | 2010]
About the book:
Eleven-year-old David Greenberg dreams of becoming a TV superstar like his idol, Jon Stewart. But in real life, David is just another kid terrified of starting his first year at Harman Middle School. With a wacky sense of humor and hilarious Top 6½ Lists, David spends his free time making TalkTime videos, which he posts on YouTube. But when David and his best friend have a fight, David is lucky enough to make a pretty cool new friend, Sophie—who just (gulp) happens to be a girl. Sophie thinks David's videos are hilarious, and she starts sending out the links to everyone she knows. Sophie's friends tell their friends, and before David knows it, thousands of people are viewing his videos—including some of the last people he would have expected.
************************ 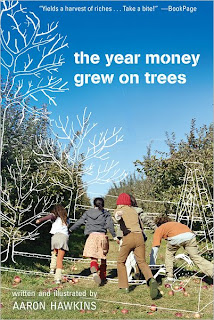 The Year Money Grew on Trees by Aaron Hawkins [Houhgton Mifflin | 2010]
About the book:
With frostbitten fingers, sleepless nights and sore muscles, 14-year-old Jackson Jones and his posse of cousins discover the lost art of winging it when they take over an orchard of 300 wild apple trees. They know nothing about pruning or irrigation or pest control, but figure it out they must—if they are to avoid losing $8,000 (because of an unfair contract).

Aaron Hawkins compiled a helpful guide that explores the book's themes and provides additional information about the time period and references.
************************* 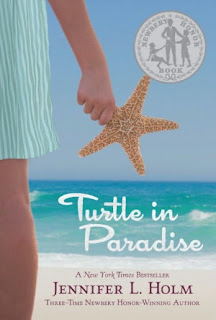 Turtle in Paradise by Jennifer Holm [Random House | 2010]
About the book:
Life isn't like the movies and 11-year-old Turtle is no Shirley Temple. She's smart and tough and has seen enough of the world not to expect a Hollywood ending. After all, it's 1935 and money and sometimes even dreams are scarce. So when Turtle's mother gets a job housekeeping for a lady who doesn't like kids, Turtle says goodbye and heads off to Florida to live with relatives. Florida's like nothing Turtle's ever seen before though. It's full of rag tag boy cousins, family secrets to unravel . . . and even a little bit of fun. Before she knows what's happened, Turtle finds herself coming out of her shell and as she does, her world opens up in the most unexpected ways. Inspired by family stories, three-time Newbery Honor winner Jennifer L. Holm blends family lore with America's past, in this charming, gem of a novel rich in history, humor, and the unique flavors of Key West.

Turtle in Paradise is included in an educators guide about the Great Depression.
"I'm always interested in what's unsaid in a family." -Jennifer Holm 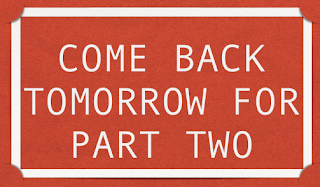