Jeanette Winter's latest treasure, Kali's Song, celebrates the power of music and art. I read it to two first-grade classes and encouraged a handful of third- and fourth-grade students to check it out. Watch the following video to hear their thoughts about this well-illustrated book that belongs in every elementary school library collection.

I am honored to welcome award-winning author/illustrator Jeanette Winter to Watch. Connect. Read. She graciously agreed to an interview about Kali's Song. Thank you, Jeanette!

What planted the seed for Kali's Song?

Jeanette Winter: I saw a concert by the folksinger Buffy St. Marie, at which she played a mouth bow, and talked about how music was first made from a weapon, thousands of years ago. I found a cave drawing from France that depicted a man (perhaps a shaman), playing a mouth bow, surrounded on all sides by animals. The cave drawing was the seed for KALI'S SONG.

The text and illustrations work together beautifully to tell a story that will stay with readers for many years. What came first: the text or the illustrations?

Jeanette Winter: A rough picture, or 2 or 3, came first. I wanted to 'see' the setting of the story.

Then came a rough draft of the text. Then a small dummy of the book, all the while changing the text and pictures back and forth until they worked together.

I'm working on a book now where the text came first, but sometimes all the pictures are finished before I write the text. Each book is different. 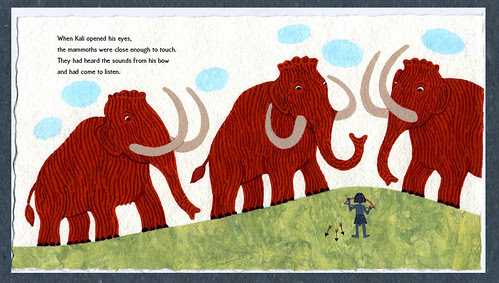 Your mixed-media illustrations are intriguing and highly creative. How do you decide on the media for each picture book?

Usually I use acrylic paint and pens on Arches paper. But some years ago I began collecting handmade paper, mostly from Mexico, for an unknown project sometime in the future. When I decided to write KALI'S SONG, I knew that this was the perfect story for my handmade paper. I felt the rough surface of the paper would be just right for a story about ancient times. Perhaps the surface of the cave walls made me think of this. 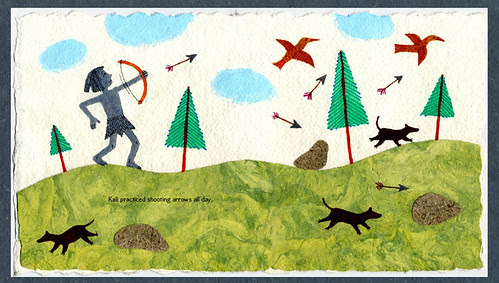 It is fascinating to take a peek inside an artist's space. If I were to visit your studio, what would I see?

I've had so many different studio spaces, that I'll make a list of all the places I've worked.

My first 'studio' was a very small corner in the kitchen. Then a spare bedroom, followed by a converted garage, and on to a larger bedroom. These were all in Texas.

Then in Maine, a studio I designed that looked out onto a meadow, where I regularly saw foxes and deer. And kept myself warm with a wood stove. I also made wood carvings in this studio.

After Maine, back to the Texas Hill Country, another house in the country, and a studio that was the entire 2nd floor of the house, with views all around of the beautiful hills.

Now I live in New York City, in a small apartment, and my 'studio' is part of the living room. I look out at the city from my drawing table, and on a clear day can even see the Empire State Building in the distance.

I've come full circle--starting in a small space, moving to ever larger spaces, and now back to a small space again.

And I've come to realize that the actual space isn't what's important. It's what I'm working on that matters.

*Note: The illustrations are linked to Schwartz & Wade's Flickr page. 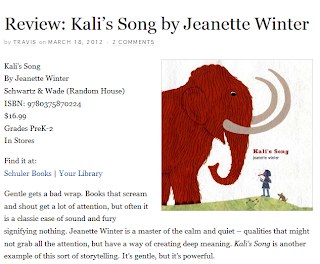 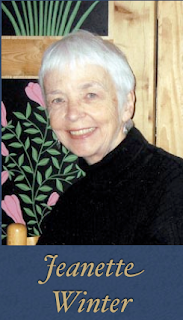 Jeanette Winter has written and illustrated almost 50 books for children, including Diego,Emily Dickinson’s Letters to the World, The Librarian of Basra, Georgia, and Mama. Her art with flat colors and perspectives in the folk art tradition have brought her many honors. She lives in New York City. -Bio taken from here

* If you win Kali's Song, I will send you an email.

* You must be at least 13 to participate.