The following information is taken directly from Random House's press release. What a brilliant project! Thank you, RJ and Random House!
Random House Children’s Books launches Choose Kind (ChooseKind.tumblr.com), a campaign to encourage students, educators, families, and readers of all ages to combat the nationwide rise in bullying with every day acts of kindness, it was announced today by Chip Gibson, President and Publisher. The initiative was inspired by WONDER (Alfred A. Knopf Books for Young Readers), the debut novel by R. J. Palacio, which tells the story of Auggie, a fifth grader with a facial deformity who attends a mainstream school for the first time.
“WONDER has inspired us, and captured our hearts entirely,” said Gibson. “The outpouring of enthusiasm from book lovers and educators moved us to share the poignant message of this novel with a wider audience. I am proud to give them, and anyone around the world, the opportunity to discover the story and to pledge with us to Choose Kind.”
ChooseKind.tumblr.com is the online home of the campaign, designed as a next step for the ardent supporters of the novel who have been asking for additional resources to use in sharing WONDER and its message with families, schools, and communities across the country. Each section of the site offers an interactive user experience.
Additionally, the campaign will have a global footprint with full support from Random House UK, which will publish WONDER for adult readers on June 6th, 2012, following its release as a children’s novel in March.
“Celebrating those who have made the choice to be kind—not always an easy thing to do when you’re a kid!—is the best way to raise awareness to this very simple fact: kindness is a virtue whose ripple effects can literally change the world,” says WONDER author R. J. Palacio. “One child at a time, one person at a time, there’s no greater antidote to bullying than the steadfast refusal of children, teachers, and parents to accept a culture where bullying is tolerated.”
WONDER, a New York Times bestseller, was an instant hit with readers of all ages, garnering praise from Entertainment Weekly, The New York Times, and NPR’s Morning Edition, among others. Number one New York Times bestselling author Nicholas Sparks raved, “WONDER touches the heart in the most life-affirming, unexpected ways, delivering in August Pullman a character whom readers will remember forever. Do yourself a favor and read this book—your life will be better for it.”
A word-of-mouth sensation from the start, with its Twitter hashtag, #thewonderofwonder, the book has also been the topic of countless blog posts from parents, teachers, and librarians praising its ability to relay a universal message from the story of one unique boy. Clara Beatty, a nine-year-old girl with Treacher-Collins Syndrome, was already reading WONDER when the Associated Press spoke with her and her family for a recent feature. Her parents Janet and Eric were impressed with Palacio’s skill in realistically portraying Auggie’s experience, noting “As a family with a child of facial difference, WONDER gives an amazingly accurate view of our world from a number of perspectives. We are hopeful that this story raises awareness of how being kind can be powerful.” 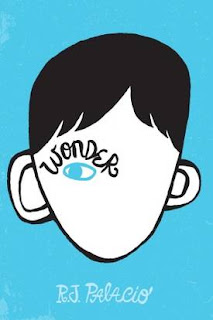