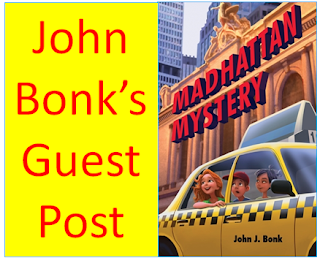 Thanks, Mr. Schu, for the opportunity to do a guest post on your blog!

My middle-grade novel, Madhattan Mystery, which launched on May 22nd, revolves around a small town girl, Lexi McGill, and her little brother, Kevin, visiting their wacky actress aunt in New York City while they attend City Camp for the summer. That’s the plan anyway. They barely arrive at Grand Central Station when Lexi overhears a conversation in the Whispering Gallery between two mysterious men—something about stolen jewels. When headline news starts popping up that Cleopatra’s jewels disappeared en route to the Metropolitan Museum of Art, the siblings team up with Aunt Roz’s teen neighbor, Kim Ling Levine, a pushy investigative journalist wanna-be, who leads them on a zany, death-defying hunt for the jewels through the core of the Big Apple.

I was really excited to create my own book trailer for Madhattan Mystery but with zero budget, I couldn’t exactly go high tech. I’d have to use what was already at my fingertips: a camera, my imagination, and an old version of Windows Moviemaker.(The newest version wasn’t compatible with my XP operating system.) Since I live in Manhattan, I had tons of fun traipsing around the city, snapping most of the photos myself—but some stuff was impossible to get, like a photo of the abandoned underground train station in Grand Central. The general public isn’t usually allowed down there, but after an online search, I found a great photo by a professional photographer who granted me permission to use it. Whew! Another tough one was the shot of a homeless woman. I happened to mention this to an actress friend of mine and she actually volunteered to sit on a dirty curb, wrapped in a blanket, holding a cup of coins. “A friend in need is a friend indeed.” But when it came to the photo representing Kim Ling, I was really stumped. A street smart Asian-American girl with blue-streaked pigtails and an angry expression that makes your skin crawl? Try Googling that! Luckily, a woman in my writing critique group came to the rescue. Her daughter, Catie, was eager to portray the character in a photo shoot and she knocked it out of the park. I think she wound up being the real star of the trailer. What do you think? 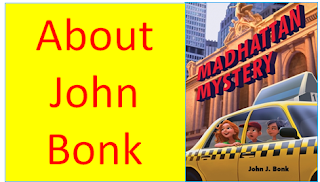 JOHN J. BONK is a former musical comedy performer turned tween writer, who has hung up his tap shoes and devotes his time these days to “performing on the page.” He is the author of the comic middle-grade novel, Dustin Grubbs: One-Man Show, published by Little, Brown & Company, which School Library Journal called “Lighthearted and uproarious!” and Booklist described as having “Great lines, hilarious scenes and a very satisfying ending.” His second book, a sequel entitled, Dustin Grubbs: Take Two! also published by Little, Brown, was described by Children’s Literature as “Hilarious, delightful, a perfect choice–even for the most reluctant readers” and for which Kirkus Reviews declared, “The giggles never stop!” His latest novel is entitled MADhattan Mystery. It centers around a 12-year old girl who overhears a jewel heist plot in New York’s Grand Central Station and is due out in Spring of 2012 for Bloomsbury/Walker Books. -bio taken from here

“A delight in every way.” – Booklist *starred review*

“A pleaser for fans of From the Mixed-Up Files of Mrs. Basil E. Frankweiler.” –Kirkus

“Fueled with intrigue and humor, Bonk has written a story that sucked me in and will appeal to even the most reluctant reader.” – Loving Books blog 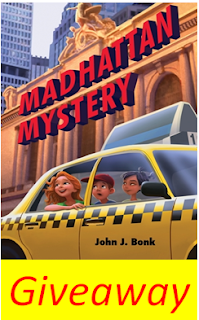 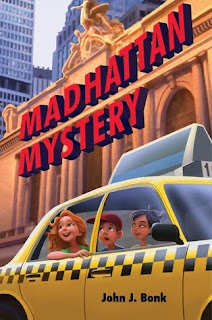