Let me say, first of all, how—ahem—flush with excitement I am, Mr. Schu, to share the visionary promise of my “number two” picture book, Poopendous!, with your readers. Poopendous!, though newly out, is already picking up a raft of rave reviews. I’ve had a parade of appearances, in which Poopendous! was greeted with bottomless enthusiasm. Giggles give way to titters, which give way to guffaws. Will the pooparazzi soon be hot on my tail? Let me don a disguise and proceed with the interview.

Mr. Schu: Thank you for giving us the inside scoop on every type and use of poop. What planted the seed for Poopendous!? 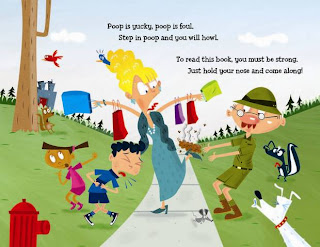 Artie Bennett: I was searching my brain for the perfect follow-up to my first “mature” work, The Butt Book. It was a big hit, but now it was time for a second act. I didn’t want to be a one-trick pony. I wanted a topic that, as with The Butt Book, would have immense appeal and a huge potential for fun. I noodled around with some ideas. I played with poop (figuratively, of course). Hmmm. Maybe. That could be amusing. After all, what more fertile topic could there be but poop. And then one day, out of the blue, the word “poopendous,” unbidden, flashed into my mind. And I knew that I had the title for my next work, as well as its final spread. Perhaps someday we’ll even see the word “poopendous” in the dictionary. Wouldn’t that be a kick!?


Mr. Schu: Did you and illustrator Mike Moran collaborate with each other on the design of the book?

Artie Bennett: With my first book, The Butt Book, I submitted an exhaustive catalog of illustrator suggestions for every verse I composed. Then the sketches arrived and I saw that Mike Lester, The Butt Book’s illustrator, had cheerfully ignored every one of my suggestions. And you know what? I was glad he did! He brought his own genius to the project—and that’s how it should be. So I learned my lesson. I didn’t send suggestions with Poopendous! so that Mike Moran (as you can see, I only use illustrators named Mike; sorry, Marc Brown) would bring his own brilliant artistic vision to the enterprise. I did make a few small suggestions later on for ramping up the humor even more, but the work is a true collaboration. Mike Moran and I have already had three joint appearances and it’s a treat for me when he’s there. We have a fun verse that goes:

Poop from critters is called dung,
And monkey dung is sometimes flung.

Monkeys fling when under stress.
It helps the monkey decompress.

So if a monkey aims at you,
Duck behind a friend, or two!

Now, when Mike Moran and I have shared the stage, I’ve changed “friend” to “illustrator” and hidden behind him. It makes a good sight gag. I heard that Mike Moran was told to channel his inner eight-year-old boy before knuckling down to work. And you can see how much fun he had in his exuberant, side-splitting illustrations. I’m hoping that this is just the beginning of a beautiful (doodiful?) friendship and collaboration.

Mr. Schu: Please share any resources you found useful when you were researching poop.

Artie Bennett: I have an extensive nature library, with field guides to everything under the sun. I even have a great guide to animal tracks and scat, which proved inspirational. I knew a lot about poop from natural history exploration, a lifelong hobby of mine. But I still had to conduct a fact-finding mission before writing Poopendous! I began recording the many, many remarkable things about poop (things that I knew and things that I just gleaned) in my notebook before I ever attempted to shape the information into verse. The Internet proved invaluable. For example, one of my favorite verses is the incantatory

I wasn’t aware, I have to admit, that wombats, alone in the animal kingdom, produce cube-shaped poop, described as resembling rather pungent dice. But when I serendipitously stumbled upon this titillating tidbit, I rejoiced, for I could now complete my couplet!
I also learned via the Web that Mongol herdsmen use yak poop to winterize their yurts. And I put this newsworthy nugget to good use:

The Mongol yurt, a native shack,
Is often sealed with dung of yak.


Mr. Schu: I predict my students will laugh out loud when I share Poopendous! in the fall. How are readers responding to Poopendous!?

Artie Bennett: They’re laughing out loud! The response has been overwhelming. But there’s more to Poopendous!, though, than belly laughs. It’s packed with information, making it highly educational to boot. Youngsters learn while having fun. But more importantly, they see how enjoyable a book can be, which can jumpstart a lifelong love of reading. Reluctant readers, in particular, are ripe for the charms of both The Butt Book and Poopendous!

And reviewers have been ebullient in their praise. The Huffington Post, in a recent review, exulted: ”For anyone who loved The Butt Book, you must immediately go and buy Artie Bennett’s follow-up, Poopendous! It appears there is no topic Mr. Bennett can’t make funny and educational.”

The children’s book buyer for Queen Anne’s Books in Washington state sent me this lovely message in response to my sharing news of my book: “Guess what?!? We already have Poopendous!, and I have even been known to give spontaneous in-store readings. What a delightful, hilarious, informative, fascinating book. Thank you for writing to us, and for writing such great books! Best of luck to you, and hip-poop-hooray!”

The Children’s and Teens’ Book Connection weighed in with “If Dr. Seuss decided to write about bodily functions, he probably would have come up with something as zany as Poopendous! Kids will be on the floor laughing, not realizing they are learning a bunch of neat information. Do you want your kids to be eager to read? I bet this book will help. Highly recommended!”

It delights me to know that my silly but wholesome books are playing their part in introducing children to the absolute joy of reading.

Mr. Schu: You dedicate Poopendous! to Dr. Seuss. Did you work with him at Random House?
Artie Bennett: Yes, but indirectly. My day job is executive copy editor for Random House Children’s Books. I love what I do and I love where I do it. I can’t think of anything I’d rather do, other than play shortstop for the New York Yankees. But let’s come to our senses. Maybe designated hitter? I’ve been at Random House for nearly twenty-five years. Shortly after I started, I was handed a seven-page manuscript (this was back in BC—before computers) and told to copyedit it. It was Oh, the Places You’ll Go! It was by Dr. Seuss and I was in awe of him. How extraordinary! My idol! My dream job was already proving more than I could’ve hoped for. I couldn’t believe what I had before me. Well, Dr. Seuss didn’t require much work, but I do recall making some suggestions that he accepted. Soon the illustrations arrived, joining the text. And as pass followed pass, the book began to take shape. How thrilling it was to be a party to! Oh, the Places You’ll Go! published in January 1990 and it would be Dr. Seuss’s swan song. He died the following year. I never did get to meet him, but I was so proud to have worked on his last, great work. And I can think of no one more deserving of the dedication. By the way, I dedicate it to “Dr. Seuss, my meuss,” playing on the word “muse.” I think he might have liked that, too.
Mr. Schu: What books influenced you while growing up?

Artie Bennett: One book that leaps readily to mind is A Fish Out of Water, by Helen Palmer, who was married to Dr. Seuss. It’s a cautionary tale of what can happen to a boy who fails to follow instructions. He overfeeds his little fish, Otto, who grows to gargantuan proportions. Otto even outgrows the town pool. The pet store owner is called in. Something must be done. He descends into the pool with a boxful of tools. After some suspenseful moments, he emerges with Otto, restored to normal size, ensconced in a fishbowl. P. D. Eastman’s illustrations are a delight. I’m sure this book taught me that untoward things can befall a boy who doesn’t listen. As a consequence, I was a good boy. And it probably planted the seeds for my own future literary career.

Dr. Seuss wielded an enormous influence on my boyhood. He taught me the singular pleasures of wordplay while giving me an appetite for verse. As a boy, I loved words and the thought of going On Beyond Zebra! was a delicious thrill. After all, don’t dictionaries end at “zebra”? Poopendous! has an early verse

Everyone poops—yes, it’s true.
From aardvarks to the humped zebu.

This verse is both an homage to the classic, pioneering book Everyone Poops and to Dr. Seuss, for “zebu” is on beyond “zebra.” I’m tickled that some young readers have asked me if I made up the word “zebu.”

*Mr. Schu, you should have asked me about . . . where I compose my verses.

Artie Bennett: I swim every weekday morning and I’m at my creative peak when I swim. I come up with some of my best verses while doing my laps. And if I’m stuck on a particular verse, I find solutions while doing the crawl. It’s imperative, though, that I jot them down as soon as I towel off lest they slip back into the pool. Something about the rhythm of swimming seems to facilitate versifying. Perhaps it’s because my mind is a blank slate then, ready to welcome inspiration. The other day, I happened to hear the journalist Lynn Sherr discussing her new book, Swim. She also mentioned how swimming is a source of some of her best ideas. Well, excuse me now, Mr. Schu. It’s time to jump into the pool! Look out below!


Thank you, Artie, for your detailed, insightful, and funny responses.

I am giving away one copy Poopendous!

Please visit Artie Bennett's website to learn more about Poopendous! and The Butt Book. Also, make sure you visit his "Claim to Fame" page.