An Interview with Corey Rosen Schwartz

Colby Sharp, Nerdy Book Club, and I cooked up a special trifecta for you in order to give Corey Rosen Schwartz and Dan Santat's The Three Ninja Pigs a BIG book birthday celebration. 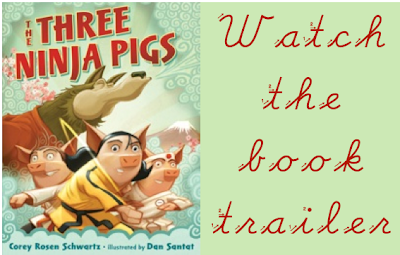 Doesn't this effective book trailer make you want to run to your local independent bookshop and shout, "I NEED A COPY OF THE THREE NINJA PIGS. SERIOUSLY! Where is it?" 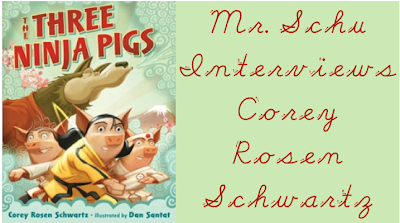 Corey Rosen Schwartz: The three little pigs are fed up with the big bad wolf and all his bullying, so they enroll in Ninja school!

Mr. Schu: It is fascinating to learn the story behind the story. I read that a comment made by your son inspired you to write The Three Ninja Pigs. Can you share that story?

Corey Rosen Schwartz: Sure. My daughter came out of the womb incredibly competent.  My son, who is only 15 months behind her, spends his whole life trying  (mostly unsuccessfully) to keep up with her   One day when they were three and four, we were at a restaurant talking to a waitress whose first language was Spanish.  Jordan said “I can speak a little Spanish.”  The waitress asked Josh if he could speak Spanish too.  Not wanting to appear inferior, he said, “No, but I speak a little karate.”  That was my “Kiya!” moment. 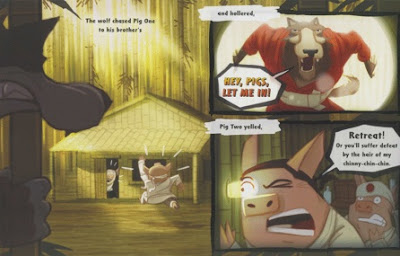 You and Dan Santat are a perfect match. What went through your head when you found out he was illustrating The Three Ninja Pigs?

Oh, this is kind of crazy.  As soon as the manuscript sold, my friend, Tara Lazar, said, “You know who would be the perfect illustrator?  Dan Santat.  You should suggest him to your editor.”   Shortly after that, Dan “friended” me on Facebook.   I was a bit surprised.  I knew him.  He was the illustrator of Chicken Dance!  But I couldn’t figure out how he could possibly know me. I wrote back and said, “Funny that you got in touch, because my friend thinks you’d be the perfect illustrator for my new book, THE THREE NINJA PIGS.”   He wrote back and said, “Yeah, I am doing it.”

What went through my head was... YOU’VE GOT TO BE KIDDING ME!  I honest to God thought he was pulling my leg!  Once I finally realized it was true, I was ecstatic.  And guess what?  There is another Schwartz-Santat project in the works!  :) 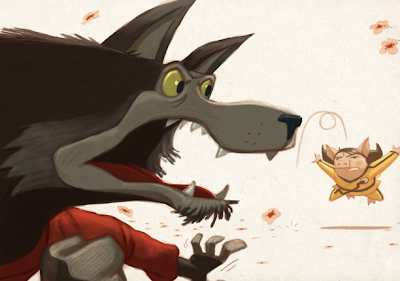 Are you most like Pig One, Pig Two, or Pig Three?

Okay, well...  if you asked my husband, he would no doubt say ‘Pig One.”  He thinks my laziness knows no bounds. (and judging by the piles of laundry around here, he has a point)

BUT I will say this... it takes a lot of dedication and determination to get a picture book published.  So, I think that should at least bump me up to Pig Two! 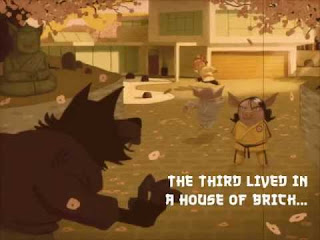 What are four of your favorite fractured fairy tales?

Four?  Don’t you know that with fairy tales everything comes in three’s?

Okay, in no particular order: 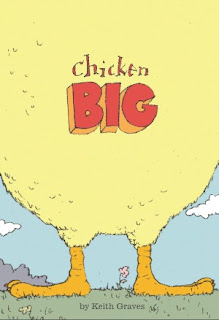 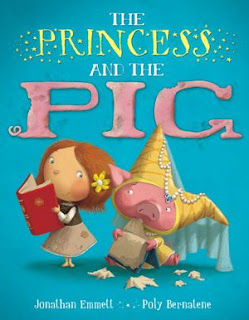 The Princess and the Pig
By Jonathan Emmett, Poly Bernatine (illustrator) 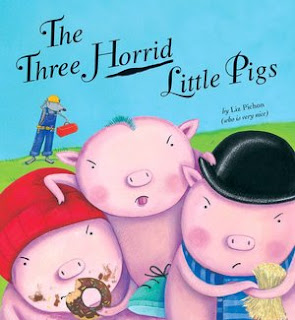 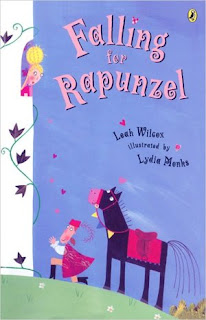 Falling for Rapunzel
By Leah Wilcox 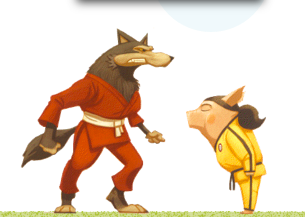 Picture books are something you never outgrow!

Reading is a passport to any place you want to go.  This summer, I was in a Nazi-occupied prison in France, a creepy carrot patch, and a domain with three walls of glass.  Not exactly Club Med, but all were life-changing journeys!

Mr. Schu, you should have asked me about what motivated me to make Pig Three a girl!

When I wrote the first draft, Pig Two was the girl.  I was rather pleased with myself that I had thought to change one of the brothers to a sister, so it would not be an all male cast.  I read the story to Jordan who immediately said, “Mommy, I think Pig Three should be the girl.”  And, I said,
“Done.”   So, there you have it. It definitely pays to have kids if you are going to be a picture book writer. 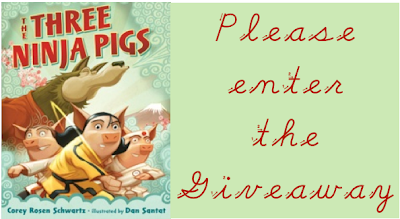 I am giving away a copy of The Three Ninja Pigs.

It is time to travel. Are you ready to read Colby's interview with super-talented illustrator Dan Santat and read Corey's nerdy essay? Happy reading! 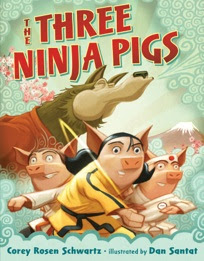