The Ivy and Bean Blog-A-Bration (Week 5)

Thank you for following the Ivy + Bean Blog-A-Bration. I hope the tour has inspired you to read or re-read the Ivy and Bean series. It is difficult not to laugh when you're reading Ivy and Bean's adventures. I'm not up to speed on current shows airing on Disney, ABC Family, and Nickelodeon, so I called on my second graders to help me with this week's post. I asked them to imagine that young actors were auditioning for an upcoming Ivy and Bean movie. (I had to explain multiple times that a movie is not really in pre-production.)
Who should audition for the Ivy and Bean movie?
1. Joey King
2. Jordana Beatty
3. Ashley Boettcher
4. Taylar Hender
Who would you add to this list?

Chronicle has generously agreed to give away a paperback copy of Ivy and Bean: Bound to Be Bad and three sets of Ivy + Bean Mini Notes.
Rules for the Giveaway
1. The giveaway will run from September 12 to 11:59 PM on September 15.
2. You must be at least 13.
3. Please pay it forward.

Coquette Maman
In the Pages
Kid Lit Frenzy
Media Darlings
One Page to the Next
Roundtable Reviews for Kids
Ruth Ayres Writes
Sharpread
The Children’s Book Review
The Family That Reads Together
The O.W.L.
There’s A Book
Van Meter Library Voice 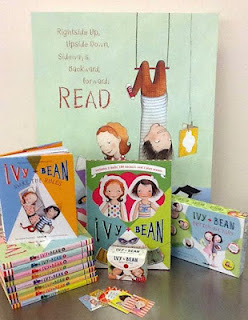