*"That's What Friends are For" was the most popular song.

Head on over to Colby's blog to watch his video.

Patricia MacLachlan talks about her name.

"Everything I write about is from my childhood in one way or another." -Patricia MacLachlan

Patricia MacLachlan spent a lot of time in detention.

A Note from Travis Jonker

For every attempt so far in the Covering the Newbery series, I do the same thing. I enter keywords from the book into a Flickr creative commons search. After I find an image, I sometimes will have to adjust something in Splashup or Photoshop. Otherwise, I just throw the image into PicMonkey, add text, and call it good. I slavishly stick to this system because:
A: It cuts down on time spent.
B: It ensures that a couple weird ones will make it through.
Sometimes things come together really quickly and look alright, but sometimes we have what occurred with today’s book. Nothing seemed appropriate. Cest la vie. But on we go… 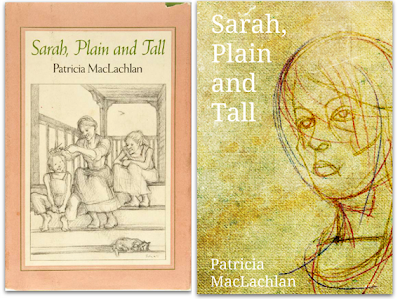