I am lucky that every Friday someone who cares deeply about children's literature finishes my sentences. This week's special guest is author Anne Marie Pace. We chatted about her Vampirina books, reading, writing, and school visits. I wrote the words in red, and she wrote the words in black. Thank you, Anne Marie! 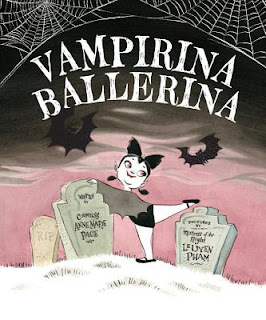 Vampirina wants to make sure her friends don’t make the same mistakes she does.  Both books are written in second person, as how-to books. She’s a little bit bossy, but it’s because she came upon her knowledge the hard way and she wants to protect others from similar gaffes. In Vampirina Ballerina, of course, she becomes a ballet dancer, so she tells her story of finding the right class, dealing with the obstacles she encounters, and the eventual triumph of participating in her first dance recital. In the sequel, Vampirina Ballerina Hosts a Sleepover, Vampirina is anxious to invite her new dancing friends to her home for a party. After visiting a friend’s more typical house, she worries that the girls will find her home creepy and strange.  In the end, she finds that true friends celebrate and enjoy their differences.
LeUyen Pham’s illustrations are so full of detail that I find new things every time I study them.  Among the many details I love in the first book, I particularly enjoy what she did with Vampirina’s admiration of Dame Margot Fonteyn.  Vampirina has a poster of Margot Fonteyn on her bedroom wall, and it inspires her throughout the book, especially she feels at her lowest. To younger readers, I always point out Vampirina’s arabesque in the end papers, which is a reenactment of the Fonteyn poster. A careful older observer might notice the lettering on the tombstones outside the castle; I don’t mention that to younger readers but I enjoy the fact that it’s there.  In the second book, I’m fond of the way Vampirina hides the creepy parts of her family’s home with hearts and rainbows and flowers.  I particularly love how she transforms her pet bat. 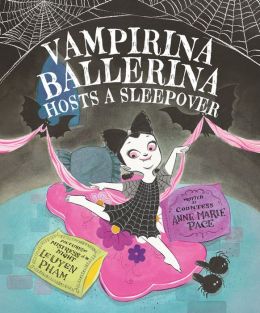 The companion book to Vampirina Ballerina… starts where the first book leaves off. When Disney-Hyperion asked for a sequel, I brainstormed a long list of possible premises, but the sleepover made the most sense to both me and LeUyen, as a follow-up to the first book.  Vampirina has made a lovely group of friends; of course, her next step would be to interact with them outside of ballet class. 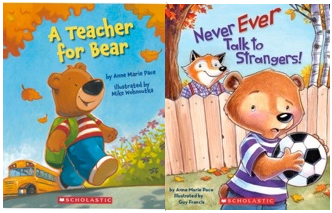 Never Ever Talk to Strangers and A Teacher for Bear are two original paperbacks I wrote for Scholastic Book Clubs, now called Scholastic Reading Clubs.  Strangers is about a bear who encounters a new neighbor and tries to remember all the safety rules he learned from a police officer at school.  It’s a very gentle introduction to Stranger Safety for the youngest kids.  Parents have written me saying that they reread the book before going to a crowded place like a mall or county fair, to remind their kids of what to do in an uncomfortable situation.  Stranger Safety is a far more complex issue than I could present in one short book for young children, but I like knowing I’ve given parents a way to begin the conversation. A Teacher for Bear is about a little bear just beginning school.  He feels comfortable because his older sister Bella has told him what to expect, but once he arrives, everything turns topsy-turvy when he discovers he has a different teacher than Bella had.
Whenever I visit a school or a library I wear pajamas. Well, that’s not exactly true, because when I go to the public library to get books for myself, I do wear regular clothes.  But Vampirina Ballerina Hosts a Sleepover lends itself very nicely to a pajama party theme, so I’ve been quite comfortable this summer during book events.  I have two pairs--one pink flowered, one pink polka dots.  I also have a pink sleep mask with googly eyes.  I suppose I should also answer more seriously.  Whenever I visit a school or library, I feel energized by the kids. Visiting schools reminds me very clearly why I’m writing books. 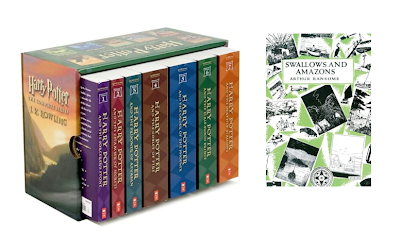 Reading is something I just can never have enough time for. My mom says my first sentence was “Please read,” and my sister says I never wanted to play with her because I was always reading. These days, my schedule is pretty packed, but I have a huge pile of books on my bedside table. This summer, among others, I reread two favorite series: Harry Potter and the Swallows and Amazons books by Arthur Ransome.  I’m glad to say my kids are readers, too.  I never say no when they want me to buy them a book.

Picture books are not what I intended to write, but now that I’ve started, I will never stop writing them.  I began my writing career assuming I would write middle-grade novels, but somewhere along the line, I was tempted to try my hand at picture books and I fell in love.  I do have several middle-grade novels in progress and I hope they’ll someday be published, but I adore the relationship between art and text that one finds in the best picture books, and I love the wide-eyed adoration that kids have for their favorite books.  I need to be a part of that, however I can. 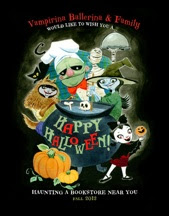 Mr. Schu, you should have asked me what giveaways LeUyen Pham and I have planned this fall for Vampirina readers!  There are actually THREE—two aimed at children and one aimed at teachers/librarians.

The details are on my website, but in short, for the teacher/librarian prize, we are creating an annotated copy of the book for a teacher or librarian to use with kids.  From my own teaching days, from my school visits and in my writing workshops, I’ve learned that revision is one of the hardest parts of the writing process for kids.  So LeUyen and I are going to mark up a book with notes, post-its, parts of early manuscripts, sketches, etc., to be used as a teaching tool.

For the kids, we are doing two Halloween giveaways, one pre- and one post-holiday.  Last year we received any number of photographs of children dressed as Vampirina last Halloween, so for three lucky winners, we’re going to make costume preparation easy, with a giveaway of Vampirina’s skull headband and a Scholastic Reading Clubs edition of Vampirina Ballerina.  And one of those winners will also receive a signed hardcover copy of Vampirina Ballerina Hosts a Sleepover and various other Vampirina swag.  The second contest will be in October/early November.  The first twenty people who send us a photograph of themselves dressed as Vampirina for the holiday will receive a poster designed by LeUyen featuring Vampirina’s family in their own Halloween costumes.

I hope your readers are some of the winners.  Thanks so much, Mr. Schu!! 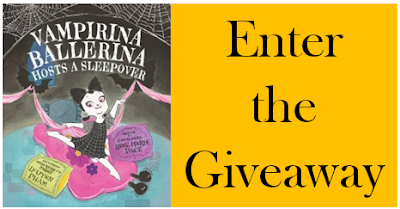 I am giving away a copy of Vampirina Ballerina Hosts a Sleepover.