I am deeply, deeply honored that Caldecott Honor-winning illustrator Anita Lobel visited Watch. Connect. Read. to finish my sentences. I remember reading and loving On Market Street when I was in kindergarten. I'm pretty sure my kindergarten teacher read it to me. 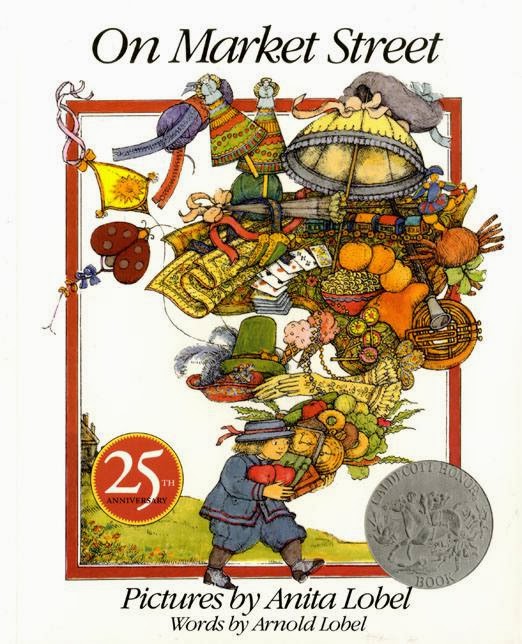 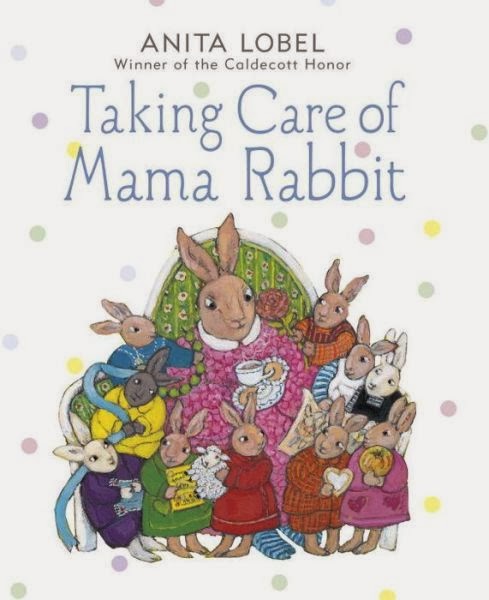 Taking Care of Mama Rabbit tells the story of another incident in the life of the Rabbit family introduced in TEN HUNGRY RABBITS. I grew fond of the rotund rabbit family and their correct and polite way of being with each other.

Actually, TAKING CARE OF MAMA RABBIT began with a picture in my mind, of a rabbit's head poking out of a top hat.

Aha, I thought. This is a chance to spin a theatrical tale. Let's say the rabbits decide to concoct a show for Mama and Papa, in order to postpone bedtime.

The thought of bed led to a vision of one or both parents sick in bed. That is when I decided to let Mama be the ailing one, to dispatch the rather authoritarian Papa in search of medicine, and leave the little rabbits in charge.

It was then, I thought, that putting on a show for an ailing Mama Rabbit might be more irritating than comforting. I found a gentler more logical way to put the rabbits to work.

One by one, the ten rabbits, prepare and find things to eat, things to adorn herself with and be entertained by.

By the end of the parade of pictures, all the offerings have accumulated around Mama, who has gradually risen more and more from under the bedclothes.

Mama is obviously livelier. The rabbits pull top hats out of a sack. Papa returns with medicine that is not needed anymore.

There is no longer any reason not to suggest some kind of "Rabbit" entertainment.

I finally was able to arrive at the finale, which kicked of the original idea for "TAKING CARE OF MAMA RABBIT".

[On the end right page, we find out why Mama was not feeling quite right in the first place.] 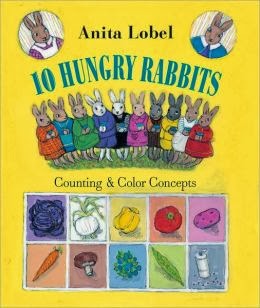 The illustrations for Taking Care of Mama Rabbit and 10 Hungry Rabbits...

...Both are concept books about accumulation. The results of which are something good.

In Ten Hungry Rabbits, the efforts of parents and children results in the sharing of a fine meal.
Sharing a meal is an ideal. It is always something to be wished for in real life family meals, whether every day or special occasion are often something to be tolerated and survived.

In picture books a group sitting down with lovely dishes in a nice setting is a great indulgence for the picture book creator.

So is a parade of bringing gifts to someone to make them feel better than they felt before..

I love concept books, both containing counting and  alphabets. I have done quite a few over the years, rather elaborate and complicated ones extending over 40 or 48 pages.

My editor at Knopf suggested that I do something simpler in the 24 page format she had had considerable success with. I liked the idea.
The format lent itself to a simple beginners book of counting from 1 to 10.

I wanted to add another layer to the counting. I added the colors. Then I decided that the colors ought to be attached to something, so I added colorful vegetables.

So it became a little book  with gathering good things to eat, on pages with elegant graphic numbers in the color of the depicted vegetables and a variety of verbs describing the search.

After the initial family group with wistful mother and her empty soup pot, and rather exacting father, giving orders, the Vegetables and numbers in colors are graphically, quite soberly depicted on ten pages. The individually gathered vegetables culminate in a theatrical cornucopia the rabbit group offers to family kitchen and table.

Mama observes how "nice" their  rabbits are. Papa prefers praising them for being "strong". The pictures of the cornucopia, and faces the parents beaming, are followed by a picture of Papa, in apron!, chopping vegetables, then Mama stirring her pot brimming with promise.

Behind Papa, the Rabbits, at first, line up politely with soup bowls in their paws. In the picture behind Mama, they crowd seemingly more impatient around the stove.

In a little book, if it is to have a double page spread, I reserve it for a climactic, moment.
In this case the happy, satisfied family gathering around a lovely dinner table in a traditional dining room.

In the design of my books, simple as well as more complex, I always think of the pictures and text, as I might of staging a little piece of theatre. Or even simple pieces of music. The headlong rushes of "crowded" noise or a contemplative pause are there. They are the important underpinnings of the shape and rhythm of a picture book.

My studio is a space in one corner of my loft apartment in Soho, New York. It has an ample, but never ample enough, drawing table, with two good work lamps. Often the picture that is worked on at the moment is nudged by brushes, pencils, tubes of paint, reference materials, notes scribbled to remind me of something, a telephone….

The living room couch serves as a place to sit and contemplate the work which spills over from the drawing table.

The large dining room table is sometimes that. But, more often it is a place where I lay out artwork, contemplate and remake schedules, pay bills and write.

On the  counter which was intended as a bar separating the "dining\living" room and kitchen, is crowded with two laptops another phone. There are three barstools before this counter, which only occasionally serves as a bar. The nice blond living room floor, which is rug less, is especially useful when I finish a book. I can lay out the pictures in order and contemplate what works, or, what doesn't. I convince myself that it works. Then hope for the best. 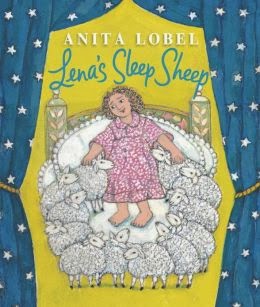 I lived in a wicked country during a wicked time. I was hunted and often hungry. The grown -ups I knew were few and far between. I knew kind nuns.

The only nice thing I knew was church. I knew the Latin of the Mass. The words of Psalms and prayerbooks. What I did not know, I did not miss.

When I started making children's books and making appearances involving children's librarians, I was and always, will be forever  grateful and in awe of them. 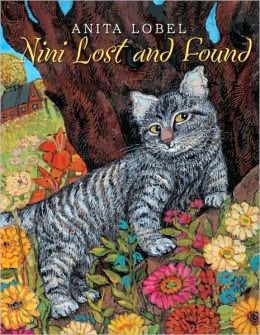 Reading is...
……is it really a disappearing pleasure and source of in- depth knowledge and information?

When I was recovering from madness and no civilization and tuberculosis, in a sanatorium in the south of Sweden, I discovered books. They were handed to me by kind nurses who gave me food, clean clothes. Who tucked me into a clean bed. Who smelled clean and nice.

Some of the books I was given were nice little ones with pictures.

Eventually I got big fat ones with a lot of text and adventures which I willed myself to decipher, until the texts flowed and cascaded into me like water.

Eventually I learned the beautiful language I was surrounded by. A language, which forever is as though it is always spoken quietly and gently. In which there is music in every cadence and in which no one ever seems to be shouting. The first books I ever read were in Swedish.

My relationship with books is a romance. I do not know how to be didactic or political about it.

When my children were young readers, I never needed to prod them to read a book

Because, I have lived so close to and have known and loved some of the best artists and writers in this field, I will continue to believe that  these often silly, or screwball or tender and sometimes very witty and sophisticated 24, 32, 40, 48 or more page wonders, will stay with us for a while yet.
not finished yet. 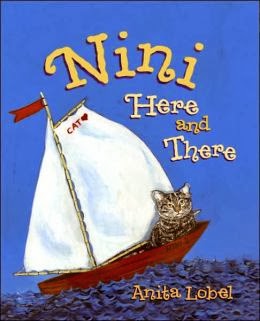 Mr. Schu, you should have asked me... 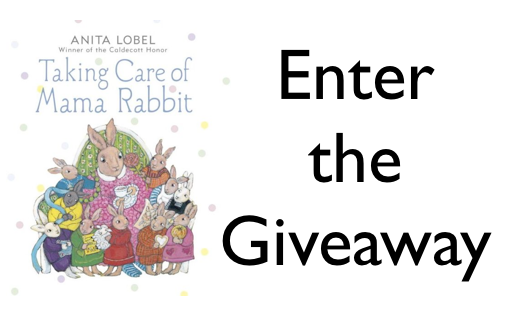 I am giving away a copy of Anita Lobel's Taking Care of Mama Rabbit.