Katherine Roy's Neighborhood Sharks was sent out into the big world on Tuesday. The Nerdy Book Club, Colby Sharp, and I are celebrating this STUNNING nonfiction book today. I cannot wait to tell everyone about it next week in Florida (FAME Conference) and North Carolina (NCSLMA Conference). 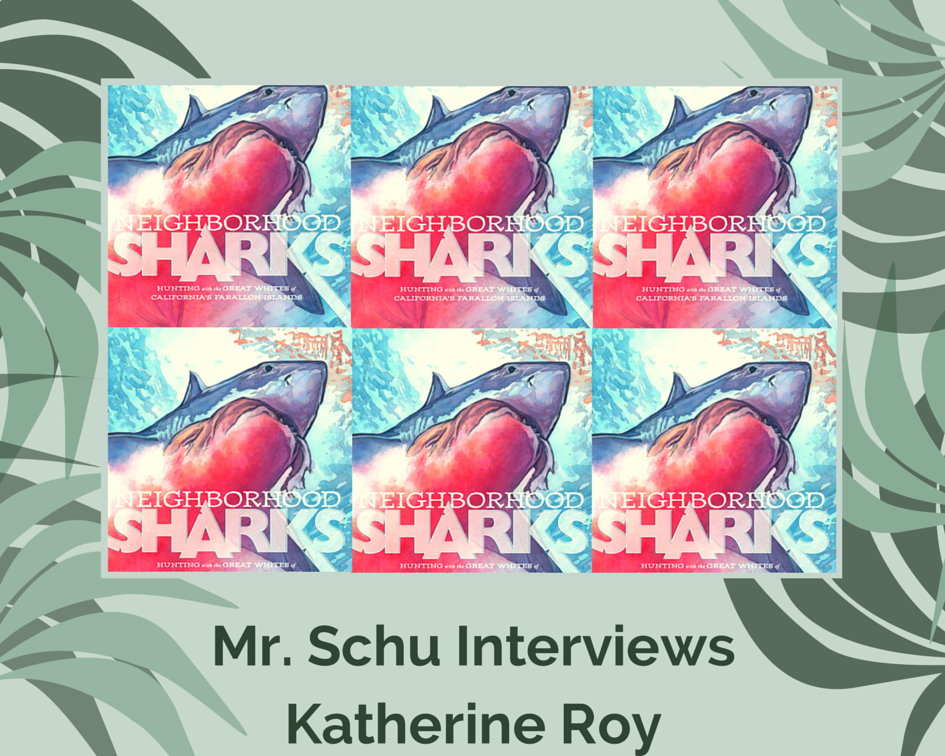 I think Neighborhood Sharks: Hunting with the Great Whites of California’s Farallon Islands has been one of my favorite, most challenging life adventures yet. The book started three years ago in a conversation with my editor, and brought me within petting distance of several great white sharks! I’ve learned so much since its conception—about research, writing, field research, making final art, and of course, about white sharks themselves. They’re ancient and gorgeous and incredibly cool, and I’m honored to get to share the science of the way they live with kids and parents for my debut. A book about a day in the life of the largest living predatory fish in the ocean? What a cool way to kick off a career in children’s book publishing! We’re gonna need a bigger bookshelf! 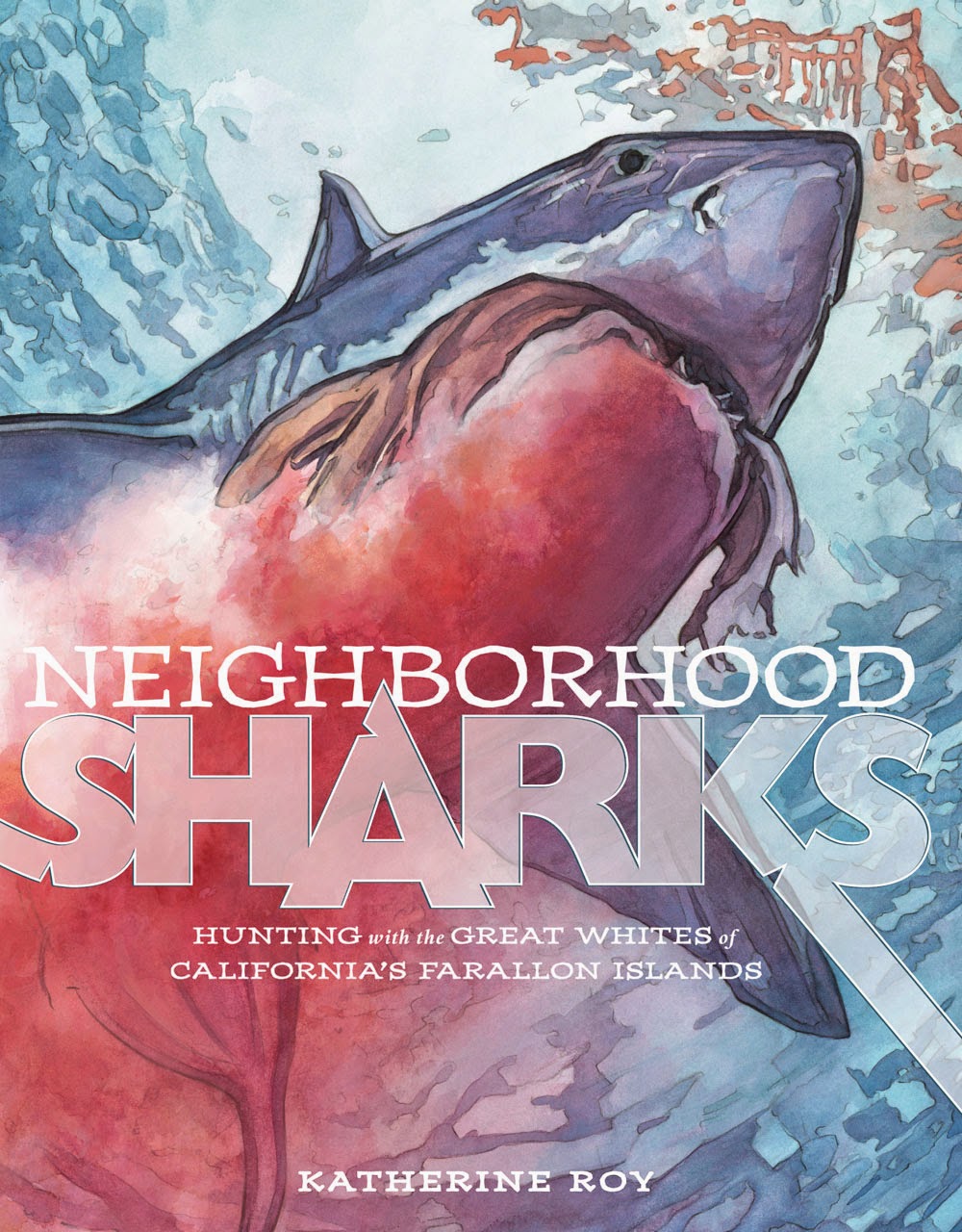 The paintings and diagrams in Neighborhood Sharks are just the surface, the tip of the iceberg, for the research, thinking, and doodling that went into each one. It’s easy to look at a finished page and think, “Of course! That’s just how it should be!” but there’s a lot of failure behind every solution, lots of dead ends and bad ideas. An example that comes to mind is the “BUT NOT SO FAST!” spread, which discusses how a Farallon white shark will sometimes steal a seal carcass from the shark that made the kill. The first few attempts at this image were rather comics-like, with a big bully shark swimming by to snatch away supper, but over and over again the spread didn’t feel right, and I got more and more frustrated. It wasn’t until much later, when I was sketching on a bus, that I hit on what would become the final composition for the page spread. My doodle felt right, and had a left-to-right visual flow, that was both striking and kept the story moving forward. My writing starts with drawings, too; I think in composition, color, emotion, and mood, and I use my sketches to organize the initial outline for my books. 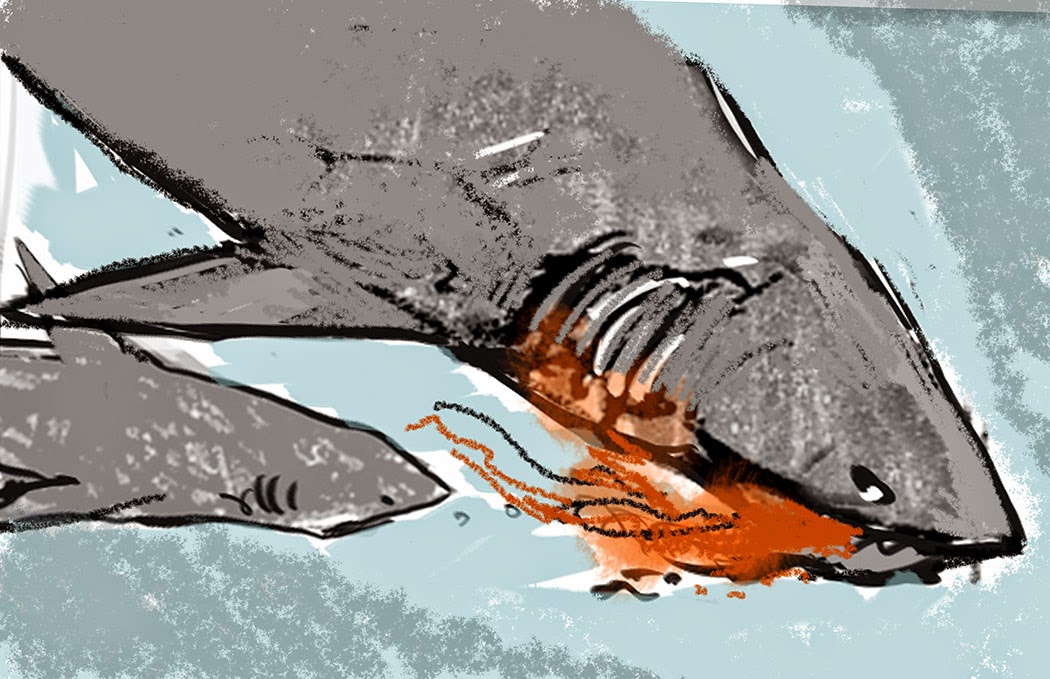 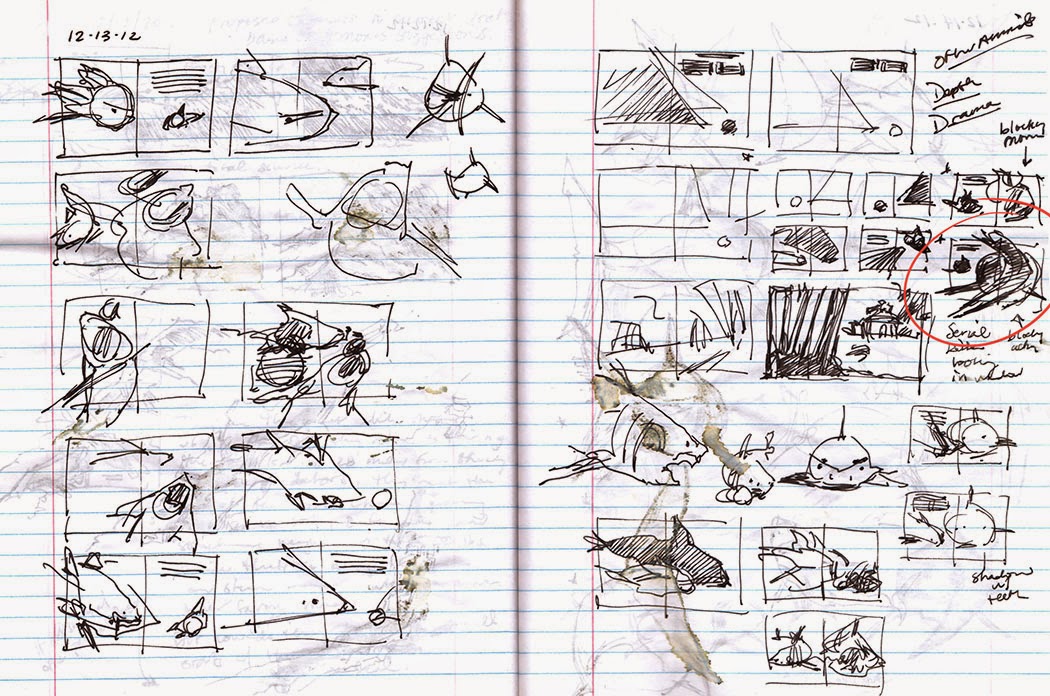 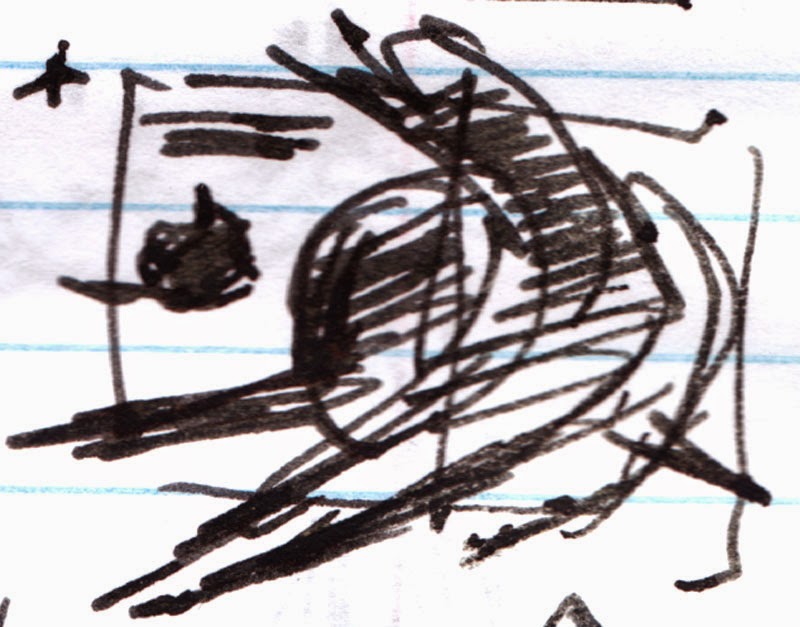 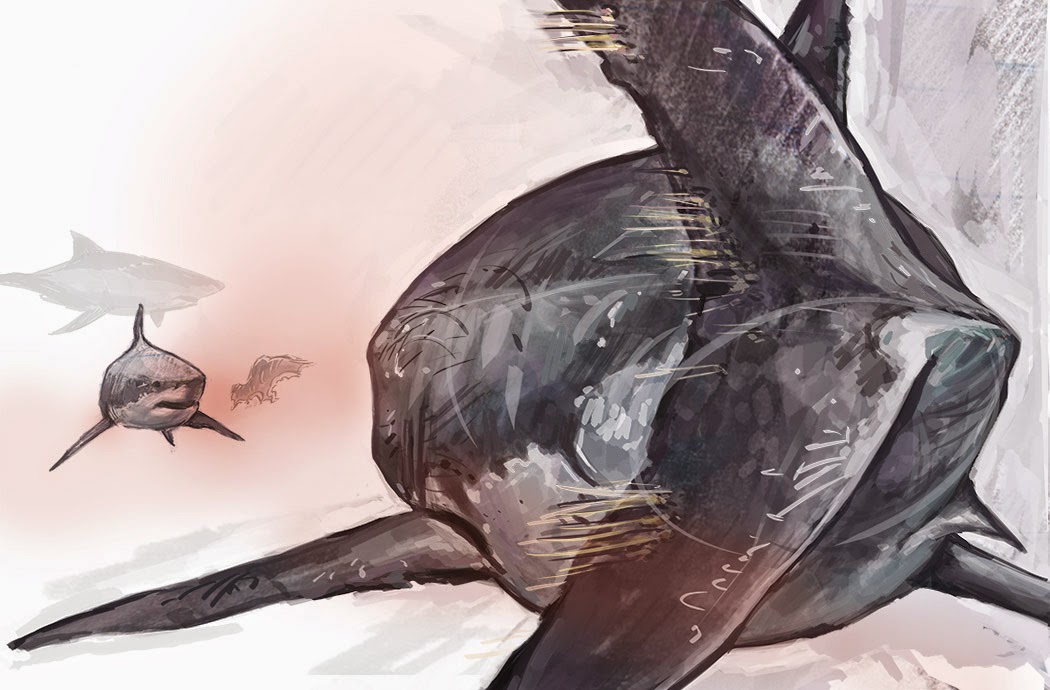 David Macaulay terrified every student in my spring semester sophomore illustration class at RISD by announcing that he would not assign homework, but would instead give us two assignments per class, every class, on the spot from start to finish. They usually began with a prompt like “The Deadline” or “The Missing Keys,” and we’d have 90 minutes to sketch out a solution and then hang it on the wall for a group crit. After the initial fear wore off, I found that I loved this high-intensity process of “writing” with sketches, including the right clues and answering the right questions. The following year I did an independent study with David and then kept in touch with him after graduation, and eventually landed in an MFA cartooning program just a few miles from his home in Vermont. When he first told me about his nonfiction imprint I thought, “Wow! What a cool opportunity. Too bad I don’t like drawing machines.” At the time I didn’t know that my passion for ocean science and the natural world would turn out to be a great fit for his new imprint. Now, years later, I still send him my in-process work, and we bat ideas back and forth if I’m stuck and need another set of eyes. He’s been a tremendously generous mentor and friend, and I’m incredibly thankful to be on his team at Macmillan.

If you want to learn more about great white sharks and you can’t get on a boat and out to the Farallones right this second, then you should totally go pick up a copy of Neighborhood Sharks and read it. It’s great for kids of all ages, from six to one hundred! But in the meantime, let me share one of my favorite white shark facts that I learned from the Farallon shark team: White sharks are visual predators, which means that they hunt with their eyes, not just with their nose! We’ve all learned from TV and movies that sharks hunt by smelling blood in the water, but it’s just not true. A white shark has high-definition daytime vision, excellent at picking out seal shapes at the surface, and once they’re at the Farallones the sharks use visual cues to track down dinner. Farallon scientists figured this out because they can use unscented seal-shaped carpet decoys to lure a white shark to the surface. This gives the scientists a chance to get some up-close GoPro footage and sometimes even secure a GPS tag to a shark’s dorsal fin to gather data on migratory routes. 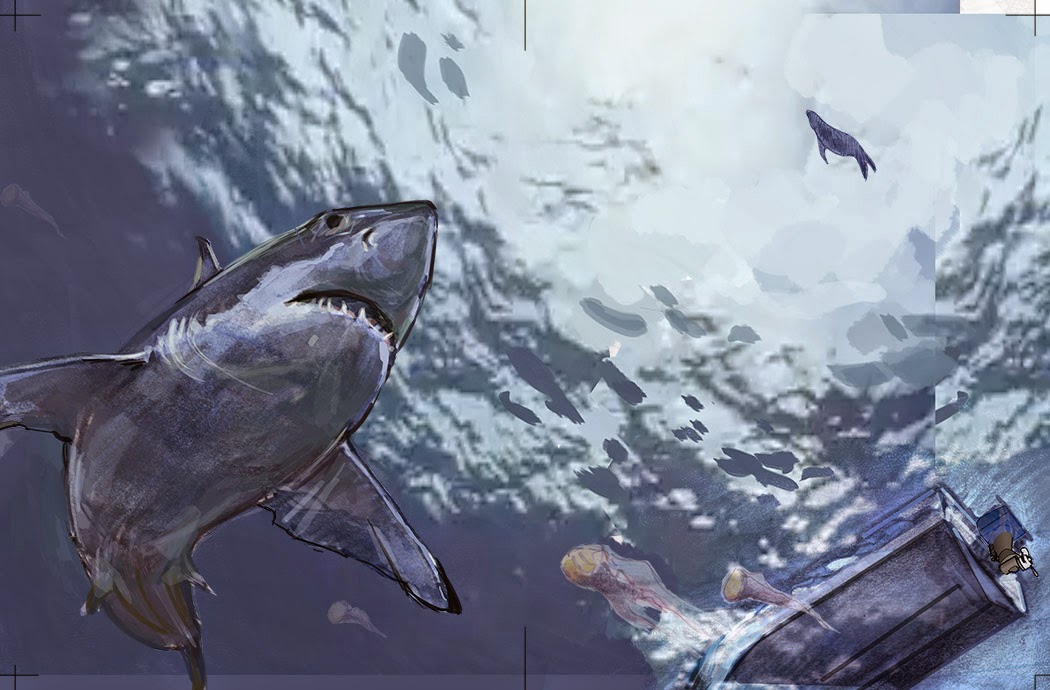 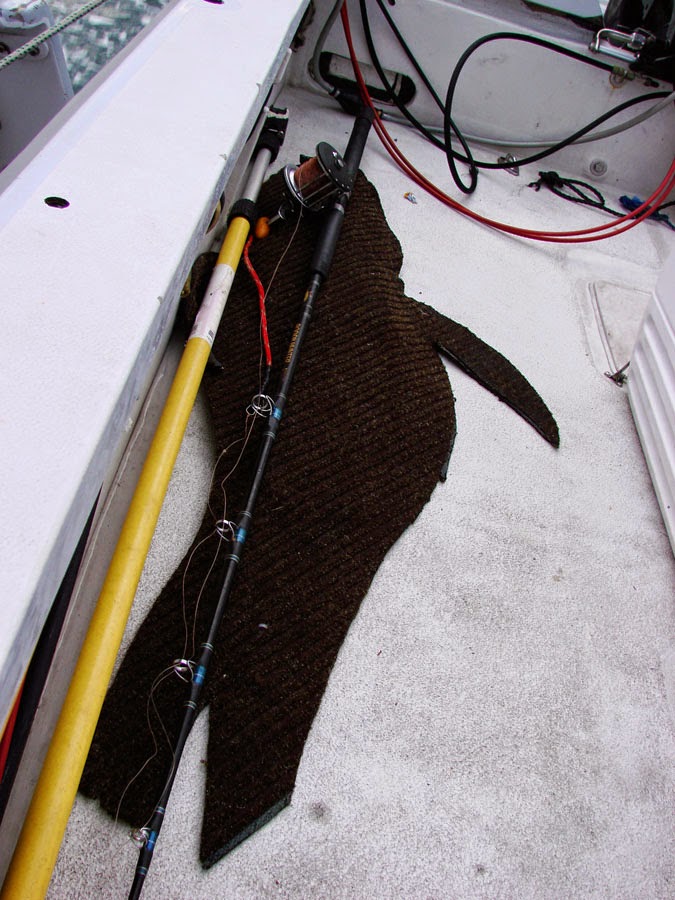 My studio is supposed to be the “bedroom” in our one-bedroom, walk-up Manhattan apartment, but I’ve shanghaied it into serving as my studio space. I write and thumbnail new projects at a desk that also doubles as a light box, and directly in front of me is a homasote board covered in Post-it notes scribbled with ideas for whatever project is in development (currently my third nonfiction book, on reproductive biology). To my right are shelves filled with picture books and loads of reference, including biology textbooks, books on sharks, a book in German on Sucessionist painters (even though I can’t read German), and lots of back issues of National Geographic that my husband thinks I should get rid of (but of course I shouldn’t). Above the shelves is what is known as “The Wall,” where the spreads from whatever book I’m currently in the middle of working on are taped up in rows (currently my second nonfiction book, How To Be An Elephant). Each time I have a major revision, I tape it up over the last version, so some of the spreads get pretty thick with layers of changes. Flipping through them is like going back in time! 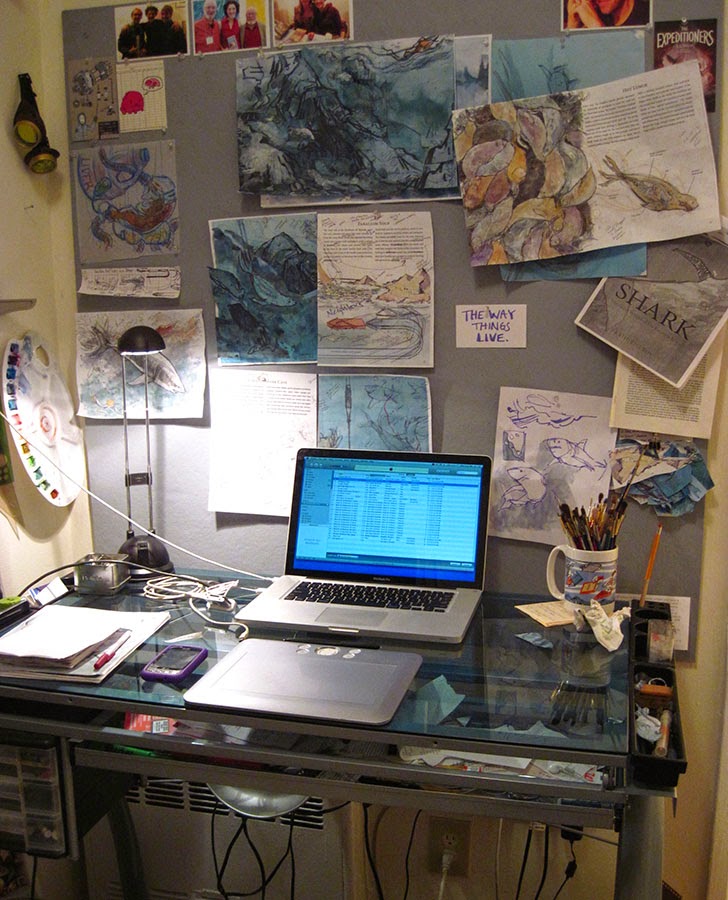 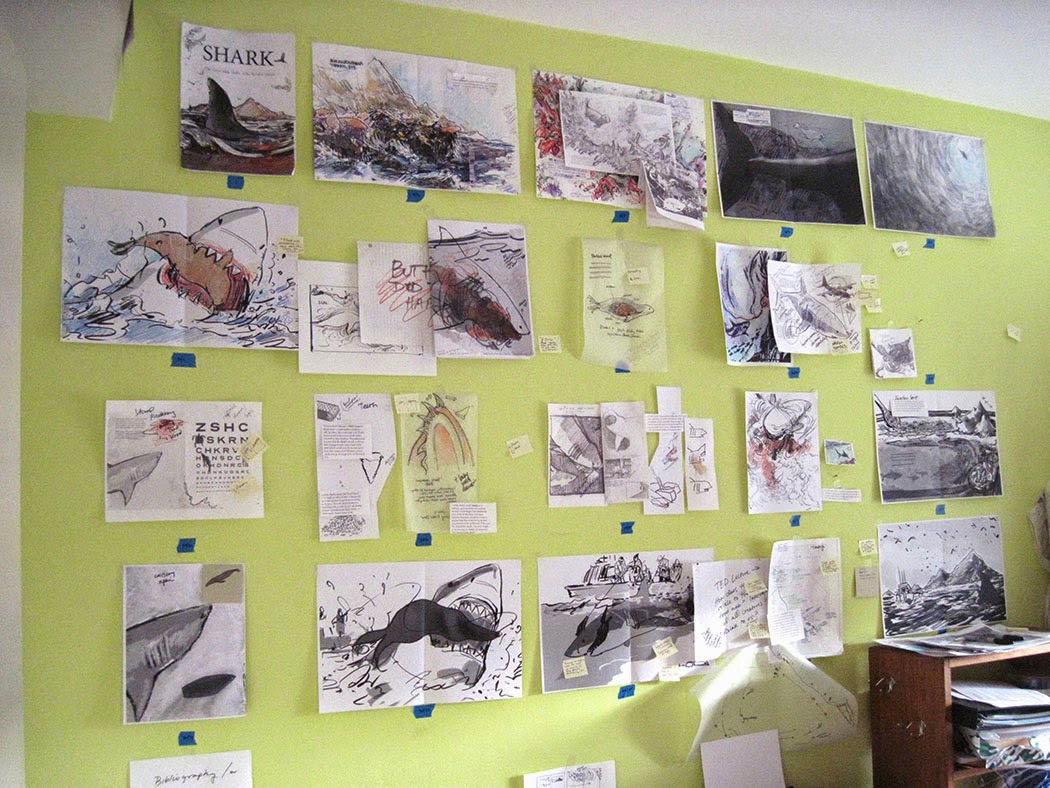 Reading is one of life’s best things. I can’t remember ever not knowing how to read—my grandmother was an elementary school teacher and she taught me to read very early on. I would get in trouble all the time for reading in class when I was younger; it just didn’t occur to me that even if you hide your book under your desk, the teacher still knows that you’re reading because your eyes are moving while you stare at your lap (duh!). I remember reading Hatchet, My Side of the Mountain, and The BFG during class, along with Lurlene McDaniel’s Dawn Rochelle trilogy that caused a lot of crying among the fourth grade girls. Now that I’m a grown-up, I pretty much read whenever and wherever I want—on the subway, in bed, in Central Park, and if I could I’d probably read in the shower. I own so many books that I still need to read, and there are still thousands more that I want! 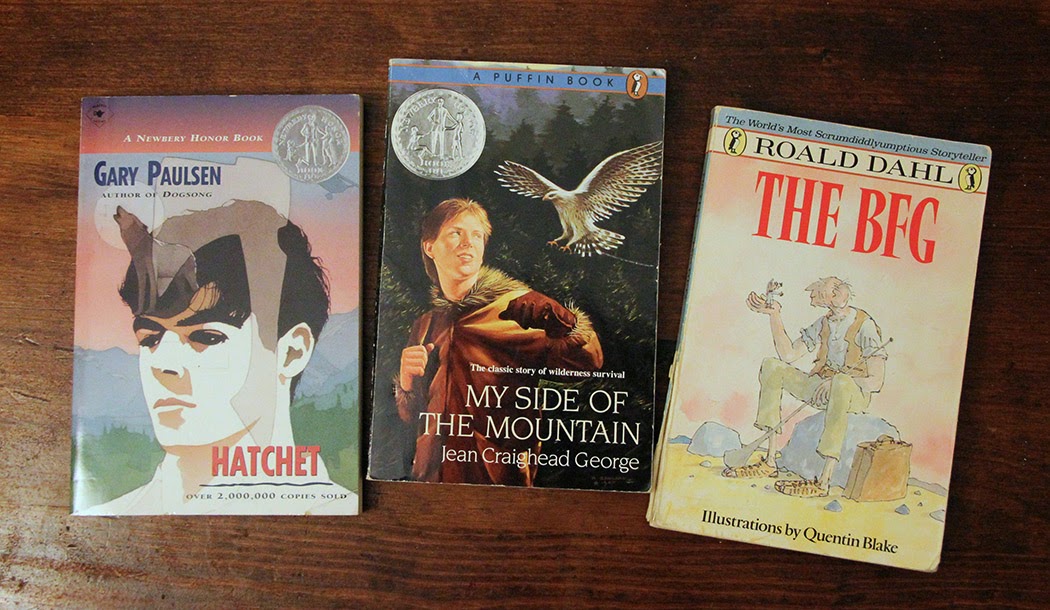 Mr. Schu, you should have asked me about my favorite reference photos of my husband, Tim, whose other career is modeling as characters in my illustrations. This is Tim as a shark scientist, shooting footage of a great white shark with a broom—ahem—I mean a GoPro camera attached to the end of a pole. And once I get this elephant costume done, well…you get the idea. 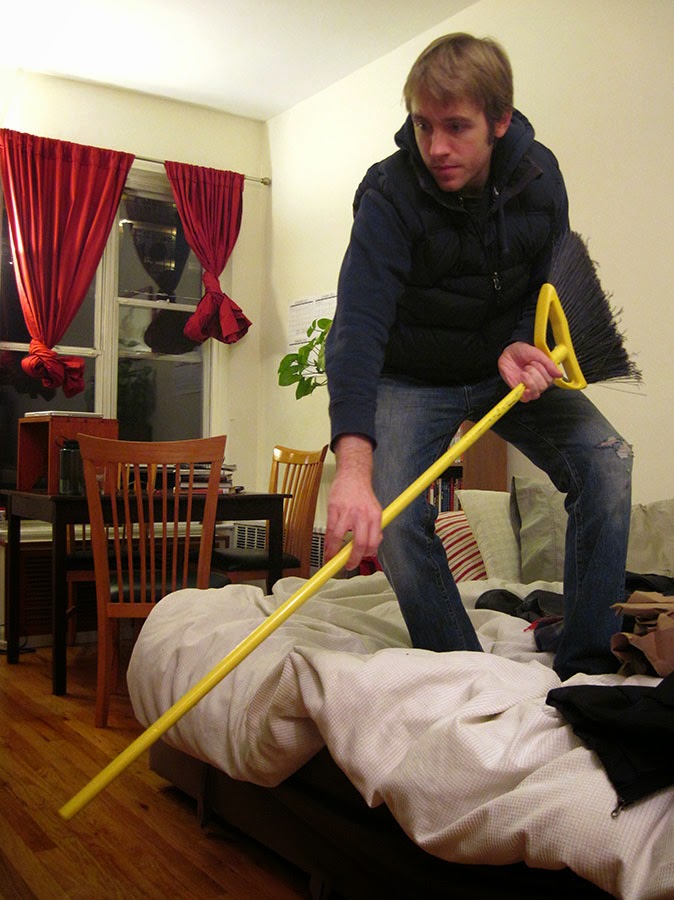 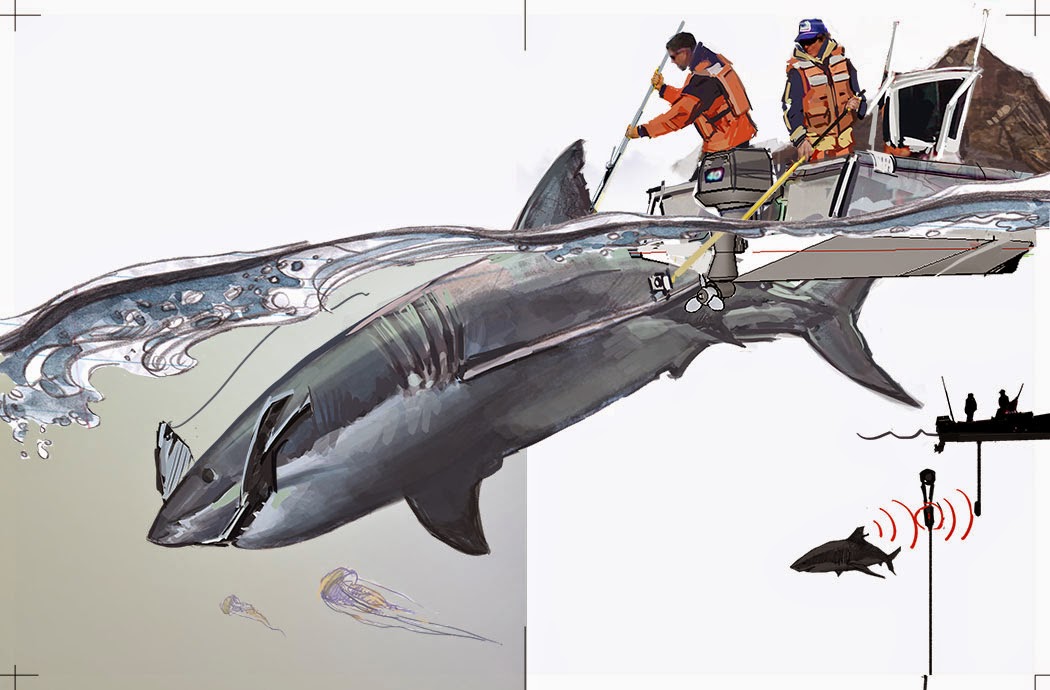 Are you ready to see what Colby and the Nerdy Book Club cooked up? 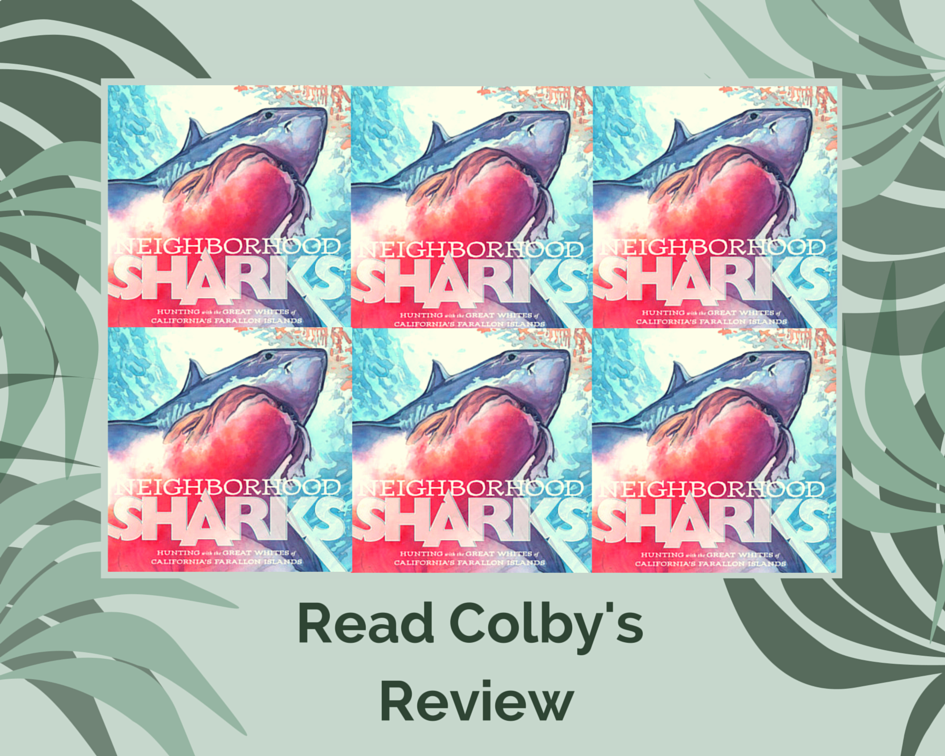 Colby Sharp shared super-positive comments about Neighborhood Sharks on Twitter a few days ago. Head on over to his blog to read his official review. 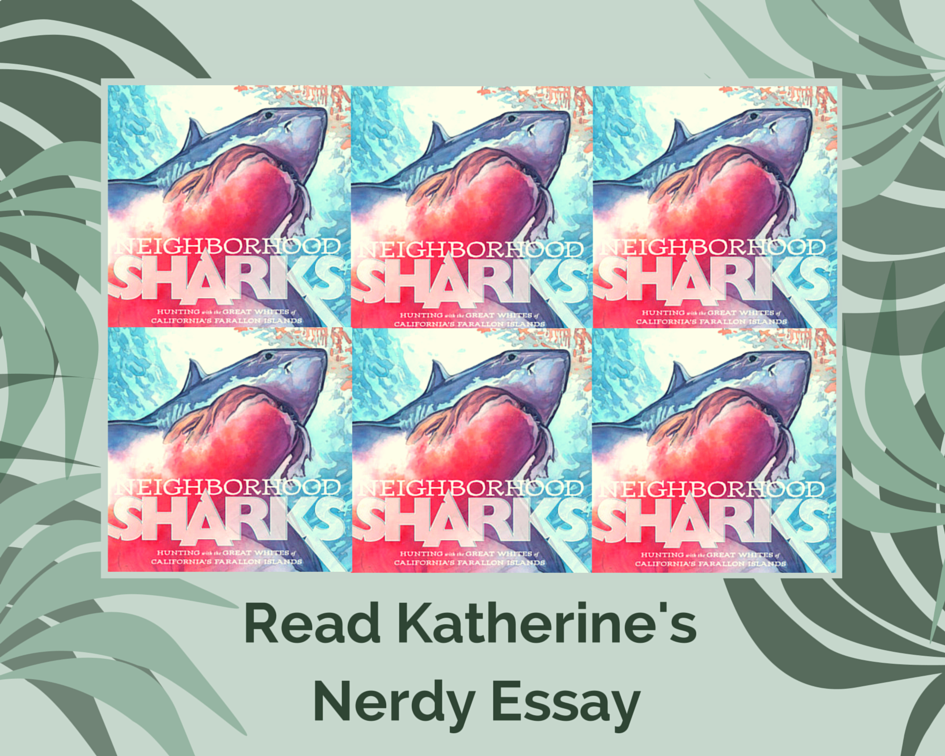 "As for becoming an illustrator, there’s no set route to follow; mostly it feels like hacking through jungle with a machete while friends with normal jobs fly overhead in jet planes. I suppose there’s a slightly safer, more parent-approved approach, like knocking out ghost work or doing corporate design." -Katherine Roy, from her essay for the Nerdy Book Club