Candace Fleming writes perfect picture books, meticulously researched nonfiction books, and funny and well-crafted novels. She can do it all! Her latest nonfiction book, The Family Romanov, hooks you from the first page. It is one of those captivating books that requires you to consume copious amounts of caffeine the next day. You know what I'm talking about, right? 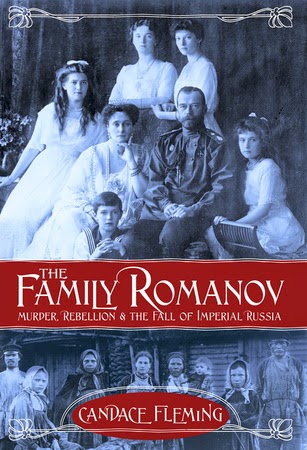 The Family Romanov tells a compelling, heartbreaking and, at times, downright weird story.    Imagine this:  The Russian royal family is living a fairy-tale existence.  The richest man on the planet, Tsar Nicholas II owns one-sixth of the world’s land, thirty palaces, five yachts, an endless collection of priceless painting and sculpture, two private trains, countless horses, carriage and cars, and vaults overflowing with precious jewels.  The Romanovs have it all!  But Nicholas is a man of limited political ability.  He’s simply not suited to rule Russia.  And a charismatic, self-proclaimed holy man named Rasputin spellbinds his wife, Alexandra.  She believes Rasputin can save her hemophiliac son, Alexei, from bleeding to death.  Desperate, she will do anything – anything -- including handing over the reins of power to the evil monk.   Meanwhile, in the palace there also lives four, beautiful grand duchesses – Olga, Tatiana, Marie and Anastasia.  But they are kept isolated from the world by their paranoid and overprotective parents.  They don’t attend balls or banquets.  They don’t have any friends their own age, or suitors, as they grow older.  The have only each other.  Living in this bubble stunts them emotionally.  Even at age twenty, Olga giggles like a schoolgirl and blushes when she sees an onscreen kiss.  With all this craziness going on inside the palace gates, no one is paying any attention to the dark clouds gathering outside them.  Starving, war-weary Russians are tired of Nicholas and Alexandra’s inept rule.  They revolt, and the Romanov’s fairy tale lives come crashing down, leading to ninety days in captivity, a horrific and bloody mass murder, hidden bodies and rumors of escaped princesses.  Wow, if that’s not a great story, I don’t know what is!


After reading The Family Romanov you’ll begin to see connections between the Romanov’s Russia and our own time.  We’re still struggling with many of the same issues – income inequality and the concentration of wealth and power; faith and leadership and whether or not our religious beliefs should rule decision-making. Perhaps you’ll even think about your family, your faith, and your government in a new light.  If nothing else, perhaps you’ll make the same connection between The Family Romanov and The Hunger Games that my friend Karen Blumenthal did.  She contends the premise of both books is the same.  That is, the rich, clueless “nobility” in the capital hold all the power while the citizens out in district starve.  Ultimately, this leads to breakdown and revolution. Who knew history could be dystopian?

Benjamin Franklin, Amelia Earhart, Mary Lincoln and Eleanor Roosevelt are close, intimate friends.  I’ve spent years listening to their secrets.  I’ve uncovered their weakness and their warts.  I’ve been an invisible daily witness to their lives, standing at their elbows eavesdropping on their conversations, observing smiles and frowns.  And in the process they’ve become a permanent part of my life.  I quote them incessantly.  I mumble to them in my office.  Sometimes I even dream about them at night.  Because of Mary Lincoln, I bake Abraham’s favorite white cake every February 12th.  (I use her recipe).  I wear Channel No. 5 because Eleanor introduced me to it.  (It was her favorite fragrance).  And I once got kicked out of the Museum of American History in Washington DC because of Ben Franklin, or more accurately, because of his printing press.  All I did was lean over and touch it.  Oh, it was a sublime moment!  In that instant research and imagination came together; at that moment Ben’s life became as true and solid to me as the weathered oak of his press; at that moment… the alarm sounded.  Guards appeared.  Under their steely-eyed gaze, I slunk away.  Ah, friends!  Even dead, they can influence your taste in food and fashion.  They can even get you in trouble.

Eric Rohmann and I collaborated for the first time on the picture book Oh, No!  We survived the process so we decided to do it again… and again… and again.  Coming this spring is Bulldozer’s Big Day (Atheneum/Simon & Schuster).  Just wait until you see it, Mr. Schu.  It’s utterly adorable.   Little readers will find Eric’s baby bulldozer hard to resist!   Next up is a piece of science nonfiction called Giant Squid (Neal Porter Books/ Macmillan).  Can you guess what it’s about?  And after that we’re doing a cozy, bedtime lullaby called Go Sleep In Your Own Bed with the amazing Anne Schwartz and Lee Wade.  As you can see, we’ve been busy.

My fifth grade teacher, Mrs. Gaskill, owned a copy of Elizabeth George Speare’s The Witch of Blackbird Pond.  I wish I could tell you it was my favorite title in her Newbery collection.  It wasn’t.  In fact, the reason I plucked it off the shelf was because the edges of its gold, Newbery sticker curled up.  I knew it wouldn’t take much to peel it off.  And I needed that sticker.  I’d just finished writing my own book –a ten-paged, ten-chapter novel called Who Done It -- and I knew my masterpiece wasn’t complete without a gold sticker.  Honestly, all the best books had one, right?  So I pried the sticker off Elizabeth George Speare’s book and stuck it onto mine.  It dazzled!  So gold!  So shiny! I felt like the most sparkling, brilliant writer... until Mrs. Gaskill made me put it back.  I did, grudgingly.  To this day, that encounter remains the closest I’ve ever come to Newbery gold.

Picture books are transformative.  Oh… wait… that's so banal.  Can I try again?  And can I tell you a story?  I’m going to assume you said “yes.”

On a still chilly April night in 1995 my four year old son and I sat reading William Steig’s The Amazing Bone.  “Later,” I read aloud, “[Pearl] sat on the ground in the forest between school and home, and Spring was so bright and beautiful, the warm air touched her so tenderly she could almost felt herself changing into a flower.”

Beside me, Mike sighed and snuggled closer.

He fell into the story.

Days later, spring finally came to Chicago.  It arrived dramatically, as it often does, warm breezes sweeping away the iron gray skies and daffodils freckling the cold earth with color.  As Mike and I stepped into that first air-soft, blossom-sweet day, he stopped.  He looked around wide-eyed.  He sniffed the air.  Then he looked up at me, and exclaimed, “It’s spring. I think I’m turning into a flower!”
You see?  Transformative! Picture books can plant a seed in a four year old’s imagination; make a connection to his life; expose him to art and storytelling and to the emotional power of the English language.

They can even change a child into a flower. 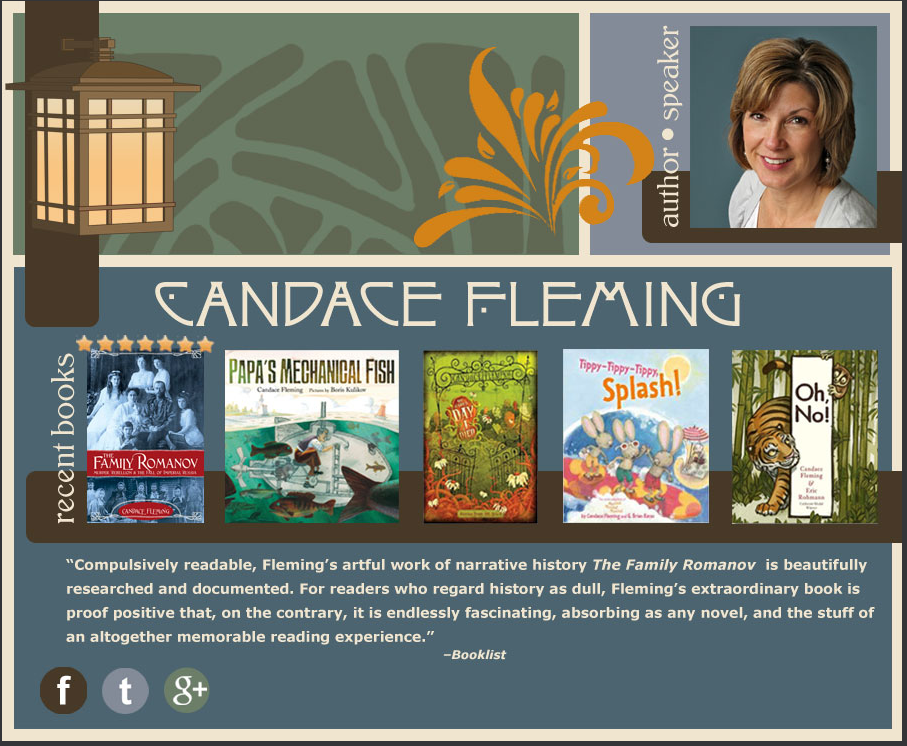 Reading is life sustaining.  I’ve known this since childhood.  The summer I turned ten my mother instituted a new house rule: No Reading At The Dinner Table.  Without this rule my father would have forked up salad and read about fly fishing, my teenaged sister, Carole, would have flipped through the latest issued of Seventeen magazine, and I would have devoured another Nancy Drew mystery along with my pork chop.  But my mother – no reading slouch herself –wanted to hear more than pages turning at dinner.

From my place at the table I could see The Secret Of The Old Attic tented on the kitchen counter, waiting for me.

The four of us looked blankly at one another.  Finally my mom said, “Read any good books lately?”
Had we ever!  We answered with a flood of titles and an avalanche of plot summaries.  I bet it was forty-five minutes before we left that table.

You can see we were reading crazy.  Words excited us.  Sentences transformed us.  Paragraphs ticked and delighted us.

I remember one Saturday afternoon when my father suddenly leaped to his feet, flung on his jacket and grabbed up his car keys.

“Where are you going?” my mother asked.

“To the library,” my father replied.  “I need something to read.”

It’s funny how such a small incident can reveal such a big truth.  At that moment, I realized my family and I didn’t just like reading.  We needed to read.  We needed reading the way we needed air, water and -- if it’s on my list of life-sustaining elements – chocolate.  Basically, we couldn’t live with out it.  I still can’t.


Mr. Schu, you should have asked me to lunch.  We live so close.  I’ll bring Eric along, and we can talk books and reading and all things literature.   And let’s go to Russian Tea Time.  We’ll have borscht and blini.  The Romanovs would have approved.

Sounds good to me, Candace! Let's do it! 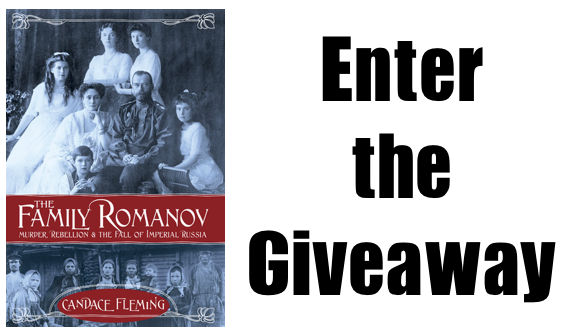 I am giving away one copy of The Family Romanov.