As you know, every Friday an author or an illustrator drops by to finish my sentences. Lucky me, right? This week's special guest is author Amy K. Nichols. We chatted about her debut novel, book trailers, music, her second novel, and reading. I wrote the words in red, and she wrote the words in black. Thank you, Amy!

The book trailer for Now That You’re Here was so fun to make! I have a background in graphics and web design, so I thought I'd try my hand at video editing. I used the jacket copy (which is also the first chapter of the book--it's super short) for the narration, and my friends' daughter generously provided the voiceover in return for a copy of the book. It took me a couple of days tinkering around with effects and whatnot, but in the end it all came together really well (I think!). When I showed it to my editor, she loved it and forwarded it on to marketing, who posted it to the Random House YouTube channel. That felt like a huge compliment. Now I'm having fun working on a trailer for the second book. 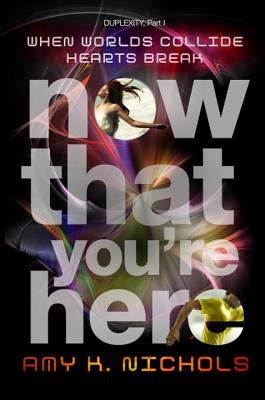 Now That You’re Here tells the story of Danny, a boy who jumps to a parallel universe where his friends are his enemies and his parents are dead. There he meets Eevee, a girl he thought he knew from his world, but even she is different in this new place. Together they try to figure out how he jumped worlds and how to get him back home...if back home is where he wants to be.

While You Were Gone is the second book of the Duplexity series. The story takes place in the alternate universe (where Danny of the first book came from) and tells the story of the other Danny and other Eevee. In While You Were Gone, Danny finds himself in a world where he has everything he's ever wanted--a family, a best friend, even a girl who likes him--but in a society that's about to implode. He and Eevee end up working together to take down a surveillance system that not only oppresses citizens but plays a role in Danny's world-jumping. One really fun part of these books are the crossover scenes. The books take place on the same timeline, and there are points in each book where you see glimpses of the other world. When you read the second book, it changes your understanding of the first book. It's pretty mind-bendy, and was a lot of fun to write. The cover of While You Were Gone was just recently released. Would you like to see it?


One of my favorite parts of writing both Now That You're Here and While You Were Gone was the research. There's a lot of science in these books, especially Now That You're Here. My editor, Katherine Harrison, and I decided we wanted to use actual scientific theory to explain Danny's world jumping, which was a pretty tall order. While time travel is theoretically possible, parallel universe jumping is not. So, I did a lot of research (and a huge amount of revisions) trying to create a construct that would allow Danny to make the crossing. It was so much fun, and only served to fuel my fascination with astronomy and quantum physics. I really hope it sparks that interest in readers as well.


Reading is a form of time travel! Opening a book is like taking a ride in the TARDIS or a decked-out DeLorian with a flux capacitor. You can go anywhere in space and time by simply reading, which is what makes it so awesome.

Mr. Schu, you should have asked me who I think I am in a parallel universe. (Hmmm...) 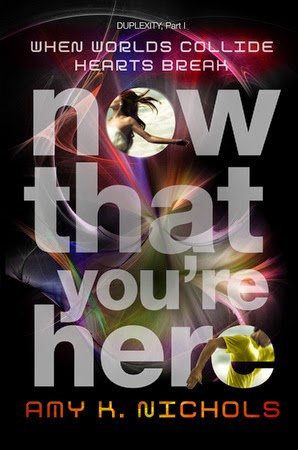 Borrow Now That You're Here from your school or public library. Whenever possible, please support independent bookshops.
Email Post