I wish I could say the video you're about to watch stars my students. It doesn't! But I know they would provide similar responses. My kids are wild about Claudette, Marie, and Gaston. 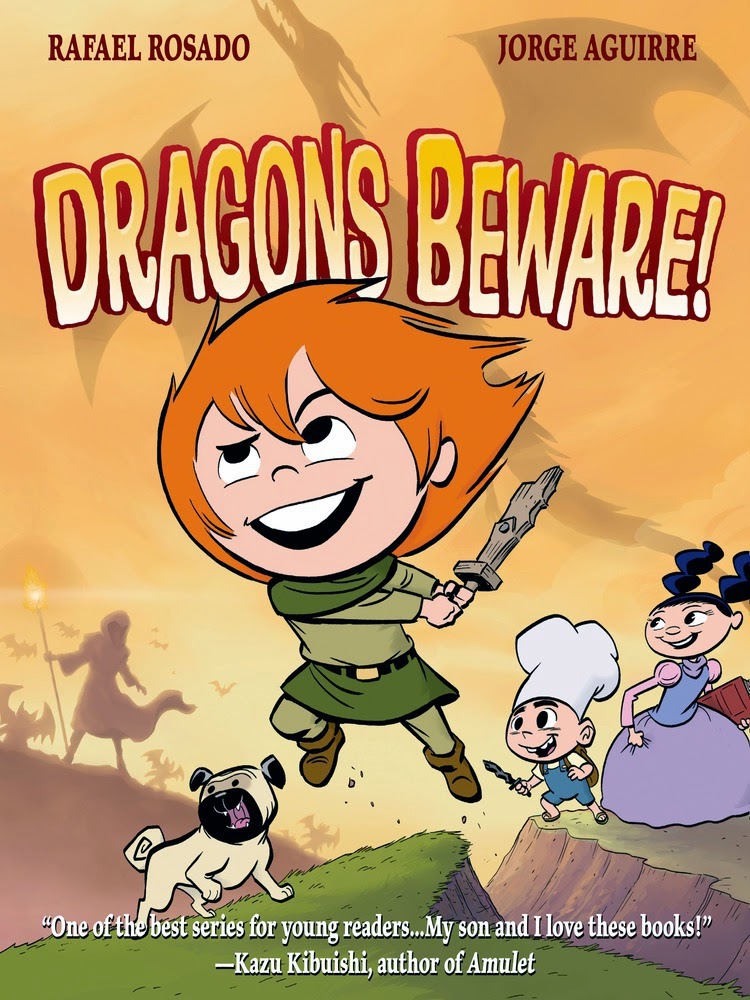 Sit back, relax, and get ready to smile for fifty-five seconds!


Let's flash back to April 20, 2013, the day I posted my interview with Jorge and Rafael about Giants Beware!

Mr. Schu: I’m interested in how you collaborated on Giants Beware! Did you outline the story together? Did you work on character sketches together?
Rafael Rosado:  First of all, thanks for helping us celebrate the one year anniversary of GIANTS BEWARE!, Mr. Schu.

Jorge Aguirre: It’s been an incredible year.
Rafael:  To answer your question.  Claudette had been in my head for a number of years.  I had this pitch idea for a  t.v. show... I think it was called Poor Little Rich Girl... and the sketch I had of the main character, was basically an early version of Claudette.   She had the spiky red hair, and tons of attitude. That pitch didn’t go anywhere, but the character that was to be Claudette kept showing up in my sketchbooks. I didn’t know where to go with her, but I knew she had potential.
Jorge: And Rafael and I had been talking about collaborating for years.  We went to film school together at the Ohio State University.  Rafael and I had collaborated on a film project even though the resulting film was pretty bad, we really liked working together. Fast forward many years later and we were talking again about working together.  Rafael shared the sketches of Claudette... by then it was three kids and they kind of looked like French street urchins.  Rafael had a basic story and let me go off and see if I could develop the world and characters.  I had a ball and wrote a rough outline of a story and some character backgrounds, etc.  After that it was a lot of back and forth as we went from paragraph synopsis, to outline, to script, to pages.  We were re-writing stuff until the last minute.   As a writer for me, the most important part is re-writing.  The writing process is basically getting everything out there without self-editing too much.  And then you edit and edit and edit until it hurts.  Rafael was a great collaborator in that sense because he kept helping me see what we actually needed for the story.


Mr. Schu: I’m very impressed with your television credits on IMDB. (Jorge’s credits. Rafael’s credits.)   How did your background in the animation industry influence Giants Beware!?
Rafael: Working as a director and a storyboard artist all these years has helped me develop a shorthand for visual storytelling.  When I read a script I can visualize it right away. I asked Jorge to write the script in film script format (mostly description and dialogue), as opposed to a comic book script format (where the writer calls out the page panel by panel). It’s what I’m used to. That way I could determine the pace and the continuity the way I do when I’m storyboarding a TV show.
Jorge: If nothing else, working in TV teaches you deadlines.  It also teaches you discipline and structure and thinking about the story you want to tell and the story that your audience would enjoy. Writing-wise, we developed a script style that started out as a movie script format.  But I would put too much action in it and Rafael (and re-reading Scott McCloud) helped me see that in graphic novels, you’re basically not calling out actions but moments in time.  Rafael doesn’t need me to call out panel by panel like a traditional comic book script.  So we landed kind of somewhere in the middle, where I tried to call out general moments but left it open for Rafael to do his thing.  And like I said, the script gets tweaked and edited as we go and as Rafael draws. 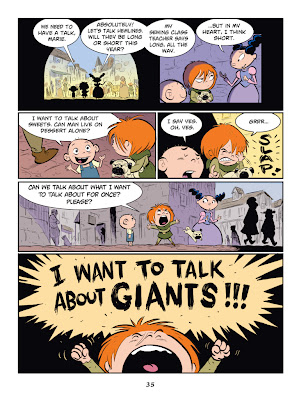 Mr. Schu: Why do you think kids are wild about graphic novels?
Rafael: I think they’re attracted by the visuals in the first place. They’re drawn in by the seemingly simple storytelling.  It’s almost like they’re watching a mini-movie. Except the comic book format still allows the reader plenty of room for interpretation, your mind fills in a lot of the gaps, so it’s more interactive than just watching a film or a TV show.
Jorge:  A well-told graphic novel can be a very dynamic way of telling a story. You don’t have all the storytelling space of a novel and you can’t spell everything out like a movie, so you end up with pieces of action and the reader, completes it in their head with their imaginations. 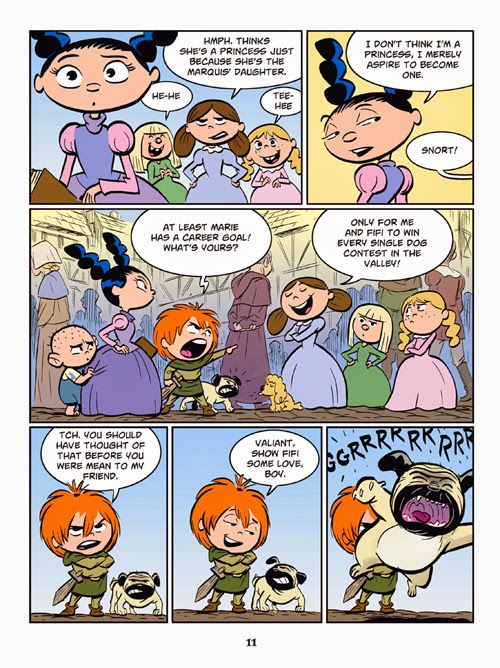 Mr. Schu: I’ll ask the question everyone wants to ask: Will we get to spend more time with Claudette, Marie, and Gaston?
Rafael/Jorge:  Yes!  Next question.  Just kidding.  We’re hard at work on the sequel.  The script’s written, the pages are being drawn.  We’re getting there! Hopefully it will come out next year, they haven’t set a release date yet.  The story will explore what happens when Claudette decides to get back her father’s most powerful sword, which happens to reside inside the belly of a fierce dragon. 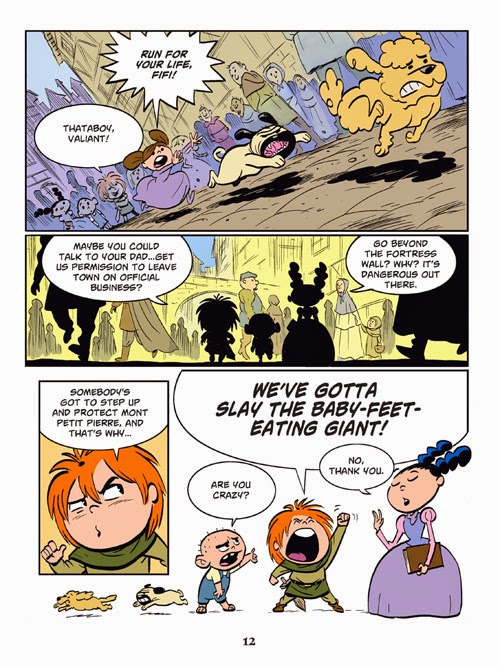 I hope Giants Beware!…
Rafael: ... is just the first of many stories to come starring Claudette and friends. We have a lot of stories to tell with these characters, and it’s all part of a larger story.
Jorge:  ...bring a lot of smiles to the faces of lots of kids old and young.  And what Rafael said!  I hope there are more stories to come.  I love going back to Claudette’s world. 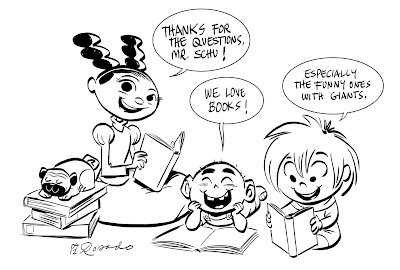 Reading is…
Rafael:  A way to avoid the existential void that is life. Just kidding. It’s a great way to spark your imagination, gain knowledge, explore new worlds and ideas. Reading is awesome!
Jorge:  Therapeutic.  It releases the imagination.  It makes you a part of a community with people who have read the same book, been to the same world, taken the same literary journey.
Mr. Schu, you should have asked us…
Rafael:  What comic artists have influenced you the most?  And I would have said... Jack Kirby, Jeff Smith, John Buscema, Katsuhiro Otomo, Osamu Tezuka (the list goes on, and on), and a bunch of European cartoonists not a lot of people have heard of over here, like Yves Chaland and others.
Jorge:  Anything besides Claudette in the works?  And I would have answered, yes, glad you asked, Mr. Schu.  As a matter of fact Rafael and I are developing a few other ideas, we’re not sure yet if they’re graphic novels, TV shows, or movie, but we’re trying to create worlds we want to go to and hope others join us.