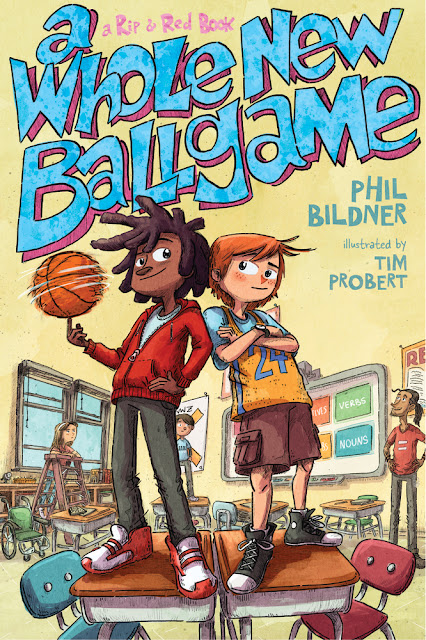 Last spring, author Phil Bildner asked me if I'd be interested in getting a group of students together to help him create the official book trailer for his new middle grade novel, A Whole New Ballgame.  I've known Phil Bildner for several years, and he visited my school, Hamilton Elementary, back in December and conducted writing workshops with the fourth graders.

I asked each of our four fourth grade Language Arts teachers to select two deserving students to participate in this once-in-a-lifetime, top-secret opportunity. I say top secret because the kids didn't know all the details about the projects.

For three months, the eight students met in the library office twice a week during lunch. Together, we read an advanced reader's edition of the book. We called our book club "The Bildner Bunch" and had fabulous discussions about how we label each other, what makes a good teacher, and what is autism. We also talked about looking at the world from other points of view. We even stood on the library's circulation desk - including a student in a wheelchair - just like the kids in Mr. Acevedo's class in A Whole New Ballgame.  All eight students loved being a part of this group. They loved knowing they were the first kids to read a book that hadn't been published. They loved knowing they were going to make the official book trailer.

One of my favorite moments (there were several), was during our first Bildner Bunch meeting. Phil and I arranged a surprise meeting through FaceTime.  When his call came through, everyone stopped chewing their lunches!  Phil explained his vision for the trailer and asked if they'd be willing to help.  Of course, they said yes! Afterwards, they asked if that was the real Phil Bildner they were talking to.

Over the next few weeks, the kids worked together to decide who would say each line and made sure the parts were divided up evenly.  They also practiced the "Rip and Red Handshake" over and over with a partner. Each pair interpreted the handshake a little differently, and it was fun to show off what they came up with.

One of the students, Reece, is in a motorized wheelchair and couldn't do the handshake exactly like the main characters Rip and Red. Reece and his partner Trey worked together in a corner to modify it so Reece could participate.  When they presented to the group, the kids all clapped and cheered (while I choked back tears of pride).

On a side note, Reece can do anything he puts his mind to, and ever since Kindergarten, his classmates have watched him conquer anything that gets in his way. He runs in 5Ks,  plays soccer at recess, and does every field day event in his walker.  Reece is very opinionated and will repeat himself as often as necessary to make sure you understand his opinion clearly.  Another of my favorite Bildner Bunch moments is when Reece asked why Avery (the character in the book who is in a wheelchair) was so angry all the time.  Reece is so optimistic and determined that he just didn't understand where her anger came from!

For the trailer, we decided two students would demonstrate the handshake, and then the whole group would do it together.  As the group practiced, they realized that Reece wouldn't be able to do the "360 turn" as quickly as everyone else and stay in sync.  They decided Trey would follow Reece's pace and the other pairs would wait for them to finish the circle before moving to the "jumping hip-bump." Watching these kids find a solution so matter-of-factly was inspiring.  They didn't view Reece's physical difference as a challenge or obstacle or handicap or problem. It was just Reece and together they figured out a way to accomplish the task at hand.  This was my favorite moment of the entire process, no doubt about it.

Once I filmed the two series of handshakes on my iPhone, the kids recorded the narration on an iPad using the Tape Recorder app.  I downloaded the audio and video to a library desktop along with the images Phil sent from the publisher.  Three of the students (Reece was one of them) offered to give up lunch AND recess to help arrange everything in MovieMaker.  Due to time constraints, I took over the final editing of the video.

The Bildner Bunch gave two sneak peaks of the trailer - one to their teachers and one to their parents (with refreshments, of course) the last week of school.  Several of us had leaky eyes after I explained how these eight were chosen from over one hundred forty students to help create a trailer requested by the author himself and to be used by the publisher as the official trailer.  I made it clear that I was only the facilitator - the students made the video.  The kids all agreed that this was WAY more fun that doing a traditional book report or even a PowerPoint. And I believe it's fair to say that each of the eight members of The Bildner Bunch are most proud of the fact that EVERYONE participated to make it awesome.