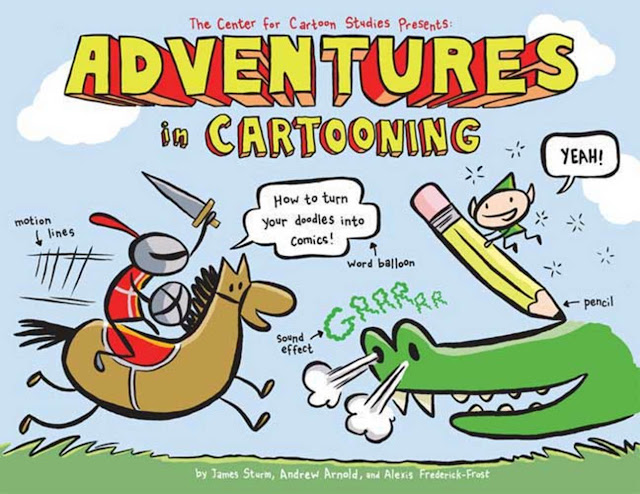 One rule of writing The Adventures in Cartooning series was to have a relentless pace to the action so young readers would keep turning those pages wanting to know what happened next. This cover captures the spirit of the series for us. What's ironic is that even though this scene reflects the gist of the story, it never actually happens in the book.

This may be our favorite cover of all the Adventures in Cartooning books we have worked on together. In an earlier version of the cover, the ogre's eye was closed. The design was solid but it was missing something. As soon as we thought to open the ogre's eye the cover went from solid to spectacular. 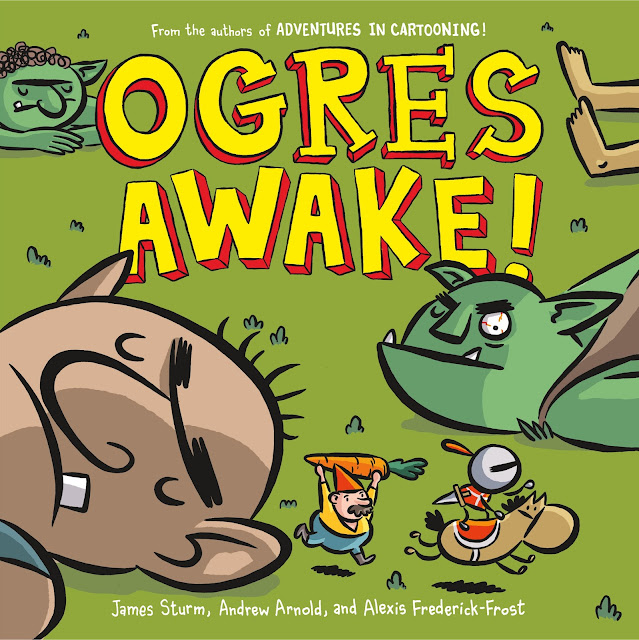 James Sturm is the author of several award-winning graphic novels for children and adults, including James Sturm's America, Market Day, The Golem's Mighty Swing and Satchel Paige: Striking Out Jim Crow. He is also the founder of the Center for Cartoon Studies and the National Association for Comics Art Educators. He created Adventures in Cartooning with collaborators Alexis Frederic-Frost and Andrew Arnold. Sturm, his wife, and two daughters live in White River Junction, Vermont.Alexis Frederick-Frost is a co-author and illustrator of the critically acclaimed Adventures in Cartooning series of graphic novels. A combination of a how-to book and an exciting adventure story, Adventures in Cartooning was chosen as a Booklist Top Ten Graphic Novel of 2010 and received multiple awards. He also writes and illustrates the recurring comic Kit and Clay published in The Phoenix Magazine in the United Kingdom. Alexis's illustrations have appeared online and in a variety of publications by Nickelodeon Magazine, Bodleian Library Press, First Second Books, Tugboat press and others. A graduate from the inaugural class of the Center for Cartoon Studies, Alexis currently lives with his wife in South Carolina.Andrew Arnold is one of the co-authors of the Adventures in Cartooning series and moonlights [during the day] as a book designer for a children's book publisher. His work has appeared in several publications, including Nickelodeon Magazine, Cambridge University Press, and Roaring Brook Press. Originally from Houston, TX, Andrew currently lives in New York City.
Email Post