Mercy Watson, the beloved early chapter-book series written by two-time Newbery Medal winner and National Ambassador for Young People’s Literature Kate DiCamillo and illustrated by award-winning artist Chris Van Dusen in his signature retro style, celebrates its tenth anniversary this year. The series, consisting of six fun-filled adventures illustrated in full color, concluded in 2009, but demand for the books continues to be strong: the series is now published in ten languages, and worldwide sales are now well over the two million copy mark.

The tongue-in-cheek tales, for readers age five to eight, star “porcine wonder” Mercy Watson, a delightfully single-minded pig, in her never-ending pursuit of treats, buttered toast, or just a rollicking fun time. When the series launched in 2005, Booklist’s starred review described the first adventure as “appropriate as both a picture book and a beginning reader,” while FamilyFun magazine recommended the series as “a gentle transition from picture books.”

Tales from Deckawoo Drive, a spin-off series set in the Mercy Watson world and launched in 2014, is for readers age six to nine. It features longer chapters, more text, and fewer illustrations, done in black-and-white. The series debuted with Leroy Ninker Saddles Up, a New York Times bestseller and Amazon Best Book of the Year starring reformed thief-turned-cowboy Leroy and his more rusty than trusty steed, Maybelline. That kickoff adventure will be followed by Francine Poulet Meets the Ghost Raccoon in August 2015, at which time Leroy Ninker Saddles Up will also be published in paperback.

About revisiting the Mercy Watson characters with slightly older readers in mind, Kate DiCamillo says, “I kept thinking about those Mercy Watson books and how much fun they were to write. I was looking for a way back into telling stories about Deckawoo Drive, and Leroy said, ‘Yippie-i-oh,’ and that seemed like a request to me.”

Join Kate for a virtual discussion of this beloved early chapter book series and the continuing stories of Deckawoo Drive with young readers on October 15th! 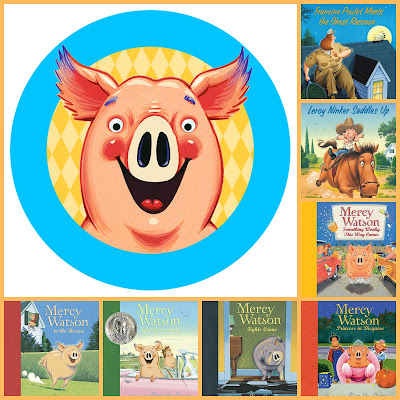