"The Mouse Council" by Liniers

First Second Books put together an epic blog tour for Fable Comics. Today is my turn to host an illustrator and celebrate a fable.

The Fable? "The Mouse Council"

Who wrote the words in orange? Me

Who wrote the words in black? Liniers

Thank you, First Second and Liniers! 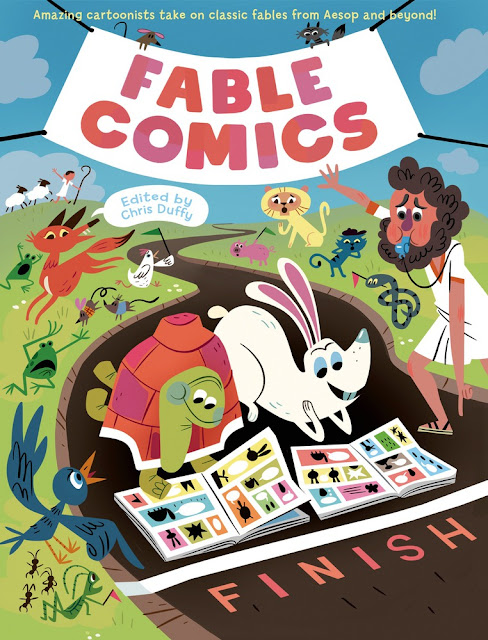 I think Aesop’s fables are a wonderful spring of imagination and intelligence. I loved them as a kid and as a grownup. The reason the are handed down from generation to generation is that they´re vehicles for tiny truths. We as a species treasure our tiny truths.

”The Mouse Council” is this witty little tale that let us know that one thing is to have an idea and assume that we're so smart... but if there´s no way to make it be... Well, it amounts to jibber jabber. 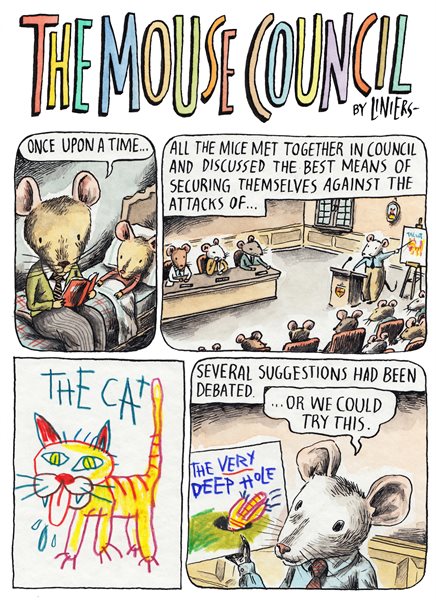 I created the illustrations for “The Mouse Council" with ink, watercolors and colored pencils. I had to come up with the way tiny mice would draw and write. That was the most fun.


Chris Duffy and I met a billion years ago in New York for a just a moment... and a billion years later he still remembered me and ask me to be in this book. Thanks, Chris!

When I was in elementary school I was shy and liked drawing. Two things that go together very well. I wish I hand´t been as shy, but maybe I would´t have developed any skills as a cartoonist. So go figure.


Reading is someone lending you their imagination and intelligence. If you like reading you get to be many people.

Comics are reading and watching movies all in one... and different. I love that comics have finally broken out of the tiny space artist used to have to develop their cartoons. Movies and novels were´t confined to adventures and jokes. I don´t know why comics were (and some geniuses really made them work within those parameters) but I´m very happy that´s over and we get to write and draw whatever we feel we have to.


Mr. Schu, you should have asked me how´s the weather down there in Argentina? I would have responded: "Why, thanks for asking. Nice, a little rain."

SLJ Good Comics for Kids features Fable Comics editor Chris Duffy, 9/21http://blogs.slj.com/goodcomicsforkids/
Charlotte’s Library features James Kochalka and ‘The Fox and the Grapes,’ 9/22http://charlotteslibrary.blogspot.com/
Musings of a Librarian features Tom Gauld and ‘The Town Mouse and the Country Mouse,’ 9/23 http://musingsoflibrarian.blogspot.com/
Sharp Reads features George O’Connor and the ‘Hermes’ fables, 9/24https://sharpread.wordpress.com/
Fly to Fiction features Sophie Goldstein an ‘Leopard Drums Up Dinner,’ 9/25http://flytofiction.blogspot.com/
Supernatural Snark features Charise Harper and ‘The Belly and the Body Members,’ 9/26 http://supernaturalsnark.blogspot.com/
It’s All Comic to Me features R. Sikoryak and ‘Lion + Mouse,’ 9/27 http://itsallcomictome.blogspot.com/
Ex Libris Kate features Jennifer L. Meyer and ‘Fox and Crow,’ 9/28http://exlibriskate.com/
The Roarbots features Eleanor Davis and ‘The Old Man and Death,’ 9/29http://theroarbots.com/
Fleen features Jaime Hernandez and ‘The Boy Who Cried Wolf,’ 9/30 http://fleen.com/
The Book Monsters features Simone Lia and ‘The Crow and the Pitcher,’ 10/1http://thebookmonsters.com/
The Brain Lair features Graham Chaffee and ‘The Dog and His Reflection,’ 10/2http://www.thebrainlair.com/
Librarian in Cute Shoes features Maris Wicks and ‘The Dolphins, The Whales, and The Sprat,’ 10/3 http://librarianincuteshoes.blogspot.com/
Women Write About Comics features Vera Brosgol and ‘The Hare and the Pig,’ 10/4http://womenwriteaboutcomics.com/
The Busy Librarian features Kenny Widjaja and ‘The Demon, The Thief, and the Hermit,’ 10/5 http://www.busylibrarian.com/
The Book Rat features Corinne Mucha and ‘The Elephant in Favor,’ 10/6http://www.thebookrat.com/
Cherry Blossoms and Maple Syrup features Mark Newgarten and ‘Man and Wart,’ 10/8https://innocencewalker.wordpress.com/
Jenuine Cupcakes features Israel Sanchez and ‘The Milkmaid and Her Pail,’ 10/9http://jenuinecupcakes.blogspot.com/
Bumbles & Fairy Tales features Ulises Farinas and ‘The Great Weasel War,’ 10/10http://bumblesandfairytales.blogspot.com/
Graphic Policy features R.O. Blechman and ‘The Sun and the Wind,’ 10/11http://graphicpolicy.com/
The Book Wars features Graham Annable and ‘The Hare and the Tortoise,’ 10/12https://thebookwars.wordpress.com/
Sturdy for Common Things features John Kerschbaum and ‘The Grasshopper and the Ants,’ 10/13 http://www.sturdyforcommonthings.com/
Kid Lit Frenzy features Braden Lamb and Shelli Paroline and ‘The Thief and the Watchdog,’ 10/14 http://www.kidlitfrenzy.com/
Maria’s Melange features Gregory Benton and ‘The Hen and the Mountain Turtle,’ 10/15http://www.mariaselke.com/
Read Write Reflect features Roger Langridge and ‘Demades and His Fable,’ 10/16http://readwriteandreflect.blogspot.com/
Email Post