Happy Monday! The #SharpSchu Book Club is discussing and celebrating Margarita Engle and Rafael López's Drum Dream Girl on December 16. Rafael dropped by to chat with me about Millo Castro Zaldarriaga, Tito Puente, reading, picture books, and murals. I wrote the words in orange, and he wrote the words in black. Thank you, Rafael! 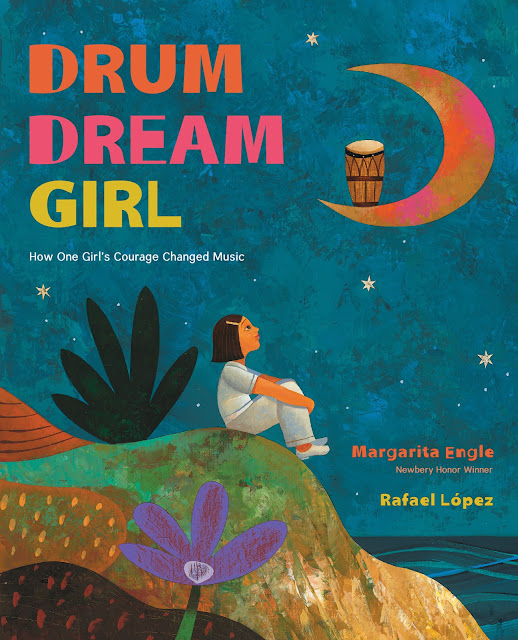 When I received the manuscript for Drum Dream Girl I fell under the magical spell of Margarita’s poetic words-a dreamlike blend of imagination and reality. I put on a favorite Compay Segundo album and moved my congas next to the drawing table. I closed my eyes and began to see the mixing of drumbeats and brushstrokes.

Margarita Engle and I were of the same mind in what we wanted to create with this book. Her poetic style gave me the freedom to invent, and I hoped the pictures would encourage children to do their own dreaming.

I created the illustrations for Drum Dream Girl trying to dance intuitively between dreams and reality. I wanted readers to enter our heroine’s surreal world with us and crisscross that river of abstraction back to realism. It was important to build a visual bridge connecting those two compelling aspects of Millo’s story.

Millo Castro Zaldarriaga’s determined spirit reminded me of my mother Pillo. In the early 50’s living in Mexico City she was ahead of her time and decided to become an architect. Her family told her absolutely not but she secretly enrolled in architectural school, paying for her education by taking several odd jobs. Millo’s courage to follow her passion regardless of the obstacles is an inspiring story for dreamers far and wide.

Book Fiesta! was out to prove there is a big beautiful world of readers out there and you can fall for a book anywhere- under the ocean in a submarine or in the mouth of a whale. The visuals come from a kid’s point of view-after all who hasn’t read to their pets? I wanted diverse children to see themselves with books having incredible adventures and threw reality out the window. My son once told me my pencil was a magic wand and I’m always trying to prove that.

Tito Puente, Mambo King! tells the story of El Rey del Mambo.  I used lots of visual metaphors and always paint listening to music, mostly Latin jazz. I let the creative forces dance in my head. I was lucky to have seen Tito Puente perform live on the streets of San Diego and create a United States postal stamp honoring him and other Latin music legends.


Picture books are refreshment for thirsty eyes. Many kids and adults [myself included] are visual learners. Engaging children in the dialogue between the world of words and images creates lifelong book passion. What could be more important?


Reading is travel to magical, far away places where you can explore the distant corners of your own imaginations. The farther you go the more you will live fully.

Mr. Schu, you should have asked me about my community murals. It’s like making a gigantic paint by numbers and it’s thrilling for small hands to make something so BIG. I have worked with hundreds of kids and families to make murals in schools, children’s hospitals and parking lots 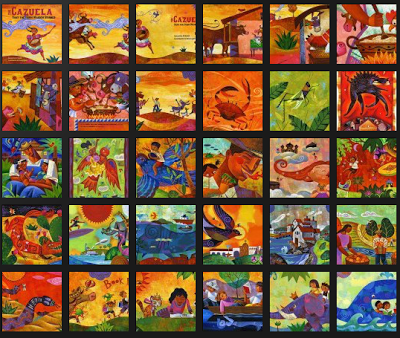