Hi, Erica Perl! Welcome back to Watch. Connect. Read. It has been too long since you last dropped by.

Erica Perl: Thanks, John! I visit your blog frequently as a reader (and watcher), but it is great to be back as a writer.

Erica Perl: Because Ferocious Fluffity is about an adorable classroom hamster who runs amok, I thought it would be fun to make a spoof of horror movie trailers. I also wanted to show a lot of Henry Cole’s amazing art without giving away the ending. And I definitely wanted to use a read hamster, too. I found my star, Hamlet, on our neighborhood listserv… he belongs to two little girls who serve as his agent (their fees were covered by a signed copy of the book). My daughter and a friend helped me film Hamlet, who was very sweet-natured (unlike both his namesake and the subject of this book).

I love the surprise under Ferocious Fluffity’s jacket.

Erica Perl: Thanks – so do I! I thought it was brilliant to use the scene of kids fleeing from Fluffity in this way. The art direction team at Abrams (including Chad Beckerman and Pam Notarantonio) did a terrific job on the design of this book. Henry Cole and I were both so pleased! 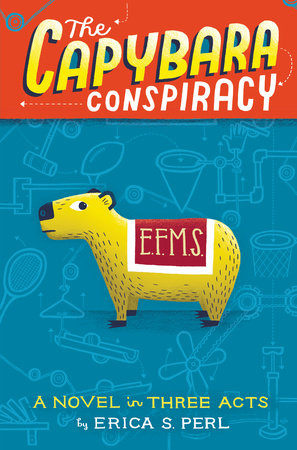 How will you celebrate Ferocious Fluffity’s (7/19) and The Capybara Conspiracy’s (10/11) book birthdays?

Erica Perl: I’m calling 2016 the year of my “Release the Rodents” book tour. I’ll be at The Flying Pig in Shelburne, VT on July 19 to celebrate the publication of Ferocious Fluffity. In October, I hope to celebrate the release of The Capybara Conspiracy with as many capybaras -- er, I mean theater-loving kids -- as possible.

*Henry Cole’s illustrations are perfect at capturing the emotional range of human and animal characters alike. I love working with Henry because his illustrations have such energy and because he always, always makes me laugh.

*Picture books are my favorite kind of books. I love the dance between words and images, and the way you can see new things in them every time you read them, and how they work best when read aloud, like theater. I especially like funny picture books. A friend sent me a note today saying, “the world needs funny books now more than ever.” I couldn’t agree more.

*Mr. Schu, you should have asked me if I ever had a pet that inspired the character of Fluffity. We had a guinea pig named Violet who bit everyone constantly. I wish I could say that, as in Fluffity’s case, there was a good reason for her behavior. She was just one seriously feisty pig! 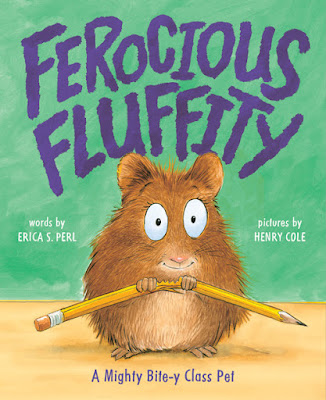