Happy Tuesday! I am thrilled to reveal the cover for Madelyn Rosenberg and Wendy Wan-Long Shang's This Is Just a Test. The cover is so intriguing and will pop on shelves. I cannot wait to celebrate it on June 27, 2017. Thank you, Madelyn and Wendy, for dropping by to reveal the cover! :) 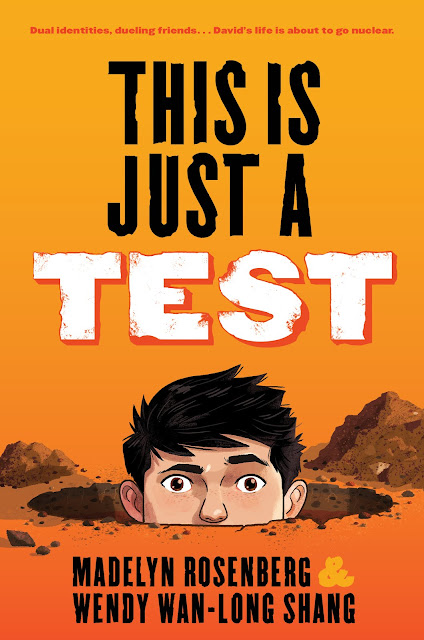 Hi everyone! Madelyn Rosenberg and Wendy Shang here, teaming up just like Cagney and Lacey (or maybe Laverne and Shirley) to introduce you to the cover of our forthcoming book, THIS IS JUST A TEST.

We love the orange color and lately we’ve started seeing it in different places, like here, on the side of Chef Bon’s Yum Truck. 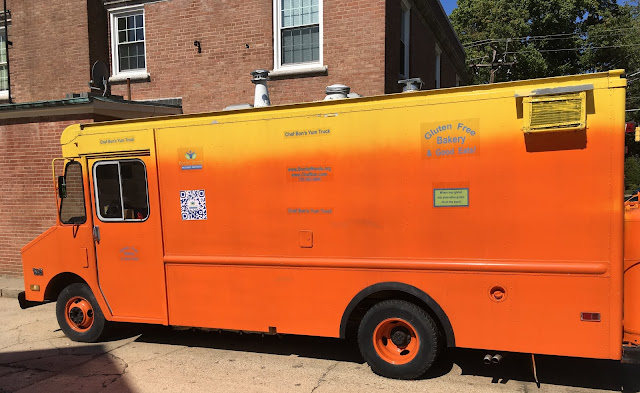 In our book, David Da-Wei Horowitz is supposed to be getting ready for his bar mitzvah and a school trivia contest. But it’s hard to concentrate when he’s surrounded by dueling friends and his dueling Chinese and Jewish grandmothers, not to mention the threat of nuclear war. Keeping his mouth shut seems like a good way to keep the peace, both domestically and abroad. But that comes with an even bigger set of problems.

THIS IS JUST A TEST (Scholastic) comes out on June 27. It was inspired, in part, by our 80’s memories of popped collars, being the ‘onlies’ at our respective Virginia middle schools, and watching The Day After on TV. Writing is usually a pretty solitary endeavor, but the two of us talked so much while we were writing this book that yes, we do finish each other’s sentences. And when we went on our separate summer vacations, it sometimes felt like we were each operating with only half a brain. We've been in the same writing group for years, but a pivotal moment in our friendship came when we discovered that Rona Jaffe’s Class Reunion was the first ‘grown-up’ book we had stolen from our mothers to read.

Thanks so much, Mr. Schu, for unveiling our cover, which was designed by Nina Goffi. (Nina also designed the cover for Badger Knight by fellow Virginia author Kathryn Erskine!)

In honor of our reveal, we're sharing our 80-est fashion moments. For Wendy, it was when a girl in her gym class told her that her light-blue-and-yellow purse was “boppy." Wendy was totally unsure whether that was an insult or a compliment. (For the record, it was a compliment.) For Madelyn, it was owning an add-a-bead necklace to which she never added any beads. She ditched it in favor of a Dark-Side-of-the-Moon button her sophomore year of high school.

Thanks so much for tuning in,