Make sure you turn up the volume on your computer before you watch the book trailer for Dev Petty and Mike Boldt's I Don't Want to Be Big. You're going to have the awesome song featured in the book trailer stuck in your head for the REST of the week.

Thank you, Dev, for taking over my blog for the day.

As kids are wont to do, they sometimes (by luck or by design) point out things you don't really want pointed out as a parent.  Sometimes they say something that stops you dead in your tracks and makes you think.

It was just one of these moments that led me to write I Don't Want to be Big, my followup to I Don't Want to be a Frog.  And this moment happened right when I was trying to figure out what I wanted to write a followup about.  I considered the obvious (if you haven't read the book, this won't make sense to you but trust me. it's hi-larious)- I Don't Want to be a Badger.  But since I really like Badgers, this seemed somewhat disingenuous.  What's more, badgers are pretty mean and I'd rather not make another enemy in the animal world- sorry again cuttlefish!  So there I was, trying to figure out what to write about and I found myself at dinner imploring my daughter to eat her food so she would grow big and tall (that's in the parent manual I sometimes forget to put away).

Now here's the thing.  She's on the small side, but is a perfectly healthy height and weight- her lovely doctor says so- she's just small.  Her great grandmother didn't crack five feet and she lived to be 106, so the small genes seem to pay off in our family.  Anyhoo, she looked at me and said “I don't want to grow big.” Naturally, I asked “Why?” And she answered, “I like being small.”

Now, I shouldn't be surprised.  This is the same kid who once posited that we humans were not, in fact, real but just toys being played with by a giant and we were just too wrapped up in ourselves to notice.  But I digress...She likes how she is.  And while she knows she will inevitably grow, she didn't see any real reason to eat food she didn't want simply for that purpose.  I probed further about this...She said she liked being able to fit in small places and be carried around and she was good at surprising people.  She is, seriously good, which can be a real problem when you're cooking dinner.  They were all pretty swell points when I stopped to think about it.

I wanted to write a book for her- for the kid who's happy how she is and who's a little skeptical about the strings attached to growing big...Ipso Facto...I will have to get an apartment and a job if I'm over four feet.

So there I was with a I Don't Want to {insert thing here}- that felt pretty good.  The only trouble was that I had no idea how to write a followup to a book I probably didn't really know how to write in the first place.  Should I try to figure out what people liked about Frog and copy it exactly?  Should I be totally different or totally referential?  My analytical side had me sketching diagrams about what was good and what wasn't- trying to sort of backwards engineering things.

Leave it to my kids, again, to make sense of things.  “Just make kids laugh,” they suggested.  Make kids laugh, eh?  Well, I'd read Frog SIX BILLION TIMES and had a good sense of the moments that kids found funny and those other moments I thought were hilarious and they smiled politely.  I had answered dozens of questions about the book from kids who wanted me to talk about certain parts or certain characters.  So I decided that the best guide for writing this book was those kids, my kids, kids.

I wrote my little followup.  I tried to write things that honored my kid and her individuality (also her semi-occasional smartypantsness) and the kids who like to laugh and don't always do exactly what their parents expect.  I Don't Want to be Big will be out in a little while- on October 11th, to be exact.  The unbelievably talented and charming Mike Boldt illustrated it beautifully again- with characters that pop off the page in a simple but bright way.  There was a lot of me in my debut book I Don't Want to be a Frog, about finding the good part of things you don't really like about yourself.  I Don't Want to be Big is then, about other people finding the good part in the things you DO like about yourself even if they run counter to expectations.  We're all going to grow, one way or the other...up or side to side...we might grow restless or grow roots...but I'm pretty sure however small she is, she's going to grow, even if she doesn't eat that last piece of broccoli. 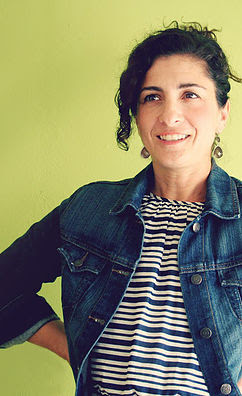 Dev Petty writes the words for picture books.
She used to be a painter in movies- like in the Matrix films and others...But now she's only artistic enough to be dangerous.

And telling stories is so much fun. She happens to like the kind that make you laugh a little and think a little.

Dev lives in the San Francisco Bay Area. She's great at word jumbles, sandwich making, and finishing thi--
She is the author of I Don't Want to be Big, Claymates (Little Brown 2017), There's Nothing to Do (Doubleday 2017) and her debut book, I Don't Want to be a Frog. 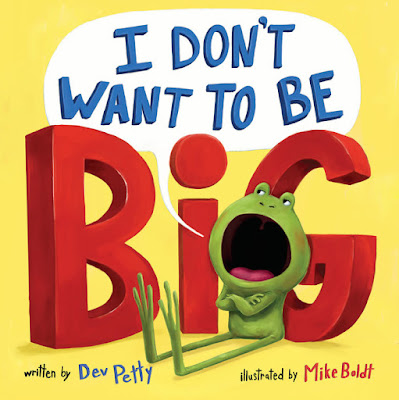