Happy Thursday! I am excited to celebrate the cover for The Youngest Marcher: The Story of Audrey Faye Hendricks, a Young Civil Rights Activist with Cynthia Levinson and Vanessa Brantley Newton. Thank you, Cynthia and Vanessa! Hi, Reader and Writer Friends. Thank you, Mr. Schu, for uncovering Vanessa Brantley Newton’s stirring cover for our nonfiction picture book, The Youngest Marcher: The Story of Audrey Faye Hendricks, a Young Civil Rights Activist, due out in January from Atheneum. Audrey was the youngest child to protest segregation in Birmingham in 1963. In fact, she was only nine years old when she was arrested and jailed for a week! She knew what she was getting into because Dr. King ate dinners at her house. She served him her favorite rolls; the recipe’s in the back of the book. 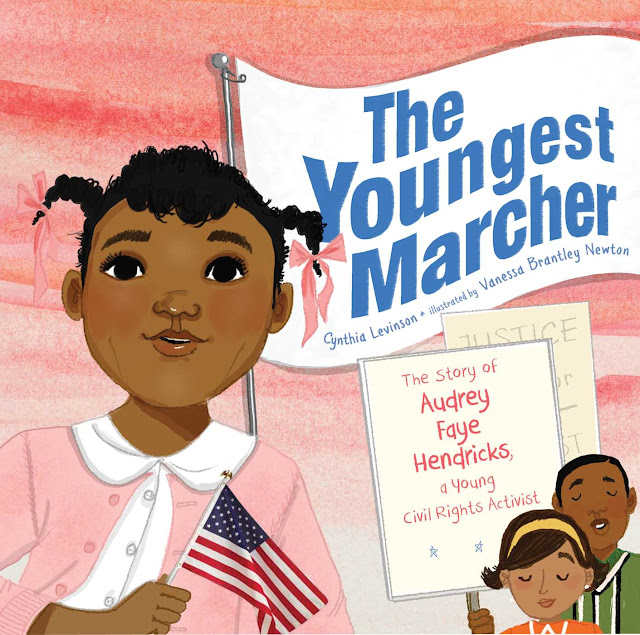 But it’s the cover that’s up front now. Here’s what Vanessa says about it: I wanted Audrey to be the hero and victor, not just a victim. I wanted young people to see themselves in her—strong, smart, and able-bodied but also with the innocence and bravery of walking into something so dangerous. Grooming was important if you wanted to be taken seriously.  When marching they took pride in their appearances. I gave Audrey a pink sweater because I had a pink sweater, and I remember how I felt when I wore it. The pink sky speaks of hope of a new day; the flag because these students, too, were Americans. The look is sober and strong.

I think Vanessa nailed it.

Look for The Youngest Marcher: The Story of Audrey Faye Hendricks, a Young Civil Rights Activist on January 17, 2017.
Email Post