Book Trailer Premiere: The Infamous Ratsos Are Not Afraid by Kara LaReau; illustrated by Matt Myers

Hi, Kara LaReau! Thank you for returning to Watch. Connect. Read. to celebrate the book trailer for The Infamous Ratsos Are Not Afraid.

Kara: Thanks so much for inviting me back, Mr. Schu!

What should everyone do before pressing PLAY?

Kara: Have no fear — a new Infamous Ratsos adventure is here!

Kara: After I wrote the first Infamous Ratsos story, I had a child of my own — a son — and I happened to watch a documentary called The Mask You Live In, which is all about our society’s narrow definition of masculinity, and how boys are encouraged from an early age to adhere to that definition by withdrawing from authentic friendships, suppressing their emotions, objectifying women, and resolving conflicts through violence.

Learning about this “boy crisis” inspired me to come up with more stories about the Ratso brothers and their friends, in which they encounter (and subvert!) typical gender norms. For instance, The Infamous Ratsos Are Not Afraid is all about how it’s okay to admit we’re afraid, and the many ways we can be brave — whether it’s ringing the doorbell of a “haunted” house, sticking up for someone who’s being bullied, or making new friends. 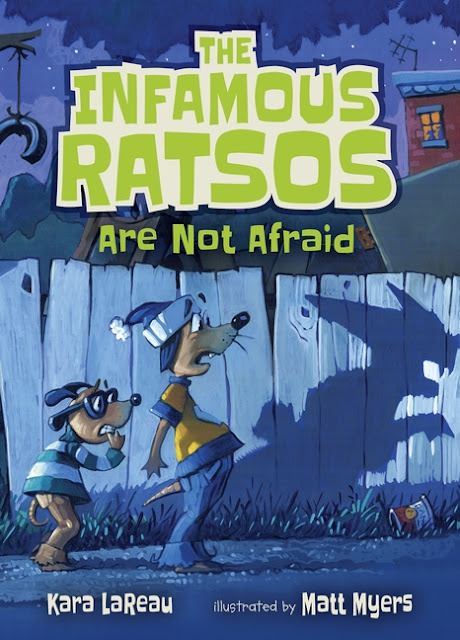 Kara: I always liked the game where you had to throw a ping pong ball at a group of fish bowls filled with goldfish — if you got the ball in a bowl, you won the fish. Sadly, I never won one, but I never stopped trying! 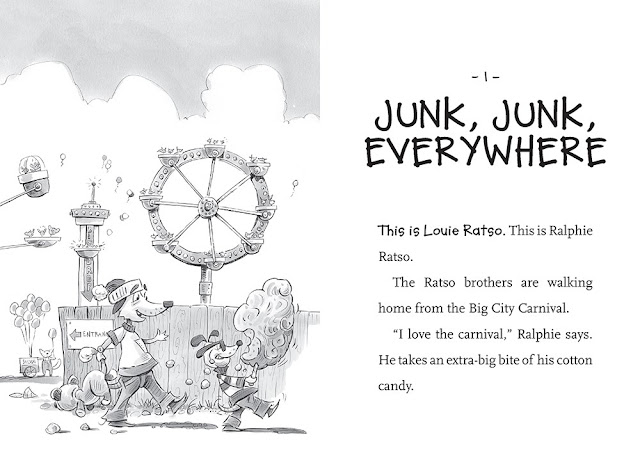 Hi, Matt Myers! What is the most fun thing about creating the illustrations for The Infamous Ratsos series?

Matt: Sketching. Finding a good moment in the story to pull out and bring to life. Working on the characters' expressions to catch the right mood is the trickiest, and most rewarding part. 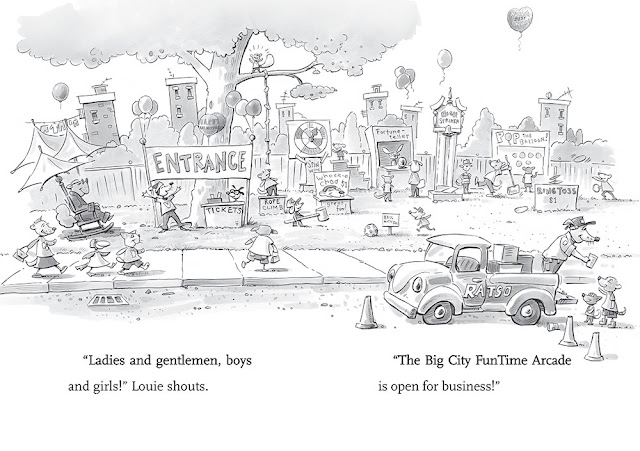 Matt: They are like real rats in that they are curious, persistent, sneaky, and often misunderstood. Unlike real rats, they are loyal.

Big Lou says you cannot have an arcade without a refreshment stand. Are we more likely to see you standing in line at a carnival for a funnel cake or popcorn? (OR neither???)

Matt: Funnel Cake. If I'm going to eat carnival food, I'm going all out. But no cotton candy. Never liked that stuff. It's like eating hair.

Congratulations on The Infamous Ratsos being named a 2017 Theodor Seuss Geisel Honor book. What does a Geisel citation mean to you?

Kara: I still can’t believe it, especially considering the wonderful stories that have been named Honor Books over the years, many of which my son and I consider our favorites. The Infamous Ratsos is in some pretty famous and fabulous company — and that continues to be an honor for me on every level!

Matt: It means I was right about this book! What I mean is that when I first saw the manuscript, so before I could claim to have anything to do with the book, I thought it was something special. I feel proud that I did a good job bringing the story out into the visual world, but really, it was already there.

Look for The Infamous Ratsos Are Not Afraid on September 12, 2017.
Email Post