Hi, Kelly Yang! Thank you for visiting Watch. Connect. Read. to share Front Desk’s WONDERFUL cover and to finish my sentences. I greatly appreciate it!

Kelly Yang: Thank you so much for having me! I'm such a huge fan! It's truly an honor to be here and to share with you the cover for FRONT DESK, a story I've lived and breathed since I was eight years old! 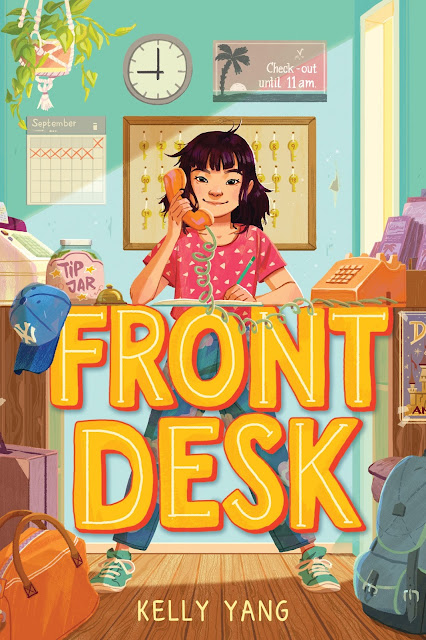 Maike Plenzke’s cover illustration for Front Desk made me burst into tears. I’ll never forget it. I was in a taxi and I just started crying. The taxi driver was like “What’s wrong?? Should I pull over??” I said, “No. No! Keep driving! Everything’s fine. Everything’s great!” while I kept sobbing. Maike did such a tremendous job of capturing the spirit of my girl Mia. I loved the details, down to the Disneyland poster and the peeling paint on the wall. It was perfect, just perfect! I’m beyond excited to share it with the world!

Front Desk tells the story of 10 year old Mia Tang. Every day, Mia manages the front desk of the Calivista Motel while her parents clean the rooms. She’s proud of her job. She loves the guests and treats them like family. When one of the guests gets into trouble with the police, it shakes Mia to her core. Her parents, meanwhile, hide immigrants in the empty rooms at night. If the mean motel owner Mr. Yao finds out, they’ll be doomed!


Mia’s parents are struggling first generation Chinese immigrants, like my own parents. My parents came to America with $200 in their pocket. To get by, we worked in manual labor jobs. From when I was eight to when I was twelve, I managed the front desk of three motels in Southern California while my parents cleaned. At one motel, there was a huge hole in the roof, and we slept at night staring up at the stars, shivering in our thin blankets, praying it wouldn’t rain. My parents were jolted awake by the sound of the buzzer every night. They never got a good night’s sleep.

Like my parents, Mia’s parents didn’t think there was any other way. “We’re immigrants. Our lives are never fair,” Mia’s mom says in the book. But Mia doesn’t believe that’s the way it has to be and is determined to change their fate. 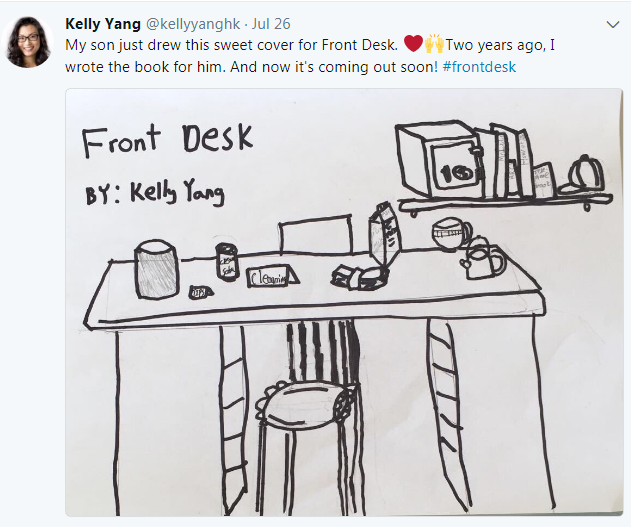 Did you know Mr. Yao has a son named Jason? Mr. Yao is the ruthless owner of the motel. He bullies the Tangs and works them to the bone. His son Jason is the same age as Mia and goes to the same school. At school, they both share the secret that Mia is essentially Jason’s family’s employee. As Mia’s parents struggle to deal with Mr. Yao, Mia struggles at school with her relationship with Jason. I loved writing the Mia and Jason scenes, as painful as they were for Mia (Jason’s such a pill to her). I loved how her relationship with Jason pushed Mia and made her grow as a person and likewise for Jason!


School libraries saved my life. I am where I am today because of libraries. I still remember being 8 years old, living in the motels, wondering if I would ever get out of there. The librarians at my school library and at my neighborhood library gave me wings to fly. Those wings came in the form of books.

I went on to enter university at the age of 13 and graduate from UC Berkeley and Harvard Law School. I owe it all to the wonderful librarians of this country who looked at me and didn’t see a poor motel girl with messy hair and tattered pants. They saw a girl with potential. And they handed me a book.

Mr. Schu, you should have asked me why I wrote and re-wrote FRONT DESK three times! I first wrote FRONT DESK in the summer of 2015. I’d been looking for a way to tell my son about my childhood, in a way that didn’t scare him but inspired him. The first draft was light and funny, which my son adored. But as I worked more on the manuscript, I felt there was room for a deeper and more meaningful story. So I rewrote the book and it got acquired. Then, the world changed and suddenly, it wasn’t just about my son anymore. It was about kids all over the country – kids, who like me, lived on the wrong side of town, had parents who worked two, three jobs, didn’t have health insurance, didn’t always get enough to eat. So I rewrote the book again, this time digging deep into the shame and pain and joy of my childhood until my words looked so open and exposed. I won’t lie, Mr. Schu, I’m a little scared. But when I showed the final manuscript to my son, he not only got it, he loved it. My greatest hope for FRONT DESK is that when kids read this book, they’ll be filled with empathy and courage and hope. 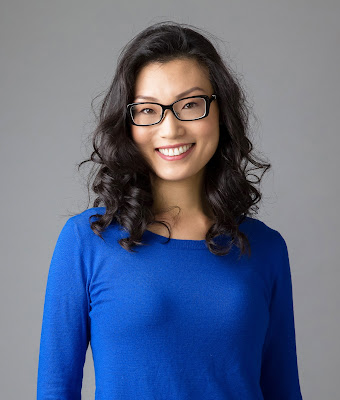 Kelly Yang’s family immigrated from China when she was a young girl, and she grew up in California, in circumstances very similar to those of Mia Tang. She eventually left the motels and went to college at the age of 13, and is a graduate of UC Berkeley and Harvard Law School. She is the founder of The Kelly Yang Project, a leading writing and debating program for children in Asia and the United States. She is also a columnist for the South China Morning Post and has been published in the New York Times, Washington Post and the Atlantic.