I have revealed many covers and book trailers, but this is my first time revealing an excerpt from an audio book. I think you're going to enjoy listening to Joshua Manning's exquisite narration of The Mad Wolf's Daughter. Go ahead, press the ORANGE button!


Here is the text of the first chapter, just in case you want to start at the beginning of the story.

THE SHAPE IN THE WATER

The fog drew back upon the dark sea and revealed a gleaming point like a ship’s bow, which seemed to nod at the girl brooding by the glowing bonfire.

“What’s that?” Drest leaned forward, her hand on her dagger.

Her elbow dug into the shoulder of her brother Gobin, who lay with his arm slung over the fringe of his coal-black hair.

“There’s something in the sea.”

“It’s something wooden on the waves just past the dragons’ teeth.”

His eyes flicked open, then closed. “Drest, dear, it’s a dream. Lie back. If you want to stay out here with us, you need to sleep.”

Drest crept around the fire to Nutkin, Gobin’s twin, who lay in almost the same position, except it was his hand, not arm, that held back his black hair.

“I’m not awake, either,” Nutkin said, a smile tweaking his lips.

“We come home from war and you’re jumping at every sound,” muttered Uwen, her youngest brother.

“Go to sleep, you crab-headed squid gut, or I’ll make
you sleep in the cave with the snails.”

Drest crawled back to the water’s edge. The sea was quiet. The night mist had swept in again. She listened, unmoving, the wind’s fingers riffling her short and uneven brown hair.

Grimbol, her father, had always said that no boat or ship could reach their tight, protected cove, that the dragons’ teeth—the stones scattered over the harbor—were hungry for wood and men. And no man or devil would dare draw near the headland while her brothers and father were home.

Yet something was there.

Drest left the circle by the fire where her family slept and scrambled up the boulders behind the camp. She climbed over the crumbling stones, dead tree roots, and clumps of gorse, past the crag that looked over the spot of rocky beach where her brothers kept their boats, then higher, until she came to a point where the sea opened up before the headland. Above her rose the path to the cliffs. Behind her lay the caves where her family kept their supplies and slept when it rained. Over the water, the ash-gray fog stretched like smoke. Drest closed her eyes and listened.

Her father and brothers, snoring from below.

Not just a creak, but a scrape as well, the rasp of wood on stone in the cove just past the dragons’ teeth. She knew that sound: a boat. And it was landing.

Drest flew down the uneven cliff side, blind in the darkness but knowing her way. She pounded back into the camp toward the glow of the bonfire, and dropped to her knees beside her eldest brother.

“Wulfric, there’s a boat in the water!”

Wulfric opened his eyes a crack. “What are you saying, lass?”

Heads rose around her. Her father turned over with a growl.

“Nay, it’s not that! I heard a boat.” Drest stood, wincing at her brothers’ shaking heads. “Lads, I saw it!”

“Keep your grub-spotted nightmares to yourself,” Uwen mumbled from beside the fire.

Her brothers settled down again, grunting and grumbling, until she was standing alone.

“Why won’t you listen? Do I ever tell stories? Lads, there’s a boat out there.”

Drest opened her mouth, but before she could say anything more, the camp was bright with flames. 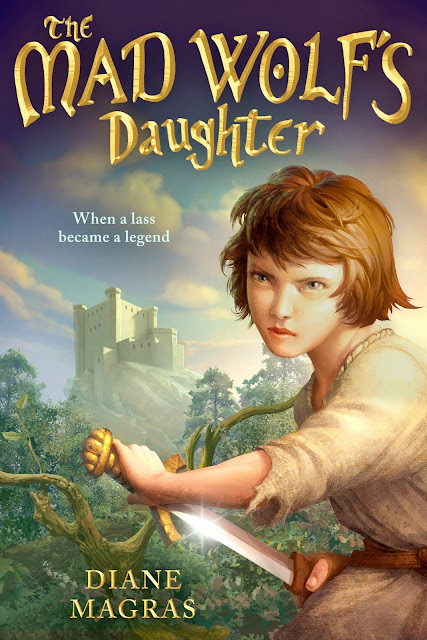 A Scottish medieval adventure about the youngest in a war-band who must free her family from a castle prison after knights attack her home—with all the excitement of Ranger’s Apprentice and perfect for fans of heroines like Alanna from The Song of the Lioness series.

One dark night, Drest’s sheltered life on a remote Scottish headland is shattered when invading knights capture her family, but leave Drest behind. Her father, the Mad Wolf of the North, and her beloved brothers are a fearsome war-band, but now Drest is the only one who can save them. So she starts off on a wild rescue attempt, taking a wounded invader along as a hostage.

Hunted by a bandit with a dark link to her family’s past, aided by a witch whom she rescues from the stake, Drest travels through unwelcoming villages, desolate forests, and haunted towns. Every time she faces a challenge, her five brothers speak to her in her mind about courage and her role in the war-band. But on her journey, Drest learns that the war-band is legendary for terrorizing the land. If she frees them, they’ll not hesitate to hurt the gentle knight who’s become her friend.

Drest thought that all she wanted was her family back; now she has to wonder what their freedom would really mean. Is she her father’s daughter or is it time to become her own legend?