Hello, Gillian McDunn! Happy Friday! Thank you for answering my questions and for celebrating Caterpillar Summer’s cover with me.

Gillian McDunn: Thanks for having me, Mr. Schu! I’m very happy to be here.

I'm happy you're here. What ran through your head the first time you saw Alisa Coburn’s cover illustration?

I was in Target when I got the email from Bloomsbury. Of course I opened it immediately, right there in the cereal aisle.

When I opened the image, I was stunned. The way Cat and Chicken hold hands, the beach, the water, Chicken’s toy shark, the light that shines around them -- Alisa did a fantastic job. I love everything about this cover.

My most favorite part is Cat and Chicken themselves. When I looked at their faces, I had that feeling of recognizing them, like you do with a friend. “Well, hello, Cat and Chicken. There you are.”

And then I cried a little. At Target. Still in the cereal aisle. 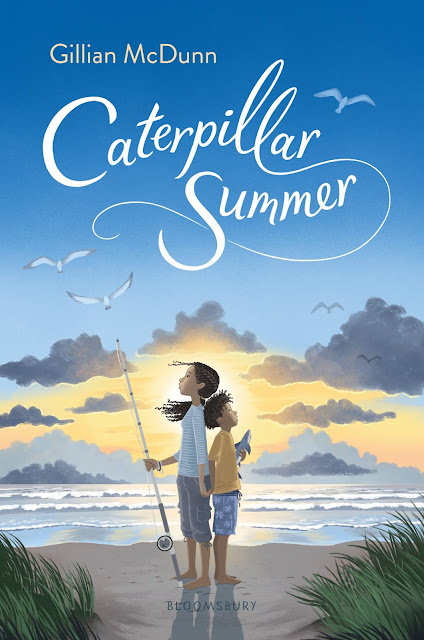 Oh, I love that you were at Target when you saw the finished cover.What planted the seed for Caterpillar Summer?

The relationship between Cat and her younger brother, Chicken, is central to the story. Like Cat, I am also a big sister -- I grew up with two younger brothers. My middle brother, Andy, had many disabilities. We had a very special relationship, and I took a lot of pride in being his big sister. I drew on some of my experiences when writing Cat, who loves Chicken more than anything. She also loves being the person who knows what he needs. At the same time, she’s also ready to move beyond the “perfect” big sister role she’s been playing. When they show up on that island to stay with grandparents they’ve never met, their world is shaken up enough that Cat gets to step outside of that role.

1-Her nickname is Caterpillar.

2-Caterpillar is also a character in her mom’s picture books, which are based on the relationship between Cat and her brother.

3-She does NOT want you to call her Caterpillar. Don’t even think about it.

Story is the way we figure out the truth. (And fiction is full of truths.)

Mr. Schu, you should have asked me what are Cat’s grandparents like?

Cat and Chicken have never met their grandparents until now, and Cat is determined to find out why. Her first impression of Lily is that she is kind and well-meaning, even if she doesn’t always know the best way to act with Chicken. Macon is different altogether. He’s always disappearing into his workshop, and Cat’s pretty sure that he is annoyed by them being there. But after she overhears a conversation between Lily and Macon, Cat decides there may be more to him than what’s on the surface.