Unboxing The Iliad | A Guest Post by Gareth Hinds

Happy Wednesday! Gareth Hinds dropped by to share a video of him unboxing The Iliad. Thank you, Gareth! Congratulations!!!

I hope the video that accompanies this post conveys the silliness that goes on in my house, when I'm not laboring at my drawing board to adapt beloved texts as graphic novels. It's always an amazing thing when a book you've worked on for years shows up on your doorstep as a finished book.

Each of my graphic novels has been a complex undertaking, but none more so than The Iliad. Because I know The Iliad can be a challenging read – even for adult readers – with this adaptation I’ve tried hard to remove or reduce some of the barriers to readers’ enjoyment of the story. Modern readers often find the full text long and intimidating, dense with details and asides that slow the story. One of the joys of adapting this text to graphic novel form was being able to represent complex ideas pictorially, culling unnecessary passages, and focusing on the most important moments, themes, and characters. And boy are there a lot of characters – many of them with similar-sounding names!

To help readers tell characters apart I created a distinctive helmet and shield design for each one, inspired by or suggestive of their character traits. I incorporated the first letter of each character’s name as a stylized initial on their breastplate (and usually also their helmet) – an “H” for Hector, “A” for Agamemnon, and so on. All of these characters also appear on a “cast of characters” spread at the front of the book that readers can flip to at any point for reference. While armies in the age of the Trojan War did not wear color-coded uniforms, I’ve used a distinctive palette for each of them here, to help readers tell them apart on the battlefield. And to help with the geography of the battlefield I’ve included maps and overviews of the terrain.

The Iliad was originally performed for audiences who would have had in-depth knowledge of the characters, history, culture, and mythology of the Greeks and Trojans. To bring contemporary audiences up to speed, I've included a prologue that sets the stage plus extensive author notes that help provide important context for the Trojan War and explain elements of Bronze Age society. In those notes I also share some of the choices I made when the historical record was lacking or when Homer left things open to interpretation.

I’ve heard many educators say they have insufficient time to teach both The Iliad and The Odyssey and are therefore forced to choose between the two, or read only excerpts of each. By bringing these stories to life as graphic novels, I hope to allow students to more quickly and easily read, understand, and get beyond the surface level of the story – and I hope that will make it possible for more teachers to teach both The Odyssey and The Iliad, helping more students understand and appreciate both of these monumental works and all they have to teach us about our own history and culture. 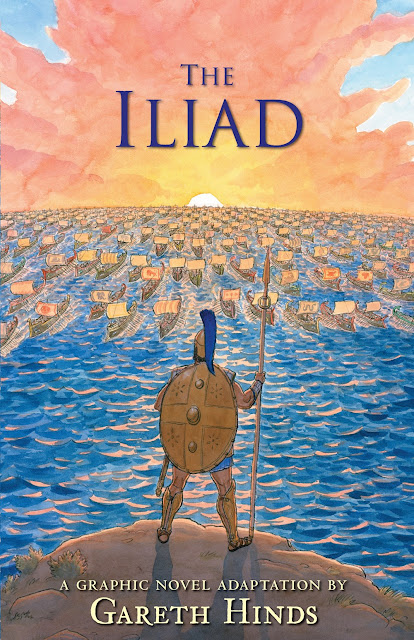 In a companion volume to his award-winning adaptation of The Odyssey, the incomparable graphic novelist Gareth Hinds masterfully adapts Homer’s classic wartime epic.

More than three thousand years ago, two armies faced each other in an epic battle that rewrote history and came to be known as the Trojan War. The Iliad, Homer’s legendary account of this nine-year ordeal, is considered the greatest war story of all time and one of the most important works of Western literature. In this stunning graphic novel adaptation — a thoroughly researched and artfully rendered masterwork — renowned illustrator Gareth Hinds captures all the grim glory of Homer’s epic. Dynamic illustrations take readers directly to the plains of Troy, into the battle itself, and lay bare the complex emotions of the men, women, and gods whose struggles fueled the war and determined its outcome. This companion volume to Hinds’s award-winning adaptation of The Odyssey features notes, maps, a cast of characters, and other tools to help readers understand all the action and drama of Homer’s epic.
Email Post