Hello, Sarah Albee! It is always a SUPER day when you drop by to celebrate books.

Sarah Albee: Hey, Mr. Schu! It’s a pleasure to be back! Thanks so much, as ever, for having me.

Thank you for being back! Are you up for finishing my sentences?

Accidental Archaeologists: True Stories of Unexpected Discoveries’ cover made me whoop with delight when I saw it in its final rendition. The illustrator, Nathan Hackett, managed to sum up what the book is about with humor and historical accuracy.

Should we show it to everyone now, Mr. Schu? 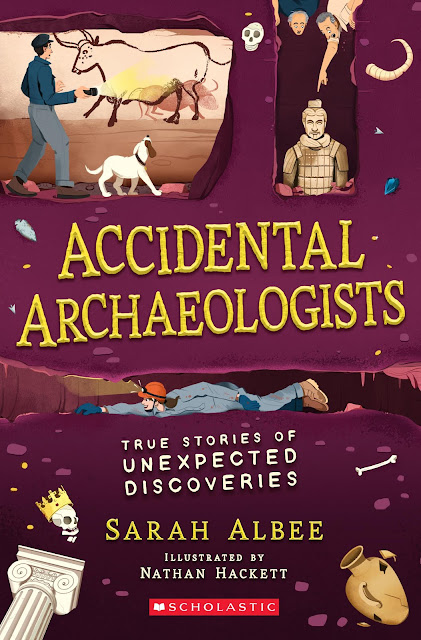 The idea for the book came to me while I was writing my last book (North America: A Fold-out Graphic History). My North America editor asked me to add another entry for the 20th century page, in the Mexico section. After two days of reading newspaper headlines from 20th century Mexico, I found this story: In 1978, a utility worker in Mexico City was laying cable fifteen below the street. His shovel struck a stone. It turned out to be a huge, carved, circular stone, and when archaeologists were called to the scene, they realized he’d discovered the ruins of an Aztec temple. And not just any old temple--it was the Templo Mayor, the Aztecs’ largest and most sacred temple. And I thought—Hmmm. What if I wrote a whole book about accidental discoveries by ordinary people? And the rest, as they say, is history. 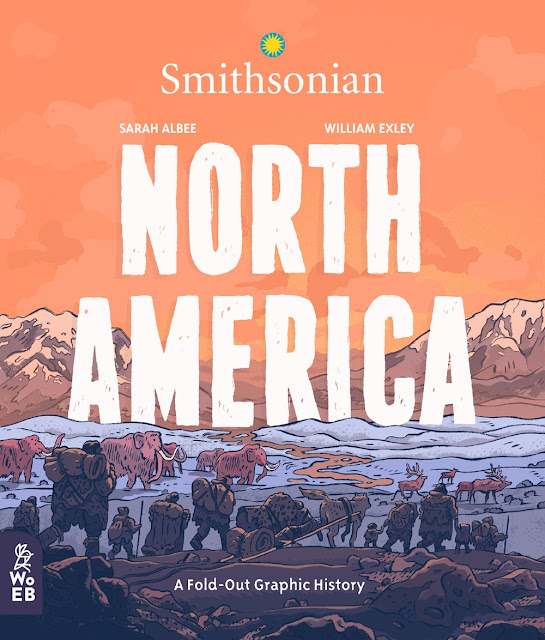 Archaeology has come a long way in the past few decades. In earlier times, archaeological discoveries were nearly always made by white male Europeans who traveled to promising places, dug up artifacts, human remains, and sacred objects, and then shipped off whatever they thought was of scientific or monetary value. Luckily that way of thinking has changed. Today legitimate archaeologists follow strict legal and ethical guidelines. Nowadays, many countries have passed laws that prohibit artifacts and human remains from leaving their place of origin. 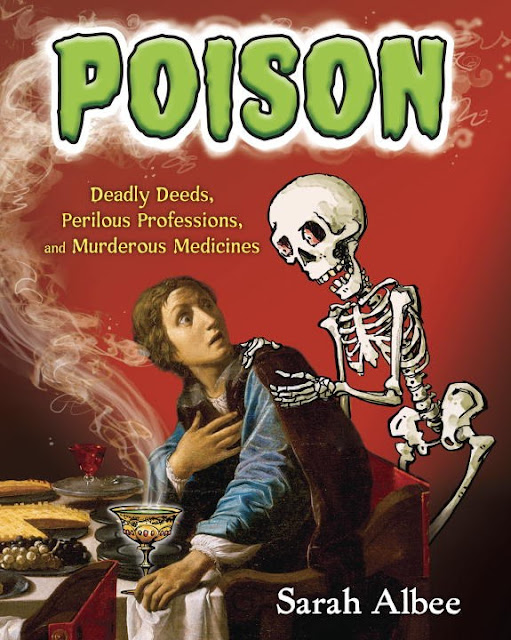 Did you know that a teenage Bedouin boy looking for his lost goat discovered the Dead Sea Scrolls? Or that scraps of Sappho’s poems were used to line the insides of a sarcophagus in Egypt? Or that a formerly-enslaved cowboy in New Mexico uncovered evidence that proved humans had lived in North America ten thousand years earlier than historians had previously thought? Neither did I! But all these and more are in the book.

I hope Accidental Archaeologists: True Stories of Unexpected Discoveries will show kids that history is constantly changing. There’s still so much more to learn about our past. New archaeological discoveries happen all the time, and sometimes what’s uncovered can cause us to question much of what we thought we knew. As new discoveries are made, archaeologists and historians continually reinterpret and reframe their perspectives on human history. 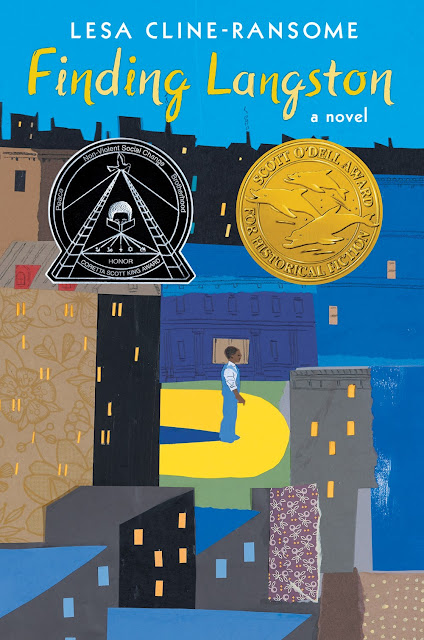 Mr. Schu, you should have asked me what I’ve been reading recently. I just finished Finding Langston by Lesa Cline-Ransome, a middle grade novel with an unforgettable main character, set during a fascinating time period (the Great Migration). And, coincidentally, I also read and loved a picture book written and illustrated by Lesa’s husband, James Ransome. It’s called The Bell Rang, and is a powerful, beautifully-illustrated story that ends on an uncertain note—the family is left to wonder about the fate of their loved one who fled enslavement. 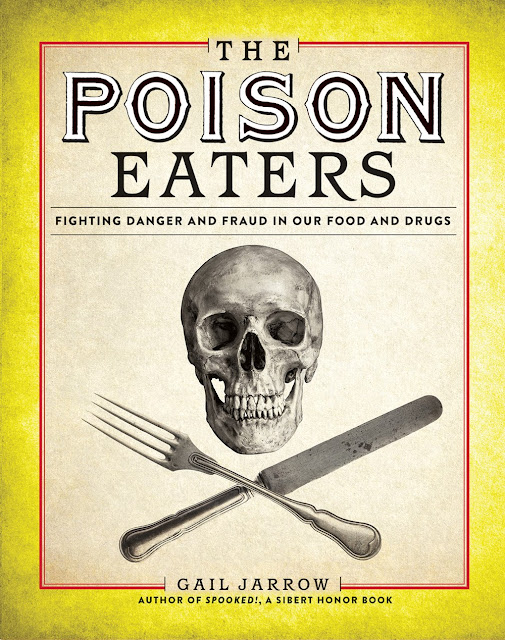 And in the nonfiction category—I really enjoyed Gail Jarrow’s The Poison Eaters. I’ll admit I was apprehensive that there would be overlap with my own book about Poison (cleverly titled Poison, published by Random House in 2017). But I shouldn’t have worried. I’m a huge fan of Gail’s work, and while sure, there’s some overlap, our two books could work well studied side-by-side by kids looking at books on similar topics told with different voices and from different angles. The Poison Eaters is a fantastic book. 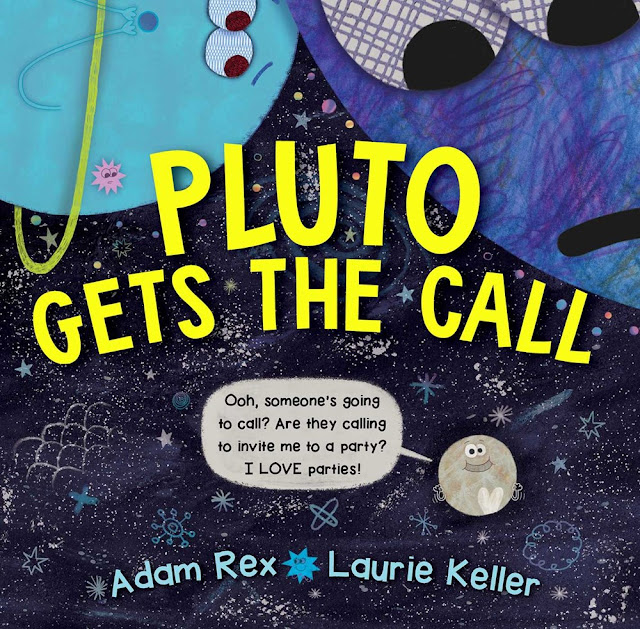 And one more—I laughed out loud reading the picture book by Adam Rex and Laurie Keller, Pluto Gets the Call. It’s not nonfiction—the personified planets talk on cell phones and make silly jokes—but kids will learn a lot about the solar system in an extremely delightful way. 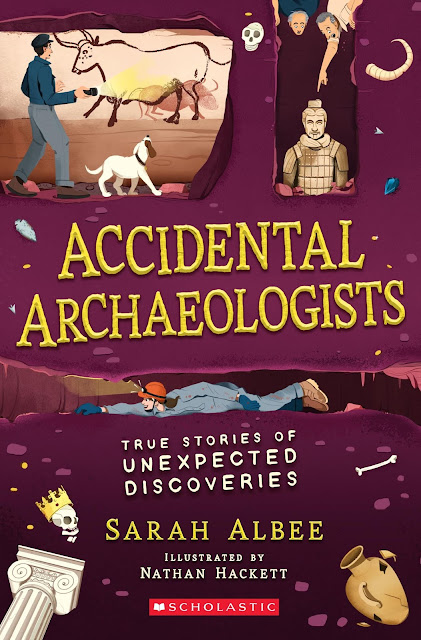 Secret treasures are buried all around us -- you just have to look for them!

Accidental Archaeologists takes you on an adventure through time to relive some of the coolest surprise discoveries by totally ordinary people all over the world. Meet:

- The cowboy who found a prehistoric skeleton
- A famous king buried underneath a parking lot
- The team who found New York City's hidden African Burial Ground
- A boy who finds the Dead Sea Scrolls while looking for his lost goat
- And many more.

Packed with incredible stories and expert tips for making your own exciting finds, this is an accessible, action-packed introduction to the world of archaeology.