Sheetal Sheth: Hi!! Thank you so much for having us. Every time I look at this cover, I get chills. It perfectly encapsulates that feeling of being on a precipice...on the verge of something great. It’s Anjali making sense of her ‘light.’ It has magic, music, and mystery. The rich colors and the details are a testament to Lucia Soto’s talent and vision. You know you’re in for something special when you see this cover! 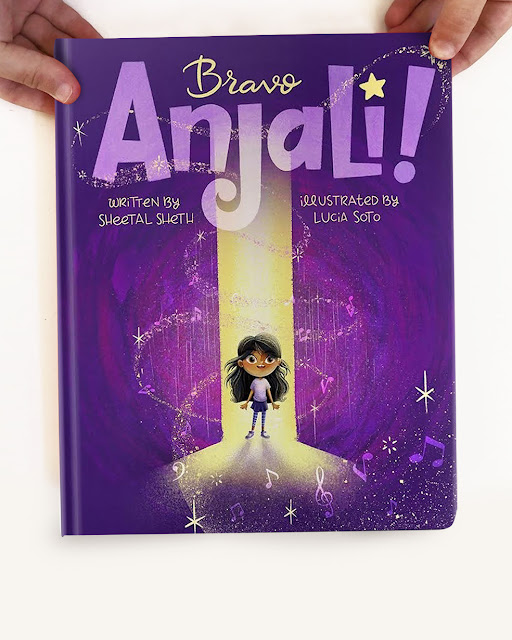 Scenario: During a virtual visit with 2nd graders in Atlanta, Georgia, the teacher asks you to booktalk Bravo Anjali! What would you share with the class?
Sheetal Sheth: I would start by asking the class if anyone has ever felt like they were really good at something but were shy about it? Or didn’t feel like they could fully celebrate it because they were afraid of what others may do/think? We would then have a discussion about why they should never feel bad about being good at something. I’d talk about the journey Anjali goes on in Bravo Anjali! and then encourage each student to stand up and share something they were good at with the class. 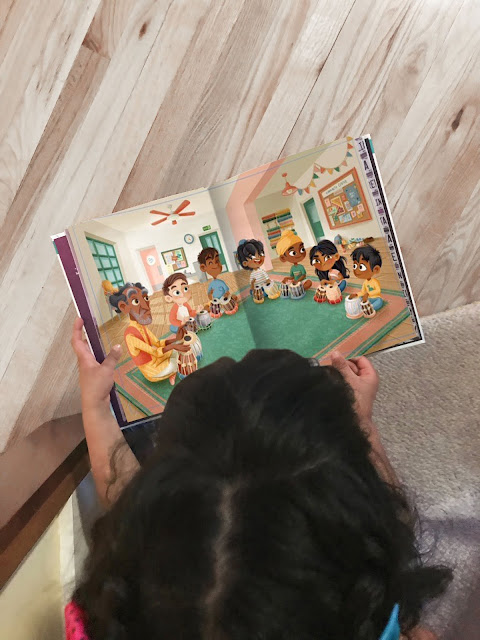 Thank you! What planted the seed for Bravo Anjali!?
Sheetal Sheth: Well first, I couldn’t believe that there wasn’t a picture book series with a South Asian hero. I knew when I wrote Always Anjali, I wanted to change that. I have been so grateful for the success of that book and continue to hear from so many parents, teachers, and children about what that book means to them…and will there be more Anjali?! Like Always Anjali, I hooked into what I have dealt with in my life. Thought about the stories I hear from people I meet. And then tried to put it into a context that would be accessible for children. I love tackling ‘harder’ topics in kid lit. I think the industry shies away from certain things as they think it’ll be too hard for kids to understand. When in fact, it’s the exact opposite. Kids want to have these conversations. They are hungry for ‘real talk.’
When I was writing Bravo Anjali! I thought about how much we have missed out on from marginalized communities. I am deeply saddened by the fact that I know we have lost out on some stellar ideas and work, particularly from women and BIPOC, who were never given the opportunities to live to their fullest potential.
I also wanted to layer in how hard friendships can be to navigate.
And finally, I knew I wanted to incorporate the tabla, a musical element, (that was an easter egg at the end of Always Anjali!). As the story took shape, I talked to a few female tabla players I knew who gave me invaluable insight. The scene where Anjali’s mom’s friend assumes the tabla is her dad’s is straight from these players. 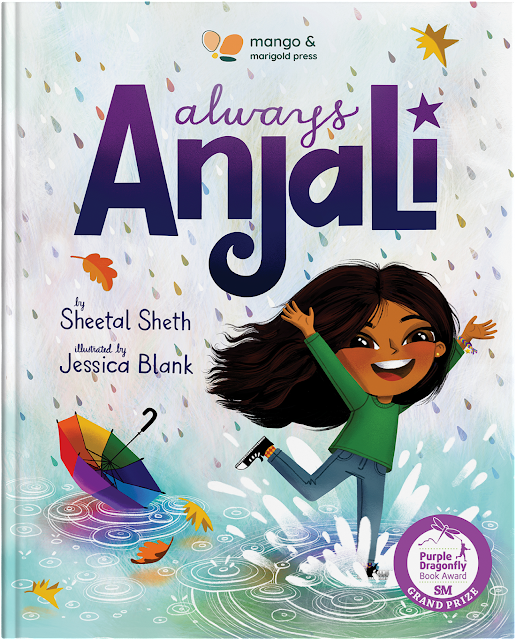 Please finish the following sentence starters:
Lucia Soto’s illustrations are divine. Working with her has been pure joy. She brings fresh ideas and immeasurable talent to the table. Her illustrations are sharp and detailed and I’m obsessed with the nuance of expressions she can create. As an actor, I appreciate this so much. It’s not easy to do and she makes it look effortless. I am so excited for everyone to see this book!
The tabla… there is no other instrument like it. And seeing an aficionado’s fingers and hand precision in play is nothing short of mesmerizing. It creates the most beautiful rhythms and can add a layer of brilliance to any track. I wish I could play!

Picture books are one of my favorite mediums of literature. They are vast and have the ability to do so much – the format makes for some really special work. It forces you to pare down and hone in. Pick your words carefully. You need less but you need the text and the illustrations to mean more. I spend most of my time at a bookstore in the PB section. There truly is no age too young or too old to enjoy them and there is always room for one more.

Mr. Schu, you should have asked me if there was a 3rd book and what it’s about! ☺ 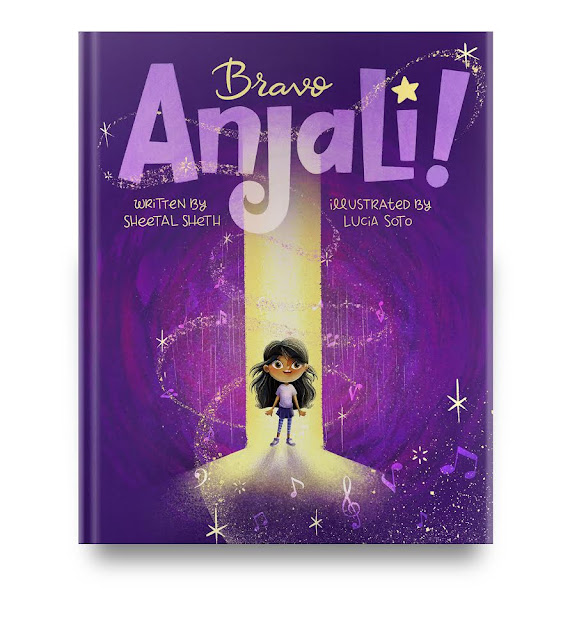 Look for Bravo Anjali! in September 2021.
For Anjali, playing the tabla is something that comes naturally. She loves the feel of the drum beneath her fingers and getting lost in the music. But when the boys in her class give her a hard time for being better than them, she messes up on purpose.

When her teacher announces a contest where the winner will get to perform with him at his next concert, Anjali is perplexed. Winning the contest would be a dream for Anjali. But it seems like the better she gets, the meaner some of the kids are.

In this follow up to Always Anjali, Anjali realizes that she should never let anyone make her feel bad for being good at something. An important story for all children to remember to 'never dim their light.' 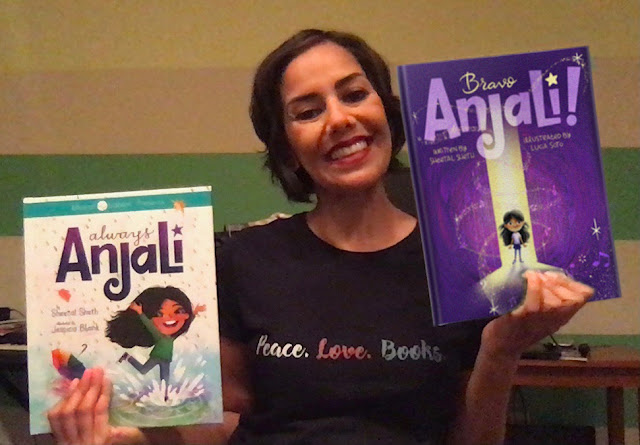 Sheetal Sheth is an acclaimed actress, producer, author, and activist. She is known for her provocative performances in a wide range of memorable roles on film and television. She has starred in over 20 feature films and many TV shows and is a favorite in the independent film world, having won five best actress awards on the film festival circuit. She has earned a loyal, international following. Sheetal began her career at a time when few South Asians were making their living as actors. Despite being told she'd have to change her name to work, her successful career has trail-blazed paths for other women of color across media. Sheth supports marginalized communities not only through her own pioneering work as an actor, but by also appearing at workshops and panels and speaking directly to issues facing those communities. She is known as an outspoken advocate and has delivered talks and keynotes at festivals and charity galas. She's had op-eds published on CNN, The Daily Beast, and Thrive Global. She served in President Clinton's AmeriCorps and is currently on the advisory board of Equality Now and an ambassador for CA First Partner, Jennifer Newsom's, The Representation Project. 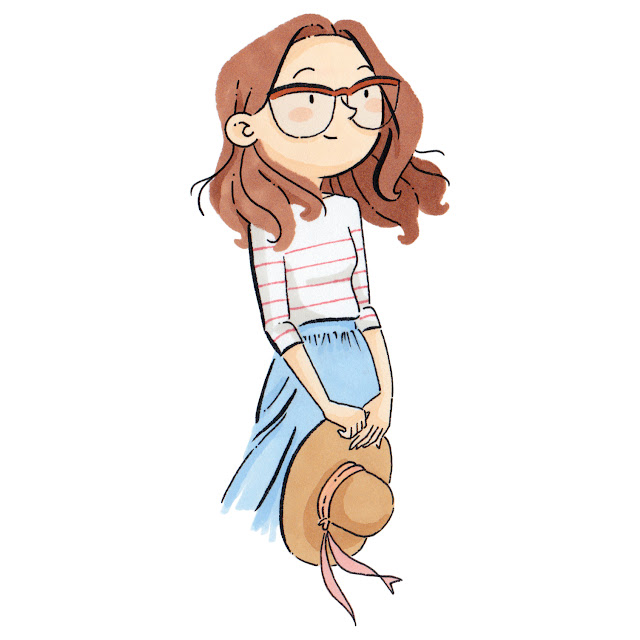 Lucia Soto was born in a seaside town in northwestern Spain and grew up in a sunny town in the Mediterranean. She has lived in different places and is now based in London, where she lives with her husband and a tiny palm tree. She went to Art School graduating in Design and Plastic Arts and, after a few years working as an Art Director in a busy advertising agency, decided to pursue her lifelong passion for drawing and she has never looked back.
She is interested in people and their stories through time and this is a major influence in her work. She finds inspiration in art and illustration from the early 20th century, vintage travel magazines, and the light of the Mediterranean as the landscape of her childhood.
Aside from drawing, Lucia loves Julie London, Art Deco, overdressing, and walking everywhere. She spends her days drawing things that are half nonsense and a half all sense, the stuff that makes her life silly and beautiful.
Email Post