Hello, Tricia Elam Walker! Welcome to Watch. Connect. Read.! Congratulations on winning the 2021 Ezra Jack Keats Writer Award for Nana Akua Goes to School. What does receiving this award mean to you?

Tricia Elam Walker: Winning the Ezra Jack Keats award for Nana Akua Goes to School touches me deeply. When I was a young child in the late 1950s, my mother, a children’s librarian and picture book lover, desperately sought books that reflected us and our experiences and was bereft at the dearth. She wanted such books for all children, not just for hers and not just for children of color. She understood the world would be a better place if everyone knew of our value and contributions.

That’s why I remember how thrilled she was when The Snowy Day by Ezra Jack Keats appeared circa 1962. I was around 8 by then but still young enough to appreciate the specialness of this book, the warm velvety brown of Peter and his mom, the familiarity of snowy hills (we grew up in Boston) and the soft, quiet ordinariness of the story itself. It was perfect for the time because it didn’t shout it’s arrival; it spoke in a calm, measured and endearing tone so readers gently learned the lessons of diversity and acceptance embedded in those pages. Thus, my mother was the first person I thought of when I learned I won the award. The tears flowed when I pictured her pride, looking down from her heavenly reading chair.

I’m so grateful to the Ezra Jack Keats Foundation. This award means everything: that my work is being seen and well regarded, that my mission to illuminate and celebrate difference is appreciated and rewarded, and that maybe more people, especially children of all colors, will seek it out. 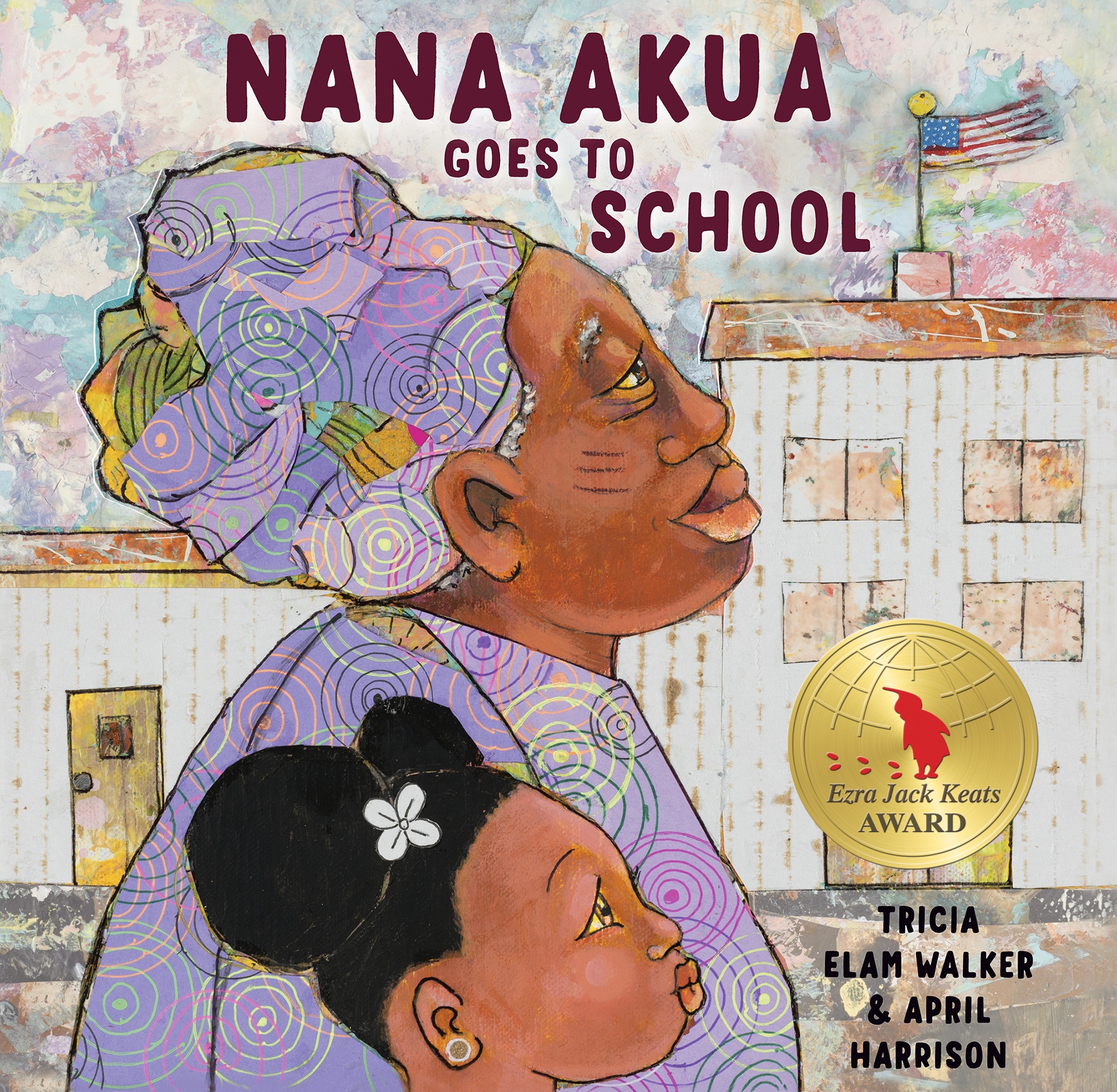 Scenario: Imagine you’re booktalking Nana Akua Goes to School to 200 second-grade teachers. What do you share with them?

Tricia Elam Walker: I would love such an opportunity and I would first share how the idea sprouted: I’m a Buddhist and I chant about everything but especially things that I want/need to go well. I had the book contract but my agent didn’t like any of my ideas. I chanted to come up with a great idea while I was at a friend’s house who had African masks near his altar. As I was chanting I almost felt those masks speaking to me, leading me to the story. (I’m sorry if this sounds hokey – it’s true!). At first I thought I’d write about a little girl who had the ethnic markings on her face and got teased but later when I researched the idea, I learned that it would be someone from an older generation because this tradition is no longer commonplace. That’s when I decided it would be her grandmother’s markings she was concerned about.

I’d ask them what they think the book is about. I hope they’d say that it’s about the importance of cultural differences: learning about them as well as celebrating them.

It’s also about family and sharing and the natural desire to protect the ones we love. I’d emphasize that I wanted to show how children share that very grown-up concern too. The book is also about the importance of cultural symbols like the Adinkra ones on Zura’s quilt. So it’s about loving and owning your differences and explaining them proudly when the situation calls for it. 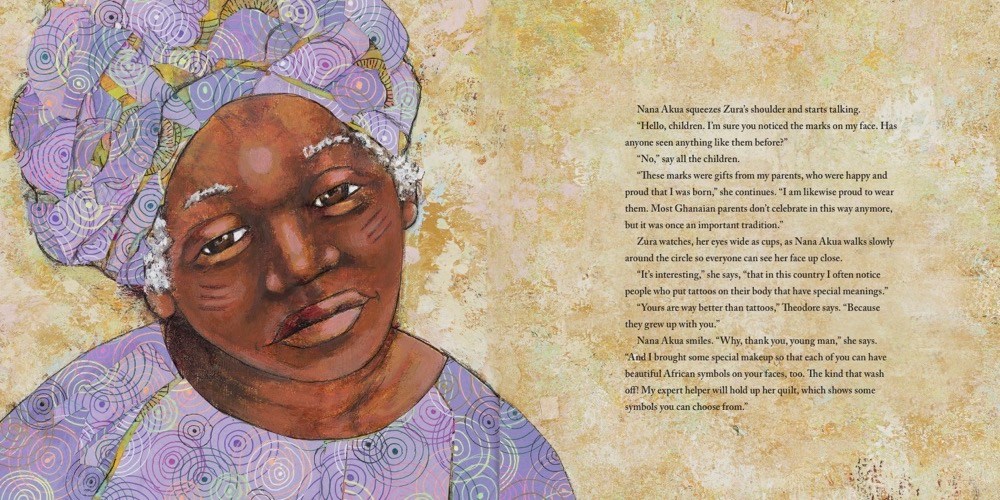 Please finish the following sentence starters:
April Harrison’s illustrations breathed life into characters who lived only in my head. Publishers tend not to encourage writers and illustrators to talk amongst themselves when working on a book. (I’m not sure why that is.) First I need to tell you that I had a print of April’s hanging on my wall for some twenty or more years and did not know it was hers until a friend pointed it out. That makes me know that she and I were meant to collaborate! In any case, April and I did have a brief conversation in the beginning though and she asked me if there was anything of particular importance to me. I told her I wanted Zura to have natural hair, I wanted a diverse classroom and for Nana Akua to have a warm, loving face. She did it all and more! It was breath-taking to see the final products. (By the way she said she used Trevor Noah’s grandmother as inspiration!) She’s an amazing person along with being a magnificent artist. I hope we get to work on another book together soon!

Did you know that the Adinkra symbols have existed for a very long time? Many, many, many years ago they were reserved for royalty and solemn occasions like funerals. These symbols are everywhere now: on jewelry, tee shirts, clothing, furniture and more. My daughter found some etched into the concrete in Seattle and I saw some woven into the iron filagree on houses in New Orleans. They are also found throughout the Black Panther movie (mostly the wawa aba symbol). April hid some other Adinkra symbols in the book’s pages for children to discover! 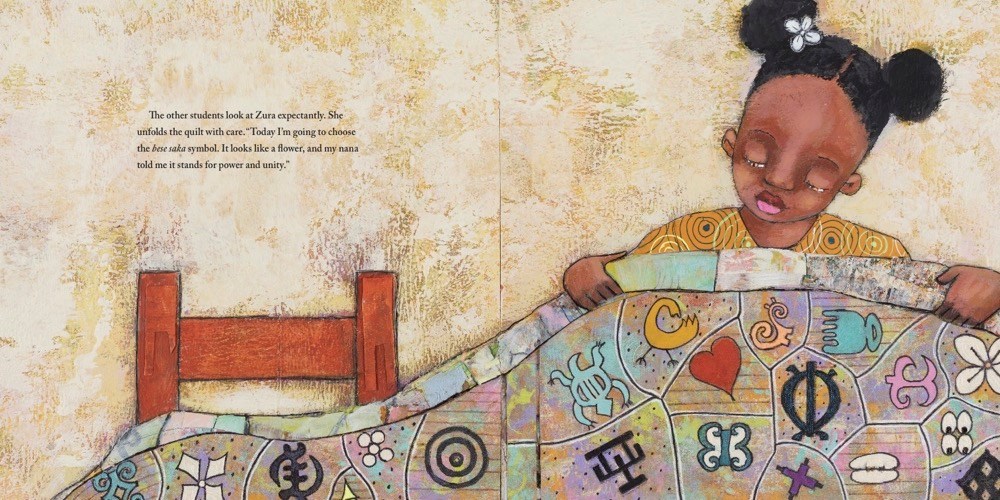 Picture books are the greatest books on earth, according to my mother. She read stacks of them at a time and believed they could solve the world’s problems. They also are for everyone, not just children. She gave them as gifts to grownups so now I continue her tradition. People are surprised but have come to appreciate this gesture. I also heard an author recently say that it’s an honor to write for children because picture books are the first to imprint an idea in their young minds. I whole-heartedly agree and feel honored and lucky to take part in such an important task.
Thank you, Tricia Elam Walker! 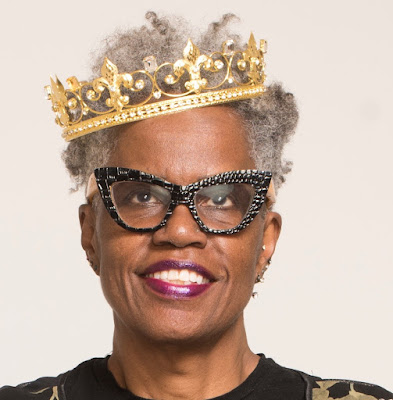 Tricia Elam Walker is the author of the novel Breathing Room, among other publications. She is an award-winning fiction and nonfiction writer, cultural and fashion commentator, and blogger who has written for National Public Radio, the Washington Post, Essence magazine, HuffPost, and more. She practiced law for sixteen years prior to teaching writing in Washington, DC, and Boston. Tricia is an assistant professor of Creative Writing at Howard University and is working on several projects, including children’s books, plays, and a second novel. 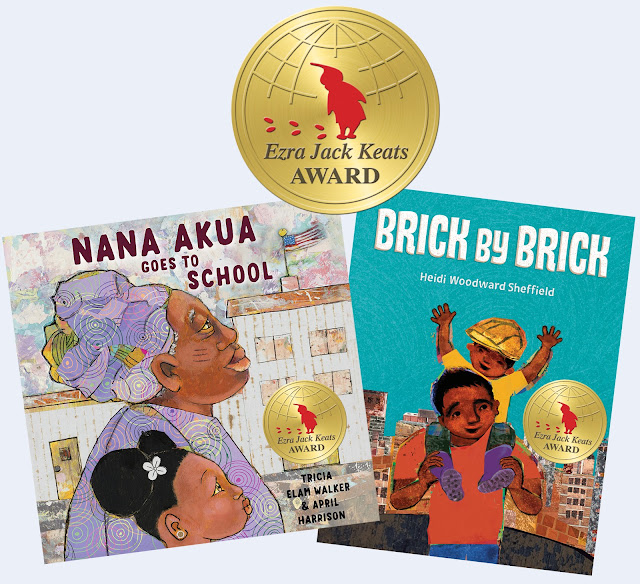 Look for my interview with Heidi Woodward Sheffield on Friday.
Email Post