Hello, Pam Muñoz Ryan! I miss seeing you at conferences, in airports, and catching up over a meal. I’m grateful we’re together today on my blog to celebrate Jacqueline Alcántara’s beautiful cover illustration for Solimar: The Sword of the Monarchs. Please tell us about the moment Jacqueline captures on the cover.

Today, I’m excited to tell you about this stunning cover by Jacqueline Alcántara. It represents Solimar, a princess who wants to be king, and her loyal pet, a resplendent quetzal named Lázaro. Solimar is wrapped in her rebozo, a silk shawl, that has been mysteriously infused with magic. She is set against the oyamel forest where the Monarch butterflies stop every year during their migration—a revered and sacred place to those who live in the fictional kingdom of San Gregorio in Mexico.

Pam, imagine you’re discussing Solimar: The Sword of the Monarchs with students. What do you share with them?

Pam Muñoz Ryan: Solimar leads a privileged life, yet she feels her voice will never be heard because she lives in a monarchy where her birth order and gender prohibit it. She has many opinions about what she should be allowed to do, and how to make her kingdom more representative for men and women. But, she struggles against “how things have always been.” It takes dramatic circumstances to prove herself and to upend the old ways. 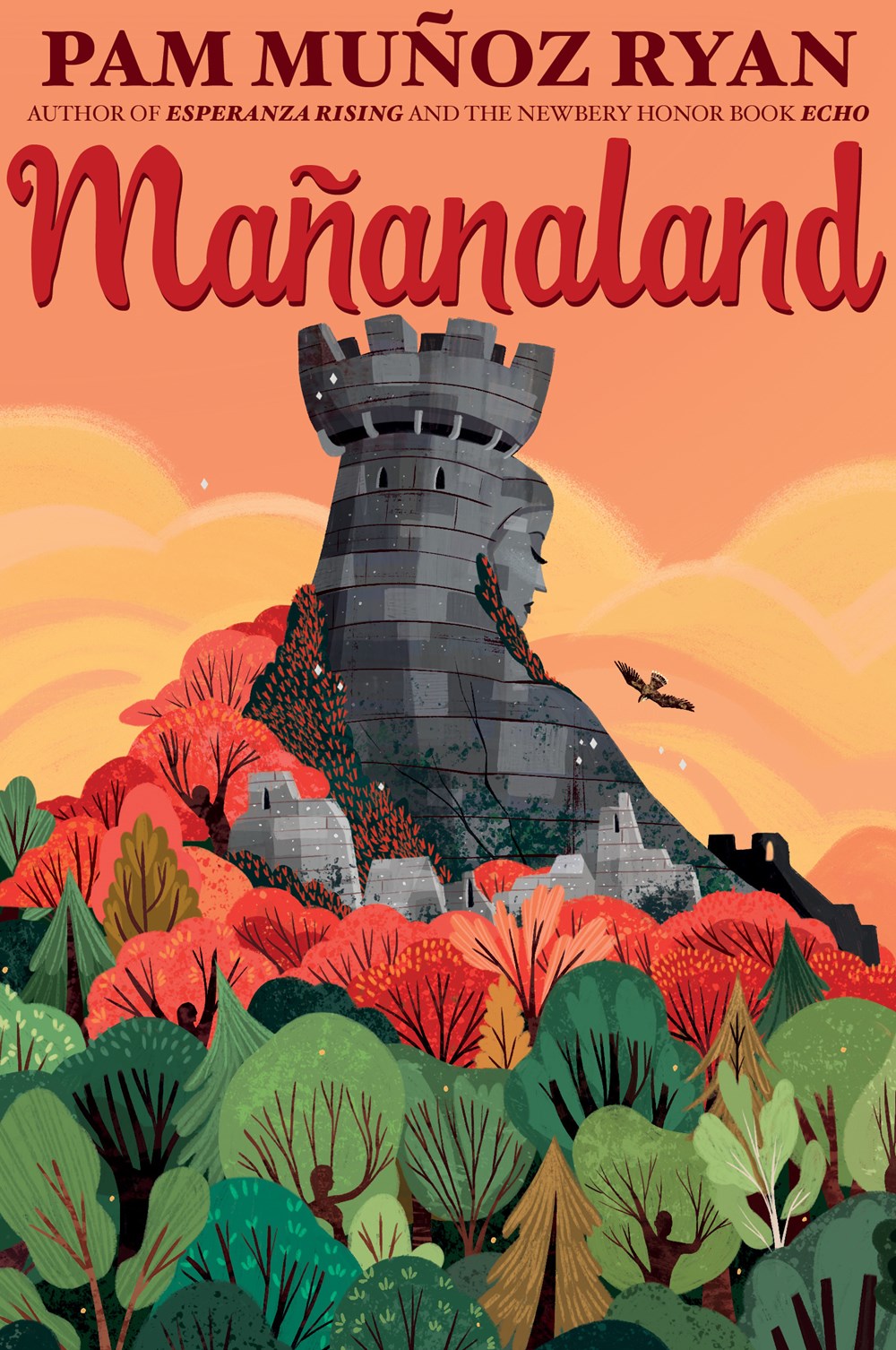 Please finish the following sentence starters:
Monarch butterflies are a mystery and miracle. The Monarch migration is remarkable, their transformation is mesmerizing, and as pollinators, their importance to the natural world is profound. Beyond all those good things are the myths and legends about the Monarchs that many cultures hold close to their hearts.

In my story, the villagers of San Gregorio believe the ancestors of the Monarchs inhabit the oyamel forest, and that the butterflies’ presence defines them, their culture, and their art. Solimar has vowed to protect the sacred firs and the butterflies. When they are threatened, it is not only the forest she must save, but her kingdom, as well.
There is magic and magical realism in the story, including an animated muñeca de trapo, a sassy rag doll named Zarita. I’ve also introduced a river boy, Berto, whose ingenious contraptions impress and aide Solimar during a perilous journey.

John Schu, you should have asked me…How did this story come about?

Some years ago, I was invited to Disney offices in California to meet with their publishing executives, including editor Samantha McFerrin. They asked me if I would be interested in creating a Latina princess story. It was an honor, and a unique opportunity I couldn’t resist.
Thank you! Congratulations, Pam! 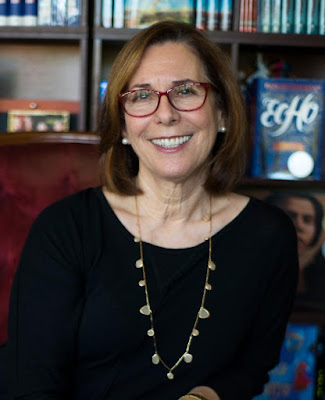 Pam Muñoz Ryan is a New York Times bestselling author and U.S. nominee for the international Hans Christian Andersen Award. She has written over forty books, including Esperanza Rising, Becoming Naomi León, Riding Freedom, Paint the Wind, The Dreamer, and Echo, a Newbery Honor book and the recipient of the Kirkus Prize. She is the author recipient of the National Education Association’s Human and Civil Rights Award, the Virginia Hamilton Literary Award for Multicultural Literature, and is twice the recipient of the Pura Belpré Medal and the Willa Cather Award. Other honors include the PEN USA Award, the Américas Award, the Boston Globe-Horn Book Honor, and the Orbis Pictus Award. She was born and raised in Bakersfield, California, but now lives near San Diego with her family. Many of her stories reflect her half-Mexican heritage. 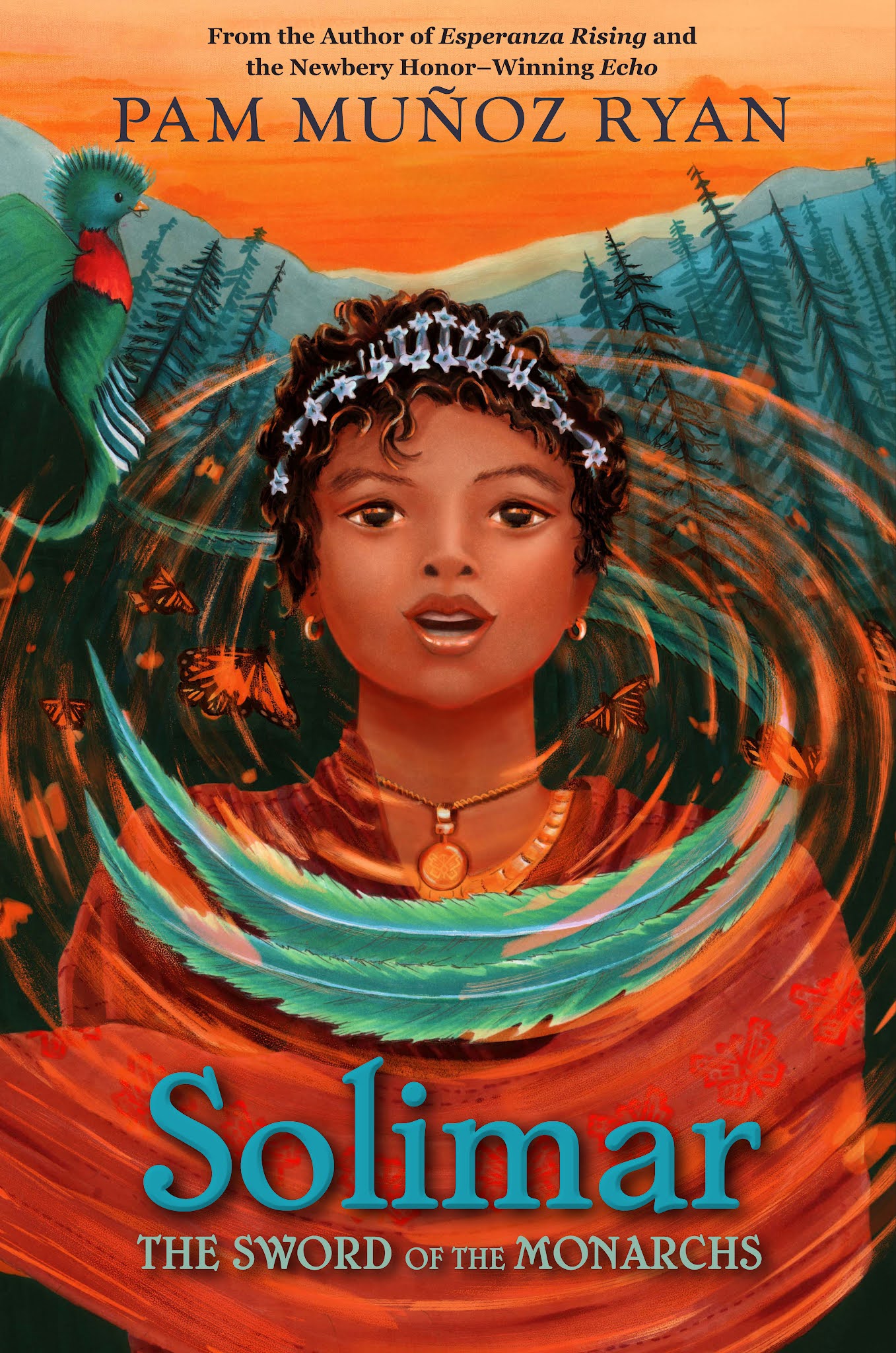 Look for Solimar: The Sword of the Monarchs on February 1, 2022.
Middle-grade fans of Pam Muñoz Ryan’s Esperanza Rising, will find a new Mexican heroine to love in Solimar and a fresh, magical story! On the brink of her Quinceañera, and her official coronation, Solimar visits the oyamel forest to sit among the monarch butterflies. There, the sun pierces through a sword-shaped crevice in a boulder, which shines on her and sends the butterflies humming and swirling around her.
After the magical frenzy, she realizes she's been given a gift—and a burden: she can predict the near future! She has also become a protector of the young and weak butterflies. This alone would be a huge responsibility, but tragedy strikes when a neighboring king invades while her father and brother and many others are away. The remaining villagers are taken hostage—all except Solimar. Can this princess-to-be save her family, the kingdom, and the future of the monarch butterflies from a greedy and dangerous king? Written for ages 8 to 12 by the Newbery Honor Medal winner of the highly acclaimed novel Echo.